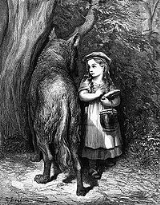 Overview
A fairy tale is a type of short story that typically features such folkloric
Folklore
Folklore consists of legends, music, oral history, proverbs, jokes, popular beliefs, fairy tales and customs that are the traditions of a culture, subculture, or group. It is also the set of practices through which those expressive genres are shared. The study of folklore is sometimes called...
characters, such as fairies
Fairy
A fairy is a type of mythical being or legendary creature, a form of spirit, often described as metaphysical, supernatural or preternatural.Fairies resemble various beings of other mythologies, though even folklore that uses the term...
, goblin
Goblin
A goblin is a legendary evil or mischievous illiterate creature, a grotesquely evil or evil-like phantom.They are attributed with various abilities, temperaments and appearances depending on the story and country of origin. In some cases, goblins have been classified as constantly annoying little...
s, elves
Elf
An elf is a being of Germanic mythology. The elves were originally thought of as a race of divine beings endowed with magical powers, which they use both for the benefit and the injury of mankind...
, troll
Troll
A troll is a supernatural being in Norse mythology and Scandinavian folklore. In origin, the term troll was a generally negative synonym for a jötunn , a being in Norse mythology...
s, dwarves, giants
Giant (mythology)
The mythology and legends of many different cultures include monsters of human appearance but prodigious size and strength. "Giant" is the English word commonly used for such beings, derived from one of the most famed examples: the gigantes of Greek mythology.In various Indo-European mythologies,...
or gnome
Gnome
A gnome is a diminutive spirit in Renaissance magic and alchemy, first introduced by Paracelsus and later adopted by more recent authors including those of modern fantasy literature...
s, and usually magic
Magic (paranormal)
Magic is the claimed art of manipulating aspects of reality either by supernatural means or through knowledge of occult laws unknown to science. It is in contrast to science, in that science does not accept anything not subject to either direct or indirect observation, and subject to logical...
or enchantments
Incantation
An incantation or enchantment is a charm or spell created using words. An incantation may take place during a ritual, either a hymn or prayer, and may invoke or praise a deity. In magic, occultism, witchcraft it may be used with the intention of casting a spell on an object or a person...
. However, only a small number of the stories refer to fairies. The stories may nonetheless be distinguished from other folk narratives such as legend
Legend
A legend is a narrative of human actions that are perceived both by teller and listeners to take place within human history and to possess certain qualities that give the tale verisimilitude...
s (which generally involve belief in the veracity of the events described) and explicitly moral tales, including beast fables.

In less technical contexts, the term is also used to describe something blessed with unusual happiness, as in "fairy tale ending" (a happy ending
Happy ending
A happy ending is an ending of the plot of a work of fiction in which almost everything turns out for the best for the protagonists, their sidekicks, and almost everyone except the villains....
) or "fairy tale romance" (though not all fairy tales end happily).

The influence giovanni boccaccio,geoffrey chaucer,charles perrault and the grimm brother had on the fairytale

What is the third event of the psyche and cupid story?
More
x