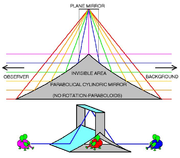 Invisibility is the state of an object that cannot be seen
Visual perception
Visual perception is the ability to interpret information and surroundings from the effects of visible light reaching the eye. The resulting perception is also known as eyesight, sight, or vision...
. An object in this state is said to be invisible (literally, "not visible"). The term is usually used as a fantasy
Fantasy
Fantasy is a genre of fiction that commonly uses magic and other supernatural phenomena as a primary element of plot, theme, or setting. Many works within the genre take place in imaginary worlds where magic is common...
/science fiction
Science fiction
Science fiction is a genre of fiction dealing with imaginary but more or less plausible content such as future settings, futuristic science and technology, space travel, aliens, and paranormal abilities...
term, where objects are literally made unseeable by magical
Magic (paranormal)
Magic is the claimed art of manipulating aspects of reality either by supernatural means or through knowledge of occult laws unknown to science. It is in contrast to science, in that science does not accept anything not subject to either direct or indirect observation, and subject to logical...
or technological
Technology
Technology is the making, usage, and knowledge of tools, machines, techniques, crafts, systems or methods of organization in order to solve a problem or perform a specific function. It can also refer to the collection of such tools, machinery, and procedures. The word technology comes ;...
means; however, its effects can also be seen in the real world, particularly in physics
Physics
Physics is a natural science that involves the study of matter and its motion through spacetime, along with related concepts such as energy and force. More broadly, it is the general analysis of nature, conducted in order to understand how the universe behaves.Physics is one of the oldest academic...
and perceptional psychology
Psychology
Psychology is the study of the mind and behavior. Its immediate goal is to understand individuals and groups by both establishing general principles and researching specific cases. For many, the ultimate goal of psychology is to benefit society...
.

Since objects can be seen by light in the visible spectrum
Visible spectrum
The visible spectrum is the portion of the electromagnetic spectrum that is visible to the human eye. Electromagnetic radiation in this range of wavelengths is called visible light or simply light. A typical human eye will respond to wavelengths from about 390 to 750 nm. In terms of...
from a source reflecting off their surfaces and hitting the viewer's eye
Human eye
The human eye is an organ which reacts to light for several purposes. As a conscious sense organ, the eye allows vision. Rod and cone cells in the retina allow conscious light perception and vision including color differentiation and the perception of depth...
, the most natural form of invisibility (whether real or fictional) is an object that neither reflects nor absorbs light (that is, it allows light to pass through it). In nature, this is known as
transparency, and is seen in many naturally occurring materials (although no naturally occurring material is 100% transparent).

Visibility also depends on the eye
Human eye
The human eye is an organ which reacts to light for several purposes. As a conscious sense organ, the eye allows vision. Rod and cone cells in the retina allow conscious light perception and vision including color differentiation and the perception of depth...
s of the observer and/or the instruments used. Thus an object can be classified as "invisible to" a person, animal, instrument, etc. In the research of sensorial perception
Perception
Perception is the process of attaining awareness or understanding of the environment by organizing and interpreting sensory information. All perception involves signals in the nervous system, which in turn result from physical stimulation of the sense organs...
invisibility has been shown to happen in cycles.

Technology can be used theoretically or practically to render real-world objects invisible:

A person can be described as invisible if others refuse to see them, or overlook them. The term was used in this manner in the title of the book Invisible Man
Invisible Man
Invisible Man is a novel written by Ralph Ellison, and the only one that he published during his lifetime . It won him the National Book Award in 1953...
, by Ralph Ellison
Ralph Ellison
Ralph Waldo Ellison was an American novelist, literary critic, scholar and writer. He was born in Oklahoma City, Oklahoma. Ellison is best known for his novel Invisible Man, which won the National Book Award in 1953...
, in reference to the protagonist, likely modeled after himself, being overlooked on account of his status as an African American
African American
African Americans are citizens or residents of the United States who have at least partial ancestry from any of the native populations of Sub-Saharan Africa and are the direct descendants of enslaved Africans within the boundaries of the present United States...
.

Practitioners of magic
Magic (paranormal)
Magic is the claimed art of manipulating aspects of reality either by supernatural means or through knowledge of occult laws unknown to science. It is in contrast to science, in that science does not accept anything not subject to either direct or indirect observation, and subject to logical...
, usually those practicing Black magic
Black magic
Black magic is the type of magic that draws on assumed malevolent powers or is used with the intention to kill, steal, injure, cause misfortune or destruction, or for personal gain without regard to harmful consequences. As a term, "black magic" is normally used by those that do not approve of its...
have claimed to have created spells or rituals to render themselves invisible. 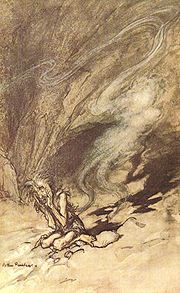 In fiction, people or objects can be rendered completely invisible by several means:

In some works, magical invisibility is "psychic" invisibility; while the character could be normally seen by anyone who notices him, the magic distracts anyone who actually could notice him. Such invisibility can be betrayed by mirrors or other reflective surfaces.

Where magical
Magic (paranormal)
Magic is the claimed art of manipulating aspects of reality either by supernatural means or through knowledge of occult laws unknown to science. It is in contrast to science, in that science does not accept anything not subject to either direct or indirect observation, and subject to logical...
invisibility is concerned, the issue may arise of whether the clothing
Clothing
Clothing refers to any covering for the human body that is worn. The wearing of clothing is exclusively a human characteristic and is a feature of nearly all human societies...
and items carried by the invisible wearer/carrier are also rendered invisible. In general, they are, but in some instances, clothing remains visible and must be removed for the full invisibility effect.

One of the few fictional examples of a double-blind cloak comes from the Thrawn Trilogy of Star Wars novels. Grand Admiral Thrawn
Grand Admiral Thrawn
Grand Admiral Thrawn is a fictional character and major antagonist from the Star Wars galaxy. He first appeared in Timothy Zahn's Thrawn trilogy, published between 1992 and 1994...
's cloaking devices make the ships wielding them invisible, but also prevent those inside the ship from seeing out. Thus, most of the time, ships using this type of cloak remain stationary, dropping the cloak just before battle. (See the beginning of Specter of the Past
Specter of the Past
Specter of the Past is the first of the two Hand of Thrawn novels by Timothy Zahn. Chronologically, it is the fourth in the Thrawn series.-Setting:...
for an example of this tactic.) An earlier example can be found in the Traveller
Traveller (role-playing game)
Traveller is a series of related science fiction role-playing games, the first published in 1977 by Game Designers' Workshop and subsequent editions by various companies remaining in print to this day. The game was inspired from such classic science fiction stories as the Dumarest saga series by...
role-playing game, in which starships equipped with black globe generators are afforded resistance to physical detection and attack at the cost of being blind. The generators are set to 'flicker' at a pre-set frequency, permitting the ship's sensors to penetrate the globe but at the cost of momentary vulnerability.

In the Halo
Halo (series)
Halo is a multi-million dollar science fiction video game franchise created by Bungie and now managed by 343 Industries and owned by Microsoft Studios. The series centers on an interstellar war between humanity and a theocratic alliance of aliens known as the Covenant...
video game series, the "active camouflage" power-up
Power-up
In computer and video games, power-ups are objects that instantly benefit or add extra abilities to the game character as a game mechanic. This is in contrast to an item, which may or may not have a benefit and can be used at a time chosen by the player...
renders the wearer only partially invisible — the visible silhouette of the wearer is likely necessary so that the wearer's retinas can absorb what little light they need to see (though it also exists for game balance reasons). In the video game Quake, picking up a magic ring turns the player invisible to monsters for thirty seconds. In multiplayer deathmatch
Deathmatch (gaming)
Deathmatch or Player vs All is a widely-used gameplay mode integrated into many shooter and real-time strategy computer games...
mode, only the player's eyes are visible, giving his opponents only a small clue to his location. With eyes being visible, light can be absorbed and the player can see.

In the Predator
Predator (franchise)
The Predator film series is a science fiction horror film franchise. Produced by 20th Century Fox, the series started in 1987 with the film Predator, which led to two sequels and novel, comic book and video game spin-offs....
series, the Predator
Predator (alien)
The Predator is a fictional extraterrestrial species featured in the Predator science-fiction franchise, characterised by its trophy hunting of other dangerous species for sport, including humans and its fictional counterparts, Aliens....
's cloaking device is similar to the active camouflage featured in Halo. The Predator can still "just" be seen by the careful observer. Whether this is to allow some of the EM spectrum to reach the Predator's eyes is debatable as the Predator sees in infrared. In fact theoretically the cloaking system could be manufactured to completely bend all visible light around it leaving him 100% invisible to species that only perceive visible light. However, this also may be the result of the species keeping a fair advantage, as Predators are known to be honorable warriors.

In The Invisible Man
The Invisible Man (2000 TV series)
The Invisible Man is a Sci-Fi American television series starring Vincent Ventresca, Paul Ben-Victor, Eddie Jones, Shannon Kenny and Michael McCafferty...
, the main character of Darien Fawkes turns invisible thanks to a chemical called quicksilver that causes him to reflect light in a frequency that the human visual cortex cannot process. On some occasions, Darien has been able to see in this spectrum by turning his eyes invisible, allowing him to see other invisible people; when he was once blinded, he was able to use this ability to allow himself to see while his eyes healed to serve as a substitute visual cortex.