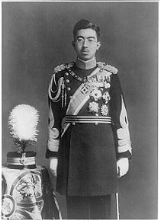 Overview
çiɽoꜜçito, posthumously in Japan officially called Emperor Shōwa or , (April 29, 1901 – January 7, 1989) was the 124th Emperor of Japan
Emperor of Japan
The Emperor of Japan is, according to the 1947 Constitution of Japan, "the symbol of the state and of the unity of the people." He is a ceremonial figurehead under a form of constitutional monarchy and is head of the Japanese Imperial Family with functions as head of state. He is also the highest...
according to the traditional order, reigning from December 25, 1926, until his death in 1989. Although better known outside of Japan by his personal name Hirohito, in Japan he is now referred to exclusively by his posthumous name
Posthumous name
A posthumous name is an honorary name given to royalty, nobles, and sometimes others, in East Asia after the person's death, and is used almost exclusively instead of one's personal name or other official titles during his life...
Emperor Shōwa. The word Shōwa is the name of the era
Showa period
The , or Shōwa era, is the period of Japanese history corresponding to the reign of the Shōwa Emperor, Hirohito, from December 25, 1926 through January 7, 1989.The Shōwa period was longer than the reign of any previous Japanese emperor...
that corresponded with the Emperor's reign, and was made the Emperor's own name upon his death.

At the start of his reign, Japan was already one of the great powers – the ninth largest economy in the world after Italy, the third largest naval country
Washington Naval Treaty
The Washington Naval Treaty, also known as the Five-Power Treaty, was an attempt to cap and limit, and "prevent 'further' costly escalation" of the naval arms race that had begun after World War I between various International powers, each of which had significant naval fleets. The treaty was...
, and one of the five permanent members of the council of the League of Nations
League of Nations
The League of Nations was an intergovernmental organization founded as a result of the Paris Peace Conference that ended the First World War. It was the first permanent international organization whose principal mission was to maintain world peace...
.

After pondering deeply the general trends of the world and the actual conditions obtaining in Our Empire today, We have decided to effect a settlement of the present situation by resorting to an extraordinary measure. We have ordered Our Government to communicate to the Governments of the United States, Great Britain, China and the Soviet Union that Our Empire accepts the provisions of their Joint Declaration.

To strive for the common prosperity and happiness of all nations as well as the security and well-being of Our subjects is the solemn obligation which has been handed down by Our Imperial Ancestors and which lies close to Our heart.

The hardships and sufferings to which Our nation is to be subjected hereafter will be certainly great. We are keenly aware of the inmost feelings of all of you. Our subjects. However, it is according to the dictates of time and fate that We have resolved to pave the way for a grand peace for all the generations to come by enduring the unendurable and suffering what is unsufferable.

Beware most strictly of any outbursts of emotion which may engender needless complications, or any fraternal contention and strike which may create confusion, lead you astray and cause you to lose the confidence of the world. Let the entire nation continue as one family from generation to generation, ever firm in its faith in the imperishability of its sacred land, and mindful of its heavy burden of responsibility and of the long road before it.

Unite your total strength, to be devoted to construction for the future. Cultivate the ways of rectitude, foster nobility of spirit, and work with resolution — so that you may enhance the innate glory of the Imperial State and keep pace with the progress of the world.