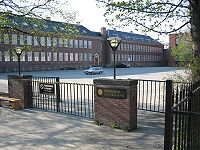 During and after the mission of St Augustine
Augustine of Canterbury
Augustine of Canterbury was a Benedictine monk who became the first Archbishop of Canterbury in the year 597...
to the Southern British, Cathedral schools were established as the new dioceses were themselves created (Canterbury 597, Rochester 604, York
St Peter's School, York
St Peter's School is a co-educational independent boarding and day school located in the English City of York, with extensive grounds on the banks of the River Ouse...
627 for example). This group of schools forms the oldest schools continuously operating. A significant function of Cathedral schools was to provide boy
Choirboy
A choirboy is a boy member of a choir, also known as a treble.As a derisive slang term, it refers to a do-gooder or someone who is morally upright, in the same sense that "Boy Scout" refers to someone who is considered honorable or conscientious.- History :The use of choirboys in Christian...
trebles for the choirs, evolving into choir schools, some of which still function as such.

Charlemagne
Charlemagne
Charlemagne was King of the Franks from 768 and Emperor of the Romans from 800 to his death in 814. He expanded the Frankish kingdom into an empire that incorporated much of Western and Central Europe. During his reign, he conquered Italy and was crowned by Pope Leo III on 25 December 800...
, king of the Franks and later Emperor, recognizing the importance of education to the clergy and, to a lesser extent, to the nobility, set out to restore this declining tradition by issuing several decrees requiring that education be provided at monasteries and cathedrals. In 789, Charlemagne's Admonitio Generalis
Admonitio Generalis
The Admonitio Generalis, as it is commonly known, was an important piece of Carolingian legislation, promulgated in 789 by the Emperor Charlemagne...
required that schools be established in every monastery and bishopric, in which "children can learn to read; that psalms, notation, chant, computation, and grammar be taught." Subsequent documents, such as the letter De litteris colendis
De litteris colendis
The Epistola de litteris colendis is a well-known letter addressed by Charlemagne to Abbot Baugulf of Fulda sometime between 794 and 797 regarding language.-See also:*Admonitio Generalis*Carolingian dynasty*Carolingian Empire*Carolingian Renaissance...
, required that bishops select as teachers men who had "the will and the ability to learn and a desire to instruct others" and a decree of the Council of Frankfurt
Council of Frankfurt
The Council of Frankfurt in 794 was called by Charlemagne. This church council condemned the Adoptionist heresy and revoked decrees regarding the holy icons which were established in 787 at the Second Council of Nicaea...
(794) recommended that bishops undertake the instruction of their clergy.

Subsequently, cathedral schools arose in some major cities including Chartres, Orleans, Paris, Laon, Liege, Rheims, Rouen and Utrecht. Following in the earlier tradition, these cathedral schools primarily taught future clergy and provided literate administrators for the increasingly elaborate courts of the Renaissance of the 12th century
Renaissance of the 12th century
The Renaissance of the 12th century was a period of many changes at the outset of the High Middle Ages. It included social, political and economic transformations, and an intellectual revitalization of Western Europe with strong philosophical and scientific roots...
. The court of Henry I of England
Henry I of England
Henry I was the fourth son of William I of England. He succeeded his elder brother William II as King of England in 1100 and defeated his eldest brother, Robert Curthose, to become Duke of Normandy in 1106...
, himself an early example of a literate king, was closely tied to the cathedral school of Laon.

Cathedral schools were mostly oriented around the academic welfare of the nobility's children. Because it was intended to train them for careers in the church, girls were excluded from the schools. Later on, many lay students who weren't necessarily interested in seeking a career in the church wanted to enroll. Demand arose for schools to teach government, state and other Church affairs. The schools, (some notable ones dating back to the eighth and ninth centuries) accepted fewer than 100 students. Pupils had to demonstrate substantial intelligence and be able to handle a demanding academic course load. Considering that books were also expensive, students were in the practice of memorizing their teachers' lectures. Cathedral schools at this time were primarily run by a group of ministers and divided into two parts: Schola minor which was intended for younger students would later become elementary school
Elementary school
An elementary school or primary school is an institution where children receive the first stage of compulsory education known as elementary or primary education. Elementary school is the preferred term in some countries, particularly those in North America, where the terms grade school and grammar...
s. Then there was the schola major, which taught older students. These would later become secondary school
Secondary school
Secondary school is a term used to describe an educational institution where the final stage of schooling, known as secondary education and usually compulsory up to a specified age, takes place...
s.

The subjects taught at Cathedral schools ranged from literature to mathematics. These topics were called the seven liberal arts: grammar
Grammar
In linguistics, grammar is the set of structural rules that govern the composition of clauses, phrases, and words in any given natural language. The term refers also to the study of such rules, and this field includes morphology, syntax, and phonology, often complemented by phonetics, semantics,...
, astronomy
Astronomy
Astronomy is a natural science that deals with the study of celestial objects and phenomena that originate outside the atmosphere of Earth...
, rhetoric
Rhetoric
Rhetoric is the art of discourse, an art that aims to improve the facility of speakers or writers who attempt to inform, persuade, or motivate particular audiences in specific situations. As a subject of formal study and a productive civic practice, rhetoric has played a central role in the Western...
(or speech), logic
Logic
In philosophy, Logic is the formal systematic study of the principles of valid inference and correct reasoning. Logic is used in most intellectual activities, but is studied primarily in the disciplines of philosophy, mathematics, semantics, and computer science...
, arithmetic
Arithmetic
Arithmetic or arithmetics is the oldest and most elementary branch of mathematics, used by almost everyone, for tasks ranging from simple day-to-day counting to advanced science and business calculations. It involves the study of quantity, especially as the result of combining numbers...
, geometry
Geometry
Geometry arose as the field of knowledge dealing with spatial relationships. Geometry was one of the two fields of pre-modern mathematics, the other being the study of numbers ....
and music
Music
Music is an art form whose medium is sound and silence. Its common elements are pitch , rhythm , dynamics, and the sonic qualities of timbre and texture...
. In grammar classes, students were trained to read, write and speak Latin
Latin
Latin is an Italic language originally spoken in Latium and Ancient Rome. It, along with most European languages, is a descendant of the ancient Proto-Indo-European language. Although it is considered a dead language, a number of scholars and members of the Christian clergy speak it fluently, and...
which was the universal language in Europe at the time. Astronomy was necessary for calculating dates and times. Rhetoric was a major component of a vocal education. Logic consisted of discovering the art of solving mathematical problems, and arithmetic served as the basis for quantitative reasoning. Students read stories and poems in Latin by authors such as Cicero and Virgil. Much as in the present day, cathedral schools were split into elementary and higher schools with different curricula. The elementary school curriculum was composed of reading, writing and psalmody, while the high school curriculum was trivium (grammar, rhetoric and dialect), the rest of the liberal arts, as well as scripture study and pastoral theology
Pastoral theology
Pastoral theology is the branch of practical theology concerned with the application of the study of religion in the context of regular church ministry. This approach to theology seeks to give practical expression to theology...
.