Encyclopedia
Roskilde (ˈʁʌskilə) is the main city in Roskilde Municipality
Roskilde municipality
Roskilde municipality is a municipality in Region Sjælland, 30 km west of Copenhagen on the island of Zealand in east Denmark....
, Denmark
Denmark
Denmark is a Scandinavian country in Northern Europe. The countries of Denmark and Greenland, as well as the Faroe Islands, constitute the Kingdom of Denmark . It is the southernmost of the Nordic countries, southwest of Sweden and south of Norway, and bordered to the south by Germany. Denmark...
on the island of Zealand. It is an ancient city
City
A city is a relatively large and permanent settlement. Although there is no agreement on how a city is distinguished from a town within general English language meanings, many cities have a particular administrative, legal, or historical status based on local law.For example, in the U.S...
, dating from the Viking Age
Viking Age
Viking Age is the term for the period in European history, especially Northern European and Scandinavian history, spanning the late 8th to 11th centuries. Scandinavian Vikings explored Europe by its oceans and rivers through trade and warfare. The Vikings also reached Iceland, Greenland,...
and is a member of the Most Ancient European Towns Network
Most Ancient European Towns Network
The Most Ancient European Towns Network is a working group of the oldest cities in Europe. It was founded in 1994, with the idea coming from the town of Argos, Greece presented to the European Union...
.

Roskilde has a pedestrian street running down the center of the city, with many shops, restaurants, and cafes. Several tourist attractions draw visitors from around Denmark and the world. The local university has an education program that invites international students to attend for a year.

According to Adam of Bremen
Adam of Bremen
Adam of Bremen was a German medieval chronicler. He lived and worked in the second half of the eleventh century. He is most famous for his chronicle Gesta Hammaburgensis Ecclesiae Pontificum .-Background:Little is known of his life other than hints from his own chronicles...
and Saxo Grammaticus
Saxo Grammaticus
Saxo Grammaticus also known as Saxo cognomine Longus was a Danish historian, thought to have been a secular clerk or secretary to Absalon, Archbishop of Lund, foremost advisor to Valdemar I of Denmark. He is the author of the first full history of Denmark.- Life :The Jutland Chronicle gives...
, in the 980s, Harald I of Denmark
Harald I of Denmark
Harald "Bluetooth" Gormsson was the son of King Gorm the Old and of Thyra Dannebod. He died in 985 or 986 having ruled as King of Denmark from around 958 and King of Norway for a few years probably around 970...
built a church and a royal estate in Roskilde. Saxo Grammaticus associates the name Roskilde with the legendary King Roar
Hroðgar
Hroðgar, King Hroþgar, "Hrothgar", Hróarr, Hroar, Roar, Roas or Ro was a legendary Danish king, living in the early 6th century....
who possibly lived there in the 6th century. Harald was buried at the church which is on the same site as today's Roskilde Cathedral
Roskilde Cathedral
Roskilde Cathedral , in the city of Roskilde on the island of Zealand in eastern Denmark, is a cathedral of the Lutheran Church of Denmark. The first Gothic cathedral to be built of brick, it encouraged the spread of the Brick Gothic style throughout Northern Europe...
.

In 1020, Roskilde became a bishopric
Roskilde (titular see)
Roskilde is a Catholic titular see. The former see, suppressed in the sixteenth century, was Roskilde in Denmark....
, making it the church's most important town in Denmark. Absalon
Absalon
Absalon was a Danish archbishop and statesman, who was the Bishop of Roskilde from 1158 to 1192 and Archbishop of Lund from 1178 until his death. He was the foremost politician and churchfather of Denmark in the second half of the 12th century, and was the closest advisor of King Valdemar I of...
, the Danish bishop, had a brick church built there in 1170 which later became the cathedral. In the following years, under Absalon's influence, many other churches were built in the town.

Roskilde was given the status of a market town in 1268. It was probably the largest and most important town in Denmark at the time. With the support of the Roman Catholic Church, it continued to thrive until 1443. But as a result of the Reformation
Reformation in Denmark
The Reformation in Denmark–Norway and Holstein was the transition from Roman Catholicism to Lutheranism in the realms ruled by the Copenhagen-based House of Oldenburg in the first half of the sixteenth century...
and the closure of the Roman Catholic Church in Denmark it lost its earlier status. Roskilde Cathedral did, however, continue to be the place where the kings and queens of Denmark were buried.

The town suffered from plague, wars with the Swedes and a number of devastating fires in the 17th century but began to recover in the 18th century with the opening of the railway from Copenhagen in 1847. More recently, with the establishment of the Viking Ship Museum in 1969, Roskilde has been recognised as a cultural and educational centre in Denmark with the first Roskilde Festival
Roskilde Festival
Roskilde Festival is a festival held south of Roskilde in Denmark and is one of the six biggest annual music festivals in Europe . It was created in 1971 by two high school students, Mogens Sandfær and Jesper Switzer Møller, and promoter Carl Fischer...
in 1971 and the university which opened 1972. 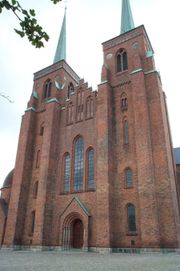 The city's early importance is evident from the fact that the Roskilde Cathedral
Roskilde Cathedral
Roskilde Cathedral , in the city of Roskilde on the island of Zealand in eastern Denmark, is a cathedral of the Lutheran Church of Denmark. The first Gothic cathedral to be built of brick, it encouraged the spread of the Brick Gothic style throughout Northern Europe...
was the only cathedral in Zealand until the 20th century. Built in the 12th and 13th centuries, it was the first Gothic
Gothic architecture
Gothic architecture is a style of architecture that flourished during the high and late medieval period. It evolved from Romanesque architecture and was succeeded by Renaissance architecture....
cathedral to be built of brick and its construction encouraged the spread of this style throughout northern Europe
Europe
Europe is, by convention, one of the world's seven continents. Comprising the westernmost peninsula of Eurasia, Europe is generally 'divided' from Asia to its east by the watershed divides of the Ural and Caucasus Mountains, the Ural River, the Caspian and Black Seas, and the waterways connecting...
. The cathedral is the burial site for Danish monarchs and is a major tourist attraction with more than 125,000 visitors annually. Since 1995, the cathedral has been listed as a UNESCO World Heritage Site
World Heritage Site
A UNESCO World Heritage Site is a place that is listed by the UNESCO as of special cultural or physical significance...
. A working church, it also hosts concerts throughout the year. 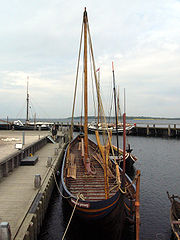 Another attraction in the city is the Viking Ship Museum
Viking Ship Museum in Roskilde
The Viking Ship Museum in Roskilde is the Danish national museum for ships, seafaring and boatbuilding in the prehistoric and medieval period....
(Vikingeskibsmuseet). The centrepieces of its collection are the well-preserved remains of five Viking ships
Skuldelev ships
The Skuldelev ships is a term used for 5 Viking ships recovered from Peberrenden by Skuldelev, c. 20 km north of Roskilde in Denmark. In 1962, the remains of the ships were excavated over 4 months . The recovered pieces constitute 5 types of ships and have been dated to the 11th century...
, excavated from nearby Roskilde Fjord
Roskilde Fjord
Roskilde Fjord is the fjord north of Roskilde, Denmark, and is located at . It is a long branch of the Isefjord.-Cities:The cities Frederiksværk, Frederikssund, Jægerspris, Jyllinge and Roskilde, , all have coastline at Roskilde Fjord...
in the late 1960s. The ships were scuttled there in the 11th century to block a navigation channel, thus protecting the city, then the Danish capital, from seaborne assault. The museum also undertakes research in experimental archaeology
Experimental archaeology
Experimental archaeology employs a number of different methods, techniques, analyses, and approaches in order to generate and test hypotheses, based upon archaeological source material, like ancient structures or artifacts. It should not be confused with primitive technology which is not concerned...
centered on Viking shipbuilding and seaworthiness. These five ships represents several distinct classes of Viking Ships, such as the Longship, and Warship, and smaller fishing and ferry boats. The ships on display range from 10 feet (3 m) to 50 feet (15 m). 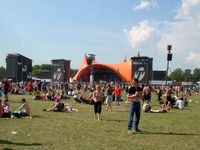 Since 1971, the Roskilde Festival
Roskilde Festival
Roskilde Festival is a festival held south of Roskilde in Denmark and is one of the six biggest annual music festivals in Europe . It was created in 1971 by two high school students, Mogens Sandfær and Jesper Switzer Møller, and promoter Carl Fischer...
, a rock music
Rock and roll
Rock and roll is a genre of popular music that originated and evolved in the United States during the late 1940s and early 1950s, primarily from a combination of African American blues, country, jazz, and gospel music...
festival, has been held annually on the fairgrounds near Roskilde. It has grown to become one of the biggest music festivals in Europe
Europe
Europe is, by convention, one of the world's seven continents. Comprising the westernmost peninsula of Eurasia, Europe is generally 'divided' from Asia to its east by the watershed divides of the Ural and Caucasus Mountains, the Ural River, the Caspian and Black Seas, and the waterways connecting...
, with a diverse selection of music, including rock, metal, hip-hop, electronica, dance, and world music. All profits from this festival are donated to charities. The fairgrounds are also the site of regionally popular agricultural and animal exhibitions, and large flea markets.

Roskilde has a four-platform railway station. Its seven tracks serve as a central hub connecting southern Zealand, the islands of Falster and Lolland, west Zealand and Jutland to Copenhagen.

It is the oldest railway station in Denmark still operating and the first built of stone. The first train arrived from Copenhagen on 26 June 1847.

Opened on 1 April 1973, Roskilde's small airport
Roskilde Airport
Roskilde Airport , officially known as Copenhagen Airport, Roskilde , is located 4 nautical miles southeast of Roskilde near the town Tune. It was opened in 1973 as the first of three planned relief airports around Copenhagen. These plans were shelved shortly after, and the two other relief...
, serves light aircraft for training, taxi, and flight instruction. There are existing plans to expand the airport for use by larger aircraft, possibly including discount international flights. The plans are pending an environmental impact assessment. The airport currently handles up to 100,000 operations (flights) per year.