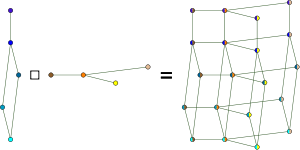 In graph theory
Graph theory
In mathematics and computer science, graph theory is the study of graphs, mathematical structures used to model pairwise relations between objects from a certain collection. A "graph" in this context refers to a collection of vertices or 'nodes' and a collection of edges that connect pairs of...
, the Cartesian product G

H of graphs G and H is a graph such that

Cartesian product graphs can be recognized efficiently, in time O(m log n) for a graph with m edges and n vertices . The operation is commutative as an operation on isomorphism
Graph isomorphism
In graph theory, an isomorphism of graphs G and H is a bijection between the vertex sets of G and H f \colon V \to V \,\!such that any two vertices u and v of G are adjacent in G if and only if ƒ and ƒ are adjacent in H...
classes of graphs, and more strongly the graphs G

G are naturally isomorphic, but it is not commutative as an operation on labeled graphs. The operation is also associative, as the graphs (F

Thus, the Cartesian product of two hypercube graphs is another hypercube: Qi

If a connected graph is a Cartesian product, it can be factorized uniquely as a product of prime factors, graphs that cannot themselves be decomposed as products of graphs (Sabidussi 1960; Vizing 1963). However, Imrich and Klavžar (2000) describe a disconnected graph that can be expressed in two different ways as a Cartesian product of prime graphs:

(K1 + K2),
where the plus sign denotes disjoint union and the superscripts denote exponentiation over Cartesian products.

A Cartesian product is vertex transitive
Vertex-transitive graph
In the mathematical field of graph theory, a vertex-transitive graph is a graph G such that, given any two vertices v1 and v2 of G, there is some automorphismf:V \rightarrow V\ such thatf = v_2.\...
if and only if each of its factors is (Imrich and Klavžar, Theorem 4.19).

A Cartesian product is bipartite
Bipartite graph
In the mathematical field of graph theory, a bipartite graph is a graph whose vertices can be divided into two disjoint sets U and V such that every edge connects a vertex in U to one in V; that is, U and V are independent sets...
if and only if each of its factors is. More generally, the chromatic number of the Cartesian product satisfies the equation

According to Klavžar and Imrich, Cartesian products of graphs were defined in 1912 by Whitehead
Alfred North Whitehead
Alfred North Whitehead, OM FRS was an English mathematician who became a philosopher. He wrote on algebra, logic, foundations of mathematics, philosophy of science, physics, metaphysics, and education...
and Russell
Bertrand Russell
Bertrand Arthur William Russell, 3rd Earl Russell, OM, FRS was a British philosopher, logician, mathematician, historian, and social critic. At various points in his life he considered himself a liberal, a socialist, and a pacifist, but he also admitted that he had never been any of these things...
. They were repeatedly rediscovered later, notably by Sabidussi in 1960.
The source of this article is wikipedia, the free encyclopedia.  The text of this article is licensed under the GFDL.