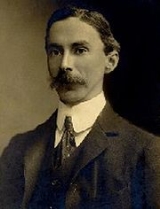 Overview
Bertrand Arthur William Russell, 3rd Earl Russell, OM, FRS (18 May 1872 – 2 February 1970) was a British philosopher, logician
Mathematical logic
Mathematical logic is a subfield of mathematics with close connections to foundations of mathematics, theoretical computer science and philosophical logic. The field includes both the mathematical study of logic and the applications of formal logic to other areas of mathematics...
, mathematician
Mathematician
A mathematician is a person whose primary area of study is the field of mathematics. Mathematicians are concerned with quantity, structure, space, and change....
, historian
Historian
A historian is a person who studies and writes about the past and is regarded as an authority on it. Historians are concerned with the continuous, methodical narrative and research of past events as relating to the human race; as well as the study of all history in time. If the individual is...
, and social critic. At various points in his life he considered himself a liberal
Liberalism
Liberalism is the belief in the importance of liberty and equal rights. Liberals espouse a wide array of views depending on their understanding of these principles, but generally, liberals support ideas such as constitutionalism, liberal democracy, free and fair elections, human rights,...
, a socialist, and a pacifist, but he also admitted that he had never been any of these things in any profound sense. He was born in Monmouthshire, into one of the most prominent aristocratic families in Britain.

Russell led the British "revolt against idealism
Idealism
In philosophy, idealism is the family of views which assert that reality, or reality as we can know it, is fundamentally mental, mentally constructed, or otherwise immaterial. Epistemologically, idealism manifests as a skepticism about the possibility of knowing any mind-independent thing...
" in the early 1900s.

What are the major drawbacks of bertrand russell's theory of descriptions?
More

Bertrand russell says that love and knowledge led upward toward the heavens.what does he mean?

Bertand Russell says,"...our attitude towards those outside the herd,...are as ferocious as those of any animal..." Explain this with reference to any...

Bertand Russell traces the origin and growth of modern scintific thinking to the Babilonians and especially the Greeks. A section of the Indian intell...

How does Bertand Russell make this essay on ideas and growth of scientific temper interesting in his work 'Ideas That Have Helped Mankind'?

What ideass does Bertand Russell say have helped mankind in his work 'Ideas That Have Helped Mankind'?

How has Bertand Russell show the difference between animals and evolved humans in his work 'Ideas That Have Helped Mankind'?
More

In the revolt against idealism, the ambiguities of the word “experience” have been perceived, with the result that realists have more and more avoided the word. It is to be feared, however, that if the word is avoided the confusions of thought with which it has been associated may persist.

On the Nature of Acquaintance: Neutral Monism (1914)

Every philosophical problem, when it is subjected to the necessary analysis and justification, is found either to be not really philosophical at all, or else to be, in the sense in which we are using the word, logical.