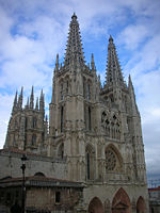 Encyclopedia
The Burgos Cathedral is a Gothic-style Roman Catholic cathedral in Burgos
Burgos
Burgos is a city of northern Spain, historic capital of Castile. It is situated at the edge of the central plateau, with about 178,966 inhabitants in the city proper and another 20,000 in its suburbs. It is the capital of the province of Burgos, in the autonomous community of Castile and León...
, Spain
Spain
Spain , officially the Kingdom of Spain languages]] under the European Charter for Regional or Minority Languages. In each of these, Spain's official name is as follows:;;;;;;), is a country and member state of the European Union located in southwestern Europe on the Iberian Peninsula...
. It is dedicated to the Virgin Mary
Mary (mother of Jesus)
Mary , commonly referred to as "Saint Mary", "Mother Mary", the "Virgin Mary", the "Blessed Virgin Mary", or "Mary, Mother of God", was a Jewish woman of Nazareth in Galilee...
and is famous for its vast size and unique architecture. Its construction began in 1221, and was in use nine years later, although work continued on and off for two hundred years. It was primarily influenced by the French Gothic
Gothic architecture
Gothic architecture is a style of architecture that flourished during the high and late medieval period. It evolved from Romanesque architecture and was succeeded by Renaissance architecture....
style.

It had very important modifications in the 15th and 16th centuries (spires of the principal façade, Chapel of the Constable, cimborio of the transept: these elements of advanced Gothic give the cathedral its distinguished profile). The last works of importance (the sacristy or the Chapel of Saint Thecla
Thecla
Thecla was a saint of the early Christian Church, and a reported follower of Paul the Apostle. The only known record of her comes from the apocryphal Acts of Paul and Thecla, probably composed in the 2nd century.-Biography:...
) occurred during the 18th century, the century in which the Gothic statuary of the doors of the principal façade was also transformed.

In the cathedral, works of extraordinary artists are kept, such as the architects and sculptors of the Colonia family (Juan
Juan de Colonia
Juan de Colonia or Johannes von Köln was a gothic architect who introduced the flamboyant style to Castile....
, Simón
Simón de Colonia
Simón de Colonia was a Spanish architect and sculptor, son of architect Juan de Colonia and father of architect and sculptor Francisco de Colonia....
and Francisco), the sculptors Gil de Siloé, Felipe Vigarny or Juan de Anchieta
Juan de Anchieta
Juan de Anchieta was a leading Spanish Basque composer of the Renaissance, at the Royal Court Chaplaincy in Granada of Queen Isabel I of Castile.-History:...
, the sculptor and architect Diego de Siloé
Diego Siloe
Diego Siloe or Diego de Siloé was a Spanish Renaissance architect and sculptor, progenitor of the Granadan school of sculpture. He developed the majority of his work in Andalusia.-Biography:...
, the grillworker Cristóbal de Andino or the painter Sebastiano del Piombo
Sebastiano del Piombo
Sebastiano del Piombo , byname of Sebastiano Luciani, was an Italian Renaissance-Mannerist painter of the early 16th century famous for his combination of the colors of the Venetian school and the monumental forms of the Roman school.- Biography :Sebastiano del Piombo belongs to the painting school...
("Holy Family On A Voyage"), among many others.

The cathedral was declared a World Heritage Site
World Heritage Site
A UNESCO World Heritage Site is a place that is listed by the UNESCO as of special cultural or physical significance...
by UNESCO
UNESCO
The United Nations Educational, Scientific and Cultural Organization is a specialized agency of the United Nations...
on October 31, 1984. It is the only Spanish cathedral that has this distinction independently, without being joined to the historic center of a city (as in Salamanca
Salamanca
Salamanca is a city in western Spain, in the community of Castile and León. Because it is known for its beautiful buildings and urban environment, the Old City was declared a UNESCO World Heritage Site in 1988. It is the most important university city in Spain and is known for its contributions to...
, Santiago de Compostela
Santiago de Compostela
Santiago de Compostela is the capital of the autonomous community of Galicia, Spain.The city's Cathedral is the destination today, as it has been throughout history, of the important 9th century medieval pilgrimage route, the Way of St. James...
, Ávila, Córdoba
Córdoba, Spain
-History:The first trace of human presence in the area are remains of a Neanderthal Man, dating to c. 32,000 BC. In the 8th century BC, during the ancient Tartessos period, a pre-urban settlement existed. The population gradually learned copper and silver metallurgy...
, Toledo
Toledo, Spain
Toledo's Alcázar became renowned in the 19th and 20th centuries as a military academy. At the outbreak of the Spanish Civil War in 1936 its garrison was famously besieged by Republican forces.-Economy:...
, Alcalá de Henares
Alcalá de Henares
Alcalá de Henares , meaning Citadel on the river Henares, is a Spanish city, whose historical centre is one of UNESCO's World Heritage Sites, and one of the first bishoprics founded in Spain...
or Cuenca
Cuenca, Spain
-History:When the Iberian peninsula was part of the Roman Empire there were several important settlements in the province, such as Segóbriga, Ercávica and Gran Valeria...
) or in union with others buildings, as in Seville
Seville
Seville is the artistic, historic, cultural, and financial capital of southern Spain. It is the capital of the autonomous community of Andalusia and of the province of Seville. It is situated on the plain of the River Guadalquivir, with an average elevation of above sea level...
.

The principal façade was inspired by the pure French Gothic style of the cathedrals of Paris
Paris
Paris is the capital and largest city in France, situated on the river Seine, in northern France, at the heart of the Île-de-France region...
and of Reims
Reims
Reims , a city in the Champagne-Ardenne region of France, lies east-northeast of Paris. Founded by the Gauls, it became a major city during the period of the Roman Empire....
. It consists of three bays topped by two lateral square towers. The steep spires of German influence were added in the 15th century and are the work of Juan de Colonia.

Some elements of great interest within of the cathedral are the 'Papamoscas' (Flycatcher), an articulated statue which opens its mouth upon the sounding of the bells every hour, the Romanesque sepulchre of Mudarra, the vengeful stepbrother of the death of the seven princes de Lara (brought to the cathedral from its original location in the Monastery of San Pedro de Arlanza due to its abandonment by alienation), the carved chairs of the choir, the sepulchre of the Bishop Mauricio, the tomb of El Cid
El Cid
Rodrigo Díaz de Vivar , known as El Cid Campeador , was a Castilian nobleman, military leader, and diplomat...
and his wife Doña Jimena, the letter of security of El Cid and his chest.

The construction of the cathedral was ordered by King Ferdinand III
Ferdinand III of Castile
Saint Ferdinand III, T.O.S.F., was the King of Castile from 1217 and León from 1230. He was the son of Alfonso IX of León and Berenguela of Castile. Through his second marriage he was also Count of Aumale. He finished the work done by his maternal grandfather Alfonso VIII and consolidated the...
of Castile
Kingdom of Castile
Kingdom of Castile was one of the medieval kingdoms of the Iberian Peninsula. It emerged as a political autonomous entity in the 9th century. It was called County of Castile and was held in vassalage from the Kingdom of León. Its name comes from the host of castles constructed in the region...
and Mauricio, the English
Kingdom of England
The Kingdom of England was, from 927 to 1707, a sovereign state to the northwest of continental Europe. At its height, the Kingdom of England spanned the southern two-thirds of the island of Great Britain and several smaller outlying islands; what today comprises the legal jurisdiction of England...
-born Bishop of Burgos. Construction started on the site of the former Romanesque
Romanesque architecture
Romanesque architecture is an architectural style of Medieval Europe characterised by semi-circular arches. There is no consensus for the beginning date of the Romanesque architecture, with proposals ranging from the 6th to the 10th century. It developed in the 12th century into the Gothic style,...
cathedral on July 20, 1221, beginning at the chevet, which was completed in nine years.

The high altar was first consecrated in 1260, then there was a lengthy hiatus of almost 200 years before construction was recommenced. The cathedral was completed in 1567, with the completion of the lantern spire over the main crossing
Crossing (architecture)
A crossing, in ecclesiastical architecture, is the junction of the four arms of a cruciform church.In a typically oriented church , the crossing gives access to the nave on the west, the transept arms on the north and south, and the choir on the east.The crossing is sometimes surmounted by a tower...
(which rises above a delicate openwork star vault).

The architects principally responsible for its construction were a Frenchman in the 13th century and a German in the 15th century. In 1417, the bishop of Burgos attended the Council of Constance
Council of Constance
The Council of Constance is the 15th ecumenical council recognized by the Roman Catholic Church, held from 1414 to 1418. The council ended the Three-Popes Controversy, by deposing or accepting the resignation of the remaining Papal claimants and electing Pope Martin V.The Council also condemned and...
and returned with the master builder John of Cologne
Juan de Colonia
Juan de Colonia or Johannes von Köln was a gothic architect who introduced the flamboyant style to Castile....
(Juan de Colonia), who completed the towers with spires of open stonework tracery.

The north transept
Transept
For the periodical go to The Transept.A transept is a transverse section, of any building, which lies across the main body of the building. In Christian churches, a transept is an area set crosswise to the nave in a cruciform building in Romanesque and Gothic Christian church architecture...
portal, known as the Portada de la Coronería, has statues of the Twelve Apostles. Above, ogival windows and two spires crown the portal. On the south portal, the portada depicts the evangelists at their writing desks.

The magnificent octagonal Chapel of the Condestable is of Flamboyant Gothic
Gothic architecture
Gothic architecture is a style of architecture that flourished during the high and late medieval period. It evolved from Romanesque architecture and was succeeded by Renaissance architecture....
style, filled with traceries, knights and angels and heraldry. It was destined for the graves of Pedro Fernández de Velasco, 2nd Count of Haro, Condestable of Castile
Constable of Castile
Constable of Castile was a title created by John I, King of Castile in 1382, to substitute the title Alférez Mayor del Reino. The constable was the second person in power in the kingdom, after the King, and his responsibility was to command the military in the absence of the ruler.In 1473 Henry IV...
and his family.