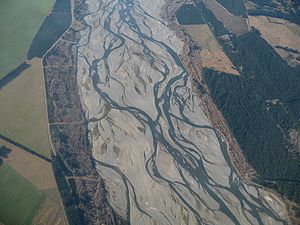 A braided river is one of a number of channel types
Channel types
A wide variety of river and stream channel types exist in limnology. All these can be divided into two groups by using the water-flow gradient as either low gradient channels for streams or rivers with less than two percent flow gradient, or high gradient channels for those with greater than a 2%...
and has a channel
Stream channel
Stream channel is the physical confine of a stream consisting of a bed and stream banks.Stream channels exist in a variety of geometries. The stream channel development is controlled by both water and sediment movement. There is a difference between low gradient streams and high gradient streams...
that consists of a network of small channel
Channel (geography)
In physical geography, a channel is the physical confine of a river, slough or ocean strait consisting of a bed and banks.A channel is also the natural or human-made deeper course through a reef, sand bar, bay, or any shallow body of water...
s separated by small and often temporary island
Island
An island or isle is any piece of sub-continental land that is surrounded by water. Very small islands such as emergent land features on atolls can be called islets, cays or keys. An island in a river or lake may be called an eyot , or holm...
s called braid bars
Bar (river morphology)
A bar in a river is an elevated region of sediment that has been deposited by the flow. Types of bars include mid-channel bars , point bars , and mouth bars...
or, in British usage, ait
Ait
An ait is a small island. It is especially used to refer to islands found on the River Thames and its tributaries in England....
s or eyots. Braided streams occur in rivers with high slope and/or large sediment
Sediment
Sediment is naturally occurring material that is broken down by processes of weathering and erosion, and is subsequently transported by the action of fluids such as wind, water, or ice, and/or by the force of gravity acting on the particle itself....
load (Schumm and Kahn 1972). Braided channels are also typical of environments that dramatically decrease channel depth, and consequently channel velocity, such as river delta
River delta
A delta is a landform that is formed at the mouth of a river where that river flows into an ocean, sea, estuary, lake, reservoir, flat arid area, or another river. Deltas are formed from the deposition of the sediment carried by the river as the flow leaves the mouth of the river...
s, alluvial fan
Alluvial fan
An alluvial fan is a fan-shaped deposit formed where a fast flowing stream flattens, slows, and spreads typically at the exit of a canyon onto a flatter plain. A convergence of neighboring alluvial fans into a single apron of deposits against a slope is called a bajada, or compound alluvial...
s and peneplain
Peneplain
A peneplain is a low-relief plain representing the final stage of fluvial erosion during times of extended tectonic stability. The existence of peneplains, and peneplanation as a geomorphological process, is not without controversy, due to a lack of contemporary examples and uncertainty in...
s.

The channels and braid bars are usually highly mobile, with the river layout often changing significantly during flood
Flood
A flood is an overflow of an expanse of water that submerges land. The EU Floods directive defines a flood as a temporary covering by water of land not normally covered by water...
events (Hickin and Sichingabula 1988). Channels move sideways via differential velocity: On the outside of a curve, deeper, swift water picks up sediment (usually gravel
Gravel
Gravel is composed of unconsolidated rock fragments that have a general particle size range and include size classes from granule- to boulder-sized fragments. Gravel can be sub-categorized into granule and cobble...
or larger stones), which is re-deposited in slow-moving water on the inside of a bend.

The braided channels may flow within an area defined by relatively stable banks or may occupy an entire valley
Valley
In geology, a valley or dale is a depression with predominant extent in one direction. A very deep river valley may be called a canyon or gorge.The terms U-shaped and V-shaped are descriptive terms of geography to characterize the form of valleys...
floor. The Rakaia River
Rakaia River
The Rakaia River is in the Canterbury Plains in New Zealand's South Island. The Rakaia River is one of the largest braided rivers in New Zealand...
in Canterbury, New Zealand
Canterbury, New Zealand
The New Zealand region of Canterbury is mainly composed of the Canterbury Plains and the surrounding mountains. Its main city, Christchurch, hosts the main office of the Christchurch City Council, the Canterbury Regional Council - called Environment Canterbury - and the University of Canterbury.-...
has cut a channel 100 metres deep into the surrounding plain
Plain
In geography, a plain is land with relatively low relief, that is flat or gently rolling. Prairies and steppes are types of plains, and the archetype for a plain is often thought of as a grassland, but plains in their natural state may also be covered in shrublands, woodland and forest, or...
s.

Extensive braided river systems are found in only a few regions worldwide:

The enormous Brahmaputra
Brahmaputra River
The Brahmaputra , also called Tsangpo-Brahmaputra, is a trans-boundary river and one of the major rivers of Asia. It is the only Indian river that is attributed the masculine gender and thus referred to as a in Indo-Aryan languages and languages with Indo-Aryan influence...
-Jamuna River is a classic example of a braided river.

Europe contains two braided rivers: the Narew
Narew
The Narew River , in western Belarus and north-eastern Poland, is a left tributary of the Vistula river...
, in Poland and Belarus, and the Tagliamento in Northeastern Italy.

A notable example of a large braided stream in the contiguous United States is the Platte River
Platte River
The Platte River is a major river in the state of Nebraska and is about long. Measured to its farthest source via its tributary the North Platte River, it flows for over . The Platte River is a tributary of the Missouri River, which in turn is a tributary of the Mississippi River which flows to...
in central and western Nebraska
Nebraska
Nebraska is a state on the Great Plains of the Midwestern United States. The state's capital is Lincoln and its largest city is Omaha, on the Missouri River....
. The sediment of the arid Great Plains
Great Plains
The Great Plains are a broad expanse of flat land, much of it covered in prairie, steppe and grassland, which lies west of the Mississippi River and east of the Rocky Mountains in the United States and Canada. This area covers parts of the U.S...
is augmented by the presence of the nearby Sandhills region north of the river.

The upper third of the lower Yellow River
Yellow River
The Yellow River or Huang He, formerly known as the Hwang Ho, is the second-longest river in China and the sixth-longest in the world at the estimated length of . Originating in the Bayan Har Mountains in Qinghai Province in western China, it flows through nine provinces of China and empties into...
takes a braided form.