Gravel is an important commercial product, with a number of applications.

Can u provied me with any informations for gravel ?

Are Gravel Roads Made of REAL rocks or man made rocks????
More 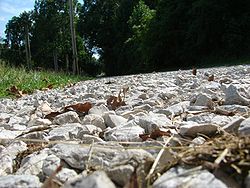 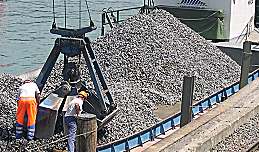 Large gravel deposits are a common geological feature, being formed as a result of the weathering
Weathering
Weathering is the breaking down of rocks, soils and minerals as well as artificial materials through contact with the Earth's atmosphere, biota and waters...
and erosion
Erosion
Erosion is when materials are removed from the surface and changed into something else. It only works by hydraulic actions and transport of solids in the natural environment, and leads to the deposition of these materials elsewhere...
of rocks. The action of rivers and waves tends to pile up gravel in large accumulations. This can sometimes result in gravel becoming compacted and concreted into the sedimentary rock called conglomerate
Conglomerate (geology)
A conglomerate is a rock consisting of individual clasts within a finer-grained matrix that have become cemented together. Conglomerates are sedimentary rocks consisting of rounded fragments and are thus differentiated from breccias, which consist of angular clasts...
. Where natural gravel deposits are insufficient for human purposes, gravel is often produced by quarrying and crushing hard-wearing rocks, such as sandstone, limestone, or basalt. Quarries where gravel is extracted are known as gravel pits. Southern England possesses particularly large concentrations of them due to the widespread deposition of gravel in the region during the Ice Age
Ice age
An ice age or, more precisely, glacial age, is a generic geological period of long-term reduction in the temperature of the Earth's surface and atmosphere, resulting in the presence or expansion of continental ice sheets, polar ice sheets and alpine glaciers...
s.

As of 2006, the United States is the world's leading producer and consumer of gravel.

The word comes from the French
French language
French is a Romance language spoken as a first language in France, the Romandy region in Switzerland, Wallonia and Brussels in Belgium, Monaco, the regions of Quebec and Acadia in Canada, and by various communities elsewhere. Second-language speakers of French are distributed throughout many parts...
gravelle, meaning 'coarse sand'. 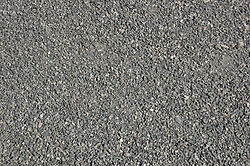 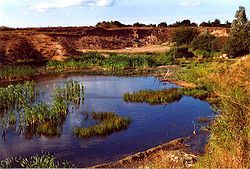 Multiple types of gravel have been recognized, including:

In locales where gravelly soil is predominant, plant life is generally more sparse. This outcome derives from the inferior ability of gravels to retain moisture, as well as the corresponding paucity of mineral nutrients, since finer soils that contain such minerals are present in smaller amounts.