Encyclopedia
Biedenkopf is a spa town
Spa town
A spa town is a town situated around a mineral spa . Patrons resorted to spas to "take the waters" for their purported health benefits. The word comes from the Belgian town Spa. In continental Europe a spa was known as a ville d'eau...
in western Hesse
Hesse
Hesse or Hessia is both a cultural region of Germany and the name of an individual German state.* The cultural region of Hesse includes both the State of Hesse and the area known as Rhenish Hesse in the neighbouring Rhineland-Palatinate state...
n, Germany
Germany
Germany , officially the Federal Republic of Germany , is a federal parliamentary republic in Europe. The country consists of 16 states while the capital and largest city is Berlin. Germany covers an area of 357,021 km2 and has a largely temperate seasonal climate...
with a population of 13,271.

The town of Biedenkopf lies in the west of Marburg-Biedenkopf district. Ringed by mountains reaching up to 674 m above sea level – the Sackpfeife in the Rothaargebirge
Rothaargebirge
The Rothaargebirge is a low mountain range reaching heights of up to 843.1 m in North Rhine-Westphalia and Hesse, Germany....
reaches this height – the town lies on the upper reaches of the river Lahn
Lahn
The Lahn River is a -long, right tributary of the Rhine River in Germany. Its course passes through the federal states of North Rhine-Westphalia , Hesse , and Rhineland-Palatinate ....
. Together with 18 other municipalities, it belongs to the Lahn-Dill-Bergland region

Clockwise from the north, the following towns and communities border on Biedenkopf: the towns of Hatzfeld and Battenberg
Battenberg, Hesse
Battenberg is a small town in the Waldeck-Frankenberg district in Hesse, Germany. The town is noted for giving its name to the Battenberg family, a morganatic branch of the ruling House of Hesse-Darmstadt, and through it, the name Mountbatten used by members of the British royal family, a literal...
in Waldeck-Frankenberg
Waldeck-Frankenberg
Waldeck-Frankenberg is a Kreis in the north of Hesse, Germany. Neighbouring districts are Höxter, Kassel, Schwalm-Eder, Marburg-Biedenkopf, Siegen-Wittgenstein, Hochsauerland.-History:...
district, in Marburg-Biedenkopf district the towns of Münchhausen am Christenberg
Münchhausen am Christenberg
The community of Münchhausen is found north of Marburg on the northern edge of Marburg-Biedenkopf district. It has 3,605 inhabitants and has had its current boundaries since 1974. The community's area is roughly 41 km².-Location:...
and Wetter
Wetter, Hesse
Wetter is a small town in Hesse, Germany. The rather unusual designation Wetter stems from a time when the town belonged to the Prussian province of the same name, and nowadays is only used by the railway – even today, the railway station in town bears this name.-Geography:Wetter lies in the...
and the communities of Dautphetal
Dautphetal
Dautphetal is a community in Hesse, Germany, and is among the six larger communities of the 22 in Marburg-Biedenkopf district.-Geography:The community lies in the western part of the district about 37 km east of Siegen and about 15 km west of Marburg in the upper Lahn valley. It is...
and Breidenbach
Breidenbach
Breidenbach is a community in the west of Marburg-Biedenkopf district in Hesse, Germany.-Neighbouring communities:*Bad Laasphe*Biedenkopf*Dautphetal*Eschenburg*Steffenberg-Community divisions:...
as well as the towns of Bad Laasphe
Bad Laasphe
Bad Laasphe is a town in North Rhine-Westphalia, Germany, in the Siegen-Wittgenstein district.-Location:The town of Bad Laasphe lies in the upper Lahn Valley, near the stately home of Wittgenstein Castle in the former Wittgenstein district...
and Bad Berleburg
Bad Berleburg
Bad Berleburg is a town, in the district of Siegen-Wittgenstein, in North Rhine-Westphalia, Germany. It is one of Germany's largest towns by land area. It is located approx...
in Siegen-Wittgenstein
Siegen-Wittgenstein
Siegen-Wittgenstein is a Kreis in the southeast of North Rhine-Westphalia, Germany. Neighboring districts are Olpe, Hochsauerlandkreis, Waldeck-Frankenberg, Marburg-Biedenkopf, Lahn-Dill, Westerwaldkreis, Altenkirchen.-History:...
district. 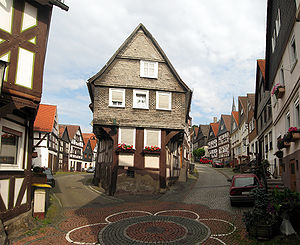 Divisions within the town

Biedenkopf's town council consists of 37 seats. At the last election in 2011, the seats were apportioned thus:


The CDU and SPD form a grand coalition.

The Kartoffelbraten – or popularly the Brott – is a typical Biedenkopf culinary custom which has grown out of the autumn potato
Potato
The potato is a starchy, tuberous crop from the perennial Solanum tuberosum of the Solanaceae family . The word potato may refer to the plant itself as well as the edible tuber. In the region of the Andes, there are some other closely related cultivated potato species...
harvest. In many places in the forest, traditionally in early autumn, the tasty tuber is cooked in the glow of a heap of charcoal
Charcoal
Charcoal is the dark grey residue consisting of carbon, and any remaining ash, obtained by removing water and other volatile constituents from animal and vegetation substances. Charcoal is usually produced by slow pyrolysis, the heating of wood or other substances in the absence of oxygen...
made from freshly felled beech
Beech
Beech is a genus of ten species of deciduous trees in the family Fagaceae, native to temperate Europe, Asia and North America.-Habit:...
wood. The unpeeled potato tastes best with butter
Butter
Butter is a dairy product made by churning fresh or fermented cream or milk. It is generally used as a spread and a condiment, as well as in cooking applications, such as baking, sauce making, and pan frying...
, salt
Salt
In chemistry, salts are ionic compounds that result from the neutralization reaction of an acid and a base. They are composed of cations and anions so that the product is electrically neutral...
, liverwurst
Liverwurst
The German , that translates literally as "liver sausage," is the typical sausage served in Germany, Austria, Hungary, Serbia, Slovenia, the Netherlands, Finland, Sweden and Romania . Liverwurst normally contains pigs' livers, rather than calves' livers and also contains veal...
and salad
Salad
Salad is any of a wide variety of dishes, including vegetable salads; salads of pasta, legumes, eggs, or grains; mixed salads incorporating meat, poultry, or seafood; and fruit salads. They may include a mixture of cold and hot, often including raw vegetables or fruits.Green salads include leaf...
. For the Biedenkopfer Kartoffelbraten, only three kinds of salad are traditionally served: radish
Radish
The radish is an edible root vegetable of the Brassicaceae family that was domesticated in Europe, in pre-Roman times. They are grown and consumed throughout the world. Radishes have numerous varieties, varying in size, color and duration of required cultivation time...
salad, onion
Onion
The onion , also known as the bulb onion, common onion and garden onion, is the most widely cultivated species of the genus Allium. The genus Allium also contains a number of other species variously referred to as onions and cultivated for food, such as the Japanese bunching onion The onion...
salad and herring
Herring
Herring is an oily fish of the genus Clupea, found in the shallow, temperate waters of the North Pacific and the North Atlantic oceans, including the Baltic Sea. Three species of Clupea are recognized. The main taxa, the Atlantic herring and the Pacific herring may each be divided into subspecies...
salad.

In the 2001 Middle Hesse Regional Plan, the former district seat (Kreisstadt) Biedenkopf is designated the middle centre
Central Place Theory
Central place theory is a geographical theory that seeks to explain the number, size and location of human settlements in an urban system. The theory was created by the German geographer Walter Christaller, who asserted that settlements simply functioned as 'central places' providing services to...
in the rural area. The town is part of the Marburg - Dautphetal - Biedenkopf - (Bad Laasphe) development belt. This belt's job is to open up the region, to make possible an exchange of goods and services between middle centres as well as to connect the region to the high centre of Marburg and to the long-distance transportation network. Building on public transport is thus given special importance.

Moreover, there exists a local transport and population belt, Dillenburg - Steffenberg - Breidenbach – Biedenkopf, with a regional connective function. Together with Dautphetal and Breidenbach, Biedenkopf is described as a commercial hub.

The Obere Lahntalbahn is the only railway line that serves the town. In May 1987, passenger traffic towards Dillenburg
Dillenburg
Dillenburg is a town in Hesse's Gießen region in Germany. The town was formerly the seat of the old Dillkreis district, which is now part of the Lahn-Dill-Kreis....
on the Scheldetalbahn was discontinued. Minor freight services persisted for a few years serving the Buderus firm until December 2002.

Biedenkopf is joined by the Obere Lahntalbahn (a Deutsche Bahn
Deutsche Bahn
Deutsche Bahn AG is the German national railway company, a private joint stock company . Headquartered in Berlin, it came into existence in 1994 as the successor to the former state railways of Germany, the Deutsche Bundesbahn of West Germany and the Deutsche Reichsbahn of East Germany...
line) to Erndtebrück
Erndtebrück
Erndtebrück is a municipality in the Siegen-Wittgenstein district, in North Rhine-Westphalia, Germany.-Location:Erndtebrück situated on the river Eder in the Rothaargebirge, approx...
in Siegen-Wittgenstein
Siegen-Wittgenstein
Siegen-Wittgenstein is a Kreis in the southeast of North Rhine-Westphalia, Germany. Neighboring districts are Olpe, Hochsauerlandkreis, Waldeck-Frankenberg, Marburg-Biedenkopf, Lahn-Dill, Westerwaldkreis, Altenkirchen.-History:...
district and the town of Marburg
Marburg
Marburg is a city in the state of Hesse, Germany, on the River Lahn. It is the main town of the Marburg-Biedenkopf district and its population, as of March 2010, was 79,911.- Founding and early history :...
by way of Bad Laasphe, Dautphetal and Lahntal. The railway serves three stations in Biedenkopf: Wallau, Biedenkopf-Schulzentrum and Biedenkopf.

In Biedenkopf and its outlying communities, machine manufacture and mould making have always been strongly represented. Among the companies in this business are Meissner AG (model- and toolmaking), Banss Schlacht- und Fördertechnik GmbH and CFS (packing systems, formerly Krämer & Grebe Tiromat). Furthermore, processing synthetic products is another of the town's industries, represented by, among others, the firm Elkamet.

Biedenkopf also has a DRK
German Red Cross
The German Red Cross , or the DRK, is the national Red Cross Society in Germany.With over 4.5 million members, it is the third largest Red Cross society in the world. The German Red Cross offers a wide range of services within and outside Germany...
hospital with 110 beds. Alongside surgery
Surgery
Surgery is an ancient medical specialty that uses operative manual and instrumental techniques on a patient to investigate and/or treat a pathological condition such as disease or injury, or to help improve bodily function or appearance.An act of performing surgery may be called a surgical...
, the areas of specialization include gynaecology
Gynaecology
Gynaecology or gynecology is the medical practice dealing with the health of the female reproductive system . Literally, outside medicine, it means "the science of women"...
and obstetrics
Obstetrics
Obstetrics is the medical specialty dealing with the care of all women's reproductive tracts and their children during pregnancy , childbirth and the postnatal period...
, internal medicine
Internal medicine
Internal medicine is the medical specialty dealing with the prevention, diagnosis, and treatment of adult diseases. Physicians specializing in internal medicine are called internists. They are especially skilled in the management of patients who have undifferentiated or multi-system disease processes...
, and urology
Urology
Urology is the medical and surgical specialty that focuses on the urinary tracts of males and females, and on the reproductive system of males. Medical professionals specializing in the field of urology are called urologists and are trained to diagnose, treat, and manage patients with urological...
.

Since 1953, Biedenkopf has been host to a Hessischer Rundfunk
Hessischer Rundfunk
Hessischer Rundfunk is the public broadcaster for the German state of Hesse. The main offices of HR are in Frankfurt am Main. HR is a member of the ARD.- Studios :...
VHF and television
Television
Television is a telecommunication medium for transmitting and receiving moving images that can be monochrome or colored, with accompanying sound...
transmission facility on the Sackpfeife. The antenna are borne by a 210-m guyed steel-lattice mast with a diagonal cross-section measure of 1.8 m. Its position is 50°57'8"N, 8°32'1"E.