Encyclopedia
Bad Laasphe (ˈbaːt ˈlaːsfə) is a town in North Rhine-Westphalia
North Rhine-Westphalia
North Rhine-Westphalia is the most populous state of Germany, with four of the country's ten largest cities. The state was formed in 1946 as a merger of the northern Rhineland and Westphalia, both formerly part of Prussia. Its capital is Düsseldorf. The state is currently run by a coalition of the...
, Germany
Germany
Germany , officially the Federal Republic of Germany , is a federal parliamentary republic in Europe. The country consists of 16 states while the capital and largest city is Berlin. Germany covers an area of 357,021 km2 and has a largely temperate seasonal climate...
, in the Siegen-Wittgenstein
Siegen-Wittgenstein
Siegen-Wittgenstein is a Kreis in the southeast of North Rhine-Westphalia, Germany. Neighboring districts are Olpe, Hochsauerlandkreis, Waldeck-Frankenberg, Marburg-Biedenkopf, Lahn-Dill, Westerwaldkreis, Altenkirchen.-History:...
district.

The town of Bad Laasphe lies in the upper Lahn
Lahn
The Lahn River is a -long, right tributary of the Rhine River in Germany. Its course passes through the federal states of North Rhine-Westphalia , Hesse , and Rhineland-Palatinate ....
Valley, near the stately home of Wittgenstein Castle (de) (nowadays a boarding school
Boarding school
A boarding school is a school where some or all pupils study and live during the school year with their fellow students and possibly teachers and/or administrators. The word 'boarding' is used in the sense of "bed and board," i.e., lodging and meals...
) in the former Wittgenstein district. The municipal area is located south of the main crest of the Rothaargebirge
Rothaargebirge
The Rothaargebirge is a low mountain range reaching heights of up to 843.1 m in North Rhine-Westphalia and Hesse, Germany....
, and borders in the north on the towns of Bad Berleburg
Bad Berleburg
Bad Berleburg is a town, in the district of Siegen-Wittgenstein, in North Rhine-Westphalia, Germany. It is one of Germany's largest towns by land area. It is located approx...
and Erndtebrück
Erndtebrück
Erndtebrück is a municipality in the Siegen-Wittgenstein district, in North Rhine-Westphalia, Germany.-Location:Erndtebrück situated on the river Eder in the Rothaargebirge, approx...
, in the east on the town of Biedenkopf
Biedenkopf
Biedenkopf is a spa town in western Hessen, Germany with a population of 13,271.- Location :The town of Biedenkopf lies in the west of Marburg-Biedenkopf district. Ringed by mountains reaching up to 674 m above sea level – the Sackpfeife in the Rothaargebirge reaches this height – the town...
in Hessen, in the southeast on Breidenbach
Breidenbach
Breidenbach is a community in the west of Marburg-Biedenkopf district in Hesse, Germany.-Neighbouring communities:*Bad Laasphe*Biedenkopf*Dautphetal*Eschenburg*Steffenberg-Community divisions:...
, in the south on Dietzhölztal
Dietzhölztal
The community of Dietzhölztal is the northernmost municipality in the Lahn-Dill-Kreis in Hesse, Germany.-Geography:The community is located in a valley of the same name, only a few kilometres east of the border with North Rhine-Westphalia....
and in the west on the town of Netphen
Netphen
Netphen is a town in the Siegen-Wittgenstein district, in North Rhine-Westphalia, Germany. It lies on the river Sieg, roughly 7 km northeast of Siegen.-Location:...
. Bad Laasphe lies about 30 km east of Siegen
Siegen
Siegen is a city in Germany, in the south Westphalian part of North Rhine-Westphalia.It is located in the district of Siegen-Wittgenstein in the Arnsberg region...
and 25 km northwest of Marburg
Marburg
Marburg is a city in the state of Hesse, Germany, on the River Lahn. It is the main town of the Marburg-Biedenkopf district and its population, as of March 2010, was 79,911.- Founding and early history :...
.

The highest elevation in the municipal area rises to 694 m. It lies southwest of the main town at the outlying centre of Heiligenborn. 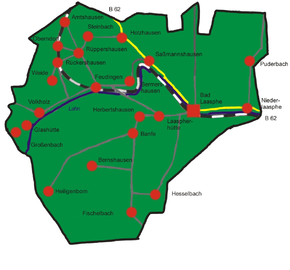 Each one of the following centres is part of the town of Bad Laasphe:

In 1888, the town of Laasphe lay in the Prussia
Prussia
Prussia was a German kingdom and historic state originating out of the Duchy of Prussia and the Margraviate of Brandenburg. For centuries, the House of Hohenzollern ruled Prussia, successfully expanding its size by way of an unusually well-organized and effective army. Prussia shaped the history...
n administrative region of Arnsberg
Arnsberg
Arnsberg is a town in the Hochsauerland district, in North Rhine-Westphalia, Germany. It is the location of the Regierungsbezirk Arnsberg's administration and one of the three local administration offices of the Hochsauerlandkreis.-Geography:...
in Wittgenstein district and was connected to the Kreuzthal-Marburg line of the Prussian State Railway (Preußische Staatsbahn). In 1888 Laasphe had a junior teachers' college, a local court
Court
A court is a form of tribunal, often a governmental institution, with the authority to adjudicate legal disputes between parties and carry out the administration of justice in civil, criminal, and administrative matters in accordance with the rule of law...
and knitwear and hosiery
Hosiery
Hosiery, also referred to as legwear, describes garments worn directly on the feet and legs. The term originated as the collective term for products of which a maker or seller is termed a hosier; and those products are also known generically as hose...
factories. In 1885, Laasphe had 2225 mostly Evangelical
Evangelical Church in Germany
The Evangelical Church in Germany is a federation of 22 Lutheran, Unified and Reformed Protestant regional church bodies in Germany. The EKD is not a church in a theological understanding because of the denominational differences. However, the member churches share full pulpit and altar...
inhabitants. Schloss Wittgenstein owned two ironworks
Ironworks
An ironworks or iron works is a building or site where iron is smelted and where heavy iron and/or steel products are made. The term is both singular and plural, i.e...
. (From Meyers Konversations-Lexikon
Meyers Konversations-Lexikon
Meyers Konversations-Lexikon or Meyers Lexikon was a major German encyclopedia that existed in various editions, and several titles, from 1839 until 1984, when it merged with the Brockhaus encyclopedia....
)

Bad Laasphe's civic coat of arms
Coat of arms
A coat of arms is a unique heraldic design on a shield or escutcheon or on a surcoat or tabard used to cover and protect armour and to identify the wearer. Thus the term is often stated as "coat-armour", because it was anciently displayed on the front of a coat of cloth...
might heraldically be described thus: In sable a town wall with open gate tower argent flanked by two crenellated towers argent, between which an inescutcheon in argent two pallets sable.

A stamping of the town's seal from the 14th century has been preserved, which shows the same composition as the arms shown here. The inescutcheon (smaller shield within the main one) bears the same arms as the town's former overlords, the Counts of Wittgenstein. When the arms were revised in 1908, the town came up with another composition which looked the same, but the inescutcheon, owing to a misunderstanding, was rather different, being quartered with two opposite quarters showing in gules (red) a castle argent (silver), and in the two other quarters the Wittgenstein pallets. The castle charge was a modern addition and related to the Wittgensteins' overlordship in Homburg
Homburg
-In Germany:* Homburg, Saarland, capital of the Saarpfalz district of Saarland* Bad Homburg, town and spa in Hesse* Homburg Forest, a hill range in Lower Saxony* Homburg, a quarter of Triefenstein, Bavaria...
. The town archive suggested even then that the inescutcheon bear the old Wittgenstein arms as seen in the town's oldest known seal, but no decision was made about it at that time. Only in 1936 did the town finally decide to revert to the composition shown in the old seal. This was confirmed as the town's arms on 10 March 1937.

Tamworth
Tamworth
Tamworth is a town and local government district in Staffordshire, England, located north-east of Birmingham city centre and north-west of London. The town takes its name from the River Tame, which flows through the town, as does the River Anker...
, United Kingdom
United Kingdom
The United Kingdom of Great Britain and Northern IrelandIn the United Kingdom and Dependencies, other languages have been officially recognised as legitimate autochthonous languages under the European Charter for Regional or Minority Languages...
, since 10 October 1980 Châteauneuf-sur-Loire
Châteauneuf-sur-Loire
Châteauneuf-sur-Loire is a commune in the Loiret department in north-central France.-See also:*Communes of the Loiret department...
, France
France
The French Republic , The French Republic , The French Republic , (commonly known as France , is a unitary semi-presidential republic in Western Europe with several overseas territories and islands located on other continents and in the Indian, Pacific, and Atlantic oceans. Metropolitan France...
, since 28 September 1991