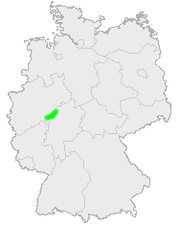 The Rothaargebirge is a low mountain range
Mountain range
A mountain range is a single, large mass consisting of a succession of mountains or narrowly spaced mountain ridges, with or without peaks, closely related in position, direction, formation, and age; a component part of a mountain system or of a mountain chain...
reaching heights of up to 843.1 m in North Rhine-Westphalia
North Rhine-Westphalia
North Rhine-Westphalia is the most populous state of Germany, with four of the country's ten largest cities. The state was formed in 1946 as a merger of the northern Rhineland and Westphalia, both formerly part of Prussia. Its capital is Düsseldorf. The state is currently run by a coalition of the...
and Hesse
Hesse
Hesse or Hessia is both a cultural region of Germany and the name of an individual German state.* The cultural region of Hesse includes both the State of Hesse and the area known as Rhenish Hesse in the neighbouring Rhineland-Palatinate state...
, Germany
Germany
Germany , officially the Federal Republic of Germany , is a federal parliamentary republic in Europe. The country consists of 16 states while the capital and largest city is Berlin. Germany covers an area of 357,021 km2 and has a largely temperate seasonal climate...
.

It is believed that its name must once have been Rod-Hard-Gebirge, or "the cleared forest mountain range", as the range has nothing whatsoever to do with the colour red (rot in German
German language
German is a West Germanic language, related to and classified alongside English and Dutch. With an estimated 90 – 98 million native speakers, German is one of the world's major languages and is the most widely-spoken first language in the European Union....
), nor with hair (Haar). 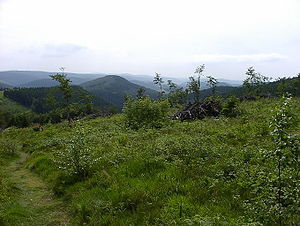 The thickly wooded Rothaargebirge, rich in mineral deposits, is found mostly in Westphalia
Westphalia
Westphalia is a region in Germany, centred on the cities of Arnsberg, Bielefeld, Dortmund, Minden and Münster.Westphalia is roughly the region between the rivers Rhine and Weser, located north and south of the Ruhr River. No exact definition of borders can be given, because the name "Westphalia"...
between the Sauerland
Sauerland
The Sauerland is a rural, hilly area spreading across most of the south-eastern part of North Rhine-Westphalia, in parts heavily forested and, apart from the major valleys, sparsely inhabited...
in the north, the Upland
Upland (Hesse)
The Upland, which is Low German for something like Oberland or Auf dem Land , is the northeastern part of the Hochsauerland and belongs the German state of Hesse, unlike the remainder of the Hochsauerland which lies in Westphalia...
(northeastern foothills of the Rothaargebirge) in the northeast, the Wittgensteiner Land in the southeast and the Siegerland
Siegerland
The Siegerland is a region of Germany covering the old district of Siegen and the upper part of the district of Altenkirchen, belonging to the Rhineland-Palatinate adjoining it to the west.Geologically, the Siegerland belongs to the Rheinisches Schiefergebirge...
in the southwest; only the range's southeastern foothills are actually in Hesse. It stretches from the upper Eder
Eder
The Eder is a 177 km long river in Germany, and a tributary of the Fulda River. It was first mentioned by the Roman historian Tacitus as the Adrana in the territory of the Chatti....
and the Lenne
Lenne
The Lenne is a river in the Sauerland area in North Rhine-Westphalia, western Germany, a left tributary of the Ruhr.Having its source on top of the Kahler Asten near Winterberg in an intermittent spring at an elevation of 2,687 feet, the Lenne ends after a course of 128 km flowing into the...
from the Kahler Asten
Kahler Asten
The Kahler Asten is an 841.9-meter-high mountain in the Rothaargebirge range in the district of Hochsauerland, in the German state of North Rhine-Westphalia...
(841 m) southwest of the Winterberg Tableland (Winterberger Hochfläche) some 30 km to the southwest and drops off steeply towards the west, but much less sharply towards the east.

The Rothaargebirge is a narrow, banklike, mostly over 600 m high mountain chain forming geologically a large northeastern part of the Rhine Massif (German: Rheinisches Schiefergebirge or "Rhenish Slate Mountains"). Since the land's elevation averages quite high, the mountains themselves, up to the 843.1 m-high Langenberg
Langenberg (Rothaargebirge)
The Langenberg rises on the state border between North Rhine-Westphalia and Hesse in Germany and, at , is the highest peak in the Rothaargebirge mountain range, as well as the highest point in the North Rhine-Westphalia and also in the north of Germany outside of the Harz Mountains.- Geographical...
hardly stand out from each other. 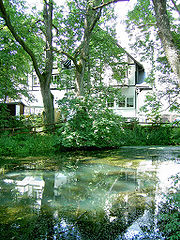 In the northern Rothaargebirge rise, among others, the rivers Diemel
Diemel
The Diemel is a river in Hesse and North Rhine-Westphalia, Germany, left tributary of the Weser. Its source is near Willingen, in Sauerland. The Diemel flows generally northeast through the towns Marsberg, Warburg and Trendelburg. It flows into the Weser in Bad Karlshafen. The total length of the...
, Lenne
Lenne
The Lenne is a river in the Sauerland area in North Rhine-Westphalia, western Germany, a left tributary of the Ruhr.Having its source on top of the Kahler Asten near Winterberg in an intermittent spring at an elevation of 2,687 feet, the Lenne ends after a course of 128 km flowing into the...
, Neger, Nuhne, Odeborn, Orke, Ruhr, Wenne and Wilde Aa. In the south rise the Dill
Dill (river)
The Dill is a long river, flowing through central Hesse in Germany. It is a tributary to the Lahn, joining it on the right bank at the town of Wetzlar.-Course:The Dill flows exclusively through the Lahn-Dill-Kreis district in Hesse...
, Eder
Eder
The Eder is a 177 km long river in Germany, and a tributary of the Fulda River. It was first mentioned by the Roman historian Tacitus as the Adrana in the territory of the Chatti....
, Ferndorfbach, Ilse, Lahn
Lahn
The Lahn River is a -long, right tributary of the Rhine River in Germany. Its course passes through the federal states of North Rhine-Westphalia , Hesse , and Rhineland-Palatinate ....
and Sieg
Sieg
The Sieg is a river in North Rhine-Westphalia and Rhineland-Palatinate, Germany named after the Sigambrer. It is a right tributary of the Rhine and 153 kilometres in length....
. Over the range runs the Rhine-Weser watershed
Water divide
A drainage divide, water divide, divide or watershed is the line separating neighbouring drainage basins...
. In the farthest southwest of the Rothaargebirge, and also the Rothaargebirge Nature Park, are the Obernau and Breitenbach dam
Dam
A dam is a barrier that impounds water or underground streams. Dams generally serve the primary purpose of retaining water, while other structures such as floodgates or levees are used to manage or prevent water flow into specific land regions. Hydropower and pumped-storage hydroelectricity are...
s.

Among the best known (but not necessarily the highest) of the Rothaargebirge's peaks, which consist partly of porphyry
Porphyry (geology)
Porphyry is a variety of igneous rock consisting of large-grained crystals, such as feldspar or quartz, dispersed in a fine-grained feldspathic matrix or groundmass. The larger crystals are called phenocrysts...
, are (including all "Achthunderter", or "eight-hundreders", sorted by height):

The German Wikipedia has a more exhaustive list of the Rothaargebirge's many peaks. 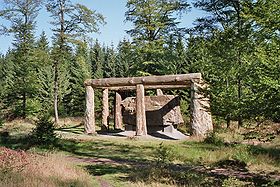 Through the Rothaargebirge run many hiking
Hiking
Hiking is an outdoor activity which consists of walking in natural environments, often in mountainous or other scenic terrain. People often hike on hiking trails. It is such a popular activity that there are numerous hiking organizations worldwide. The health benefits of different types of hiking...
trails, among others the Rothaarsteig
Rothaarsteig
The Rothaarsteig is a 154.80 km long hiking trail along the crest of the Rothaargebirge mountain range in Germany in the border region between the states of North Rhine-Westphalia and Hesse...
, a 154 km-long trail through the heights, and the Waldskulpturenweg ("Forest Sculpture Way") along which are found various sculptures and other artworks by different artists.

In winter, many sporting opportunities beckon visitors to the range. Suitable facilities for this include the Postwiesen skiing
Skiing
Skiing is a recreational activity using skis as equipment for traveling over snow. Skis are used in conjunction with boots that connect to the ski with use of a binding....
area (near Neuastenberg), the Skiliftkarussell Winterberg and Snow World Züschen.

Within or on the outskirts of the Rothaargebirge are found the Panorama-Park Sauerland and Fort Fun Abenteuerland amusement park
Amusement park
thumb|Cinderella Castle in [[Magic Kingdom]], [[Disney World]]Amusement and theme parks are terms for a group of entertainment attractions and rides and other events in a location for the enjoyment of large numbers of people...
s.

The club Taurus Naturentwicklung e. V. in coöperation with the Wittgenstein-Berleburg'sche Rentkammer and the internationally active Large Herbivore Foundation (LHF), and with the involvement of the Hochsauerland biological station, is preparing to reintroduce free-ranging wisent
Wisent
The wisent , Bison bonasus, also known as the European bison or European wood bison, is a species of Eurasian bison. It is the heaviest surviving land animal in Europe; a typical wisent is about long, not counting a tail of long, and tall. Weight typically can range from , with an occasional big...
s into the Rothaargebirge (Sauerland, North Rhine-Westphalia). The project is, however, not without its controversy in the region, with cultivators in particular worrying about possible damage that the creatures might do.