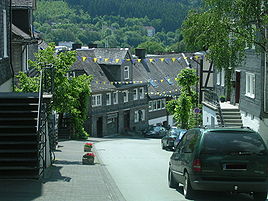 Bad Berleburg lies in the northeast of Siegen-Wittgenstein in the middle of the Rothaargebirge
Rothaargebirge
The Rothaargebirge is a low mountain range reaching heights of up to 843.1 m in North Rhine-Westphalia and Hesse, Germany....
, a low mountain range. The western town limit is also the boundary with the neighbouring district of Olpe
Olpe (district)
Olpe is a Kreis in the south-east of North Rhine-Westphalia, Germany. Neighboring districts are Märkischer Kreis, Hochsauerland, Siegen-Wittgenstein, Altenkirchen, Oberbergischer Kreis.- History :...
. The town is also bordered on the north by the Hochsauerland
Hochsauerland
Hochsauerlandkreis is a Kreis in the east of North Rhine-Westphalia, Germany. Neighboring districts are Soest, Paderborn, Höxter, Waldeck-Frankenberg, Siegen-Wittgenstein, Olpe, Märkischer Kreis.- History :...
district. The town's eastern limit is likewise the boundary with the Bundesland
States of Germany
Germany is made up of sixteen which are partly sovereign constituent states of the Federal Republic of Germany. Land literally translates as "country", and constitutionally speaking, they are constituent countries...
of Hesse
Hesse
Hesse or Hessia is both a cultural region of Germany and the name of an individual German state.* The cultural region of Hesse includes both the State of Hesse and the area known as Rhenish Hesse in the neighbouring Rhineland-Palatinate state...
. The town of Bad Laasphe
Bad Laasphe
Bad Laasphe is a town in North Rhine-Westphalia, Germany, in the Siegen-Wittgenstein district.-Location:The town of Bad Laasphe lies in the upper Lahn Valley, near the stately home of Wittgenstein Castle in the former Wittgenstein district...
borders on Bad Berleburg in the south, and the community of Erndtebrück
Erndtebrück
Erndtebrück is a municipality in the Siegen-Wittgenstein district, in North Rhine-Westphalia, Germany.-Location:Erndtebrück situated on the river Eder in the Rothaargebirge, approx...
in the southwest.

This is where this town of widely scattered centres is to be found, at the place where the river Odeborn empties into the Eder
Eder
The Eder is a 177 km long river in Germany, and a tributary of the Fulda River. It was first mentioned by the Roman historian Tacitus as the Adrana in the territory of the Chatti....
.

Since 1975, each one of the following centres has been part of Bad Berleburg:

Archaeological
Archaeology
Archaeology, or archeology , is the study of human society, primarily through the recovery and analysis of the material culture and environmental data that they have left behind, which includes artifacts, architecture, biofacts and cultural landscapes...
finds confirm that the area covered by today's municipal area was settled as far back as the 7th century BC. On the castle hills at Aue, Dotzlar and Wemlighausen are traces of circular forts from this time. There is, however, no evidence of settlement in the area for the time that follows, up to the 8th century.

The constituent communities of Arfeld and Raumland were mentioned in documents in 800 and 802 respectively. There are also documents from 1059 confirming the existence of Alertshausen, Beddelhausen, Elsoff and Schwarzenau. In 1174, the name "Widechinstein" was mentioned for the first time. The village of Berleburg is mentioned for the first time in 1258 in documents from the Grafschaft monastery (in this instance Grafschaft is a location rather than the German word for "county"), under the name Berneborg. The castle passed on 30 March 1258 to Count Siegfried I and the "monastery reeve" ("Klostervogt") Adolf von Grafschaft. In 1322, this double overlordship in Berleburg was ended by Widekind von Grafschaft when he forwent his rights to the town in Siegfried II's favour. Siegfried was the last of his noble line, and when he died, the inheritance went to his son-in-law, Salentin von Sayn. He founded the House of Sayn-Wittgenstein
Sayn-Wittgenstein
Sayn-Wittgenstein was a county of mediæval Germany, located in the Sauerland of eastern North Rhine-Westphalia. Sayn-Wittgenstein was created when Count Salentin of Sayn-Homburg married the heiress Countess Adelaide of Wittgenstein in 1345...
.

Until Count Ludwig the Elder's death in 1605, Berleburg was developing itself into a capital and residence town of the County of Sayn-Wittgenstein-Berleburg, which in the 18th century was a centre in Germany for the Inspiration Movement, which had grown out of radical pietism
Pietism
Pietism was a movement within Lutheranism, lasting from the late 17th century to the mid-18th century and later. It proved to be very influential throughout Protestantism and Anabaptism, inspiring not only Anglican priest John Wesley to begin the Methodist movement, but also Alexander Mack to...
. Between 1726 and 1742, the well known Berleburg Bible was printed here. Christoph Sauer
Christoph Sauer
Christoph Sauer was the first German-language printer and publisher in North America.Johann Christoph Sauer was born in 1695 in Ladenburg , the son of a Reformed pastor. He came to the County of Wittgenstein in central Germany as a child with his widowed mother some time between 1700-1710...
(1695–1758) lived at Schwarzenau for a few years before emigrating to Pennsylvania in 1724. There in 1743 he would print the first German-language Bible in North America with a press and Fraktur
Fraktur
Fraktur is a calligraphic hand and any of several blackletter typefaces derived from this hand. The word derives from the past participle fractus of Latin frangere...
type formerly used by the Berleburg Pietists. Tolerance of religious dissenters ebbed by the mid-1750s.

Wittgenstein was placed under the Grand Duchy of Hesse-Darmstadt
Grand Duchy of Hesse
The Grand Duchy of Hesse and by Rhine , or, between 1806 and 1816, Grand Duchy of Hesse —as it was also known after 1816—was a member state of the German Confederation from 1806, when the Landgraviate of Hesse-Darmstadt was elevated to a Grand Duchy, until 1918, when all the German...
in 1806. Under the terms of the Congress of Vienna
Congress of Vienna
The Congress of Vienna was a conference of ambassadors of European states chaired by Klemens Wenzel von Metternich, and held in Vienna from September, 1814 to June, 1815. The objective of the Congress was to settle the many issues arising from the French Revolutionary Wars, the Napoleonic Wars,...
, it was then ceded to the Prussia
Prussia
Prussia was a German kingdom and historic state originating out of the Duchy of Prussia and the Margraviate of Brandenburg. For centuries, the House of Hohenzollern ruled Prussia, successfully expanding its size by way of an unusually well-organized and effective army. Prussia shaped the history...
n province of Westphalia
Province of Westphalia
The Province of Westphalia was a province of the Kingdom of Prussia and the Free State of Prussia from 1815 to 1946.-History:Napoleon Bonaparte founded the Kingdom of Westphalia, which was a client state of the First French Empire from 1807 to 1813...
in 1816.

When the Rothaarbahn railway was built to Berleburg in 1911, it brought with it the onset of industrialization, although it was limited to forest products at first. Other forms of industry did not come to town until after the Second World War.

The town was already acknowledged as a climatic spa in 1935 for its gentle and agreeably mild climate. After 1949, the Klinik Wittgenstein was built as a psychosomatic
Psychosomatic illness
Psychosomatic medicine is an interdisciplinary medical field studying the relationships of social, psychological, and behavioral factors on bodily processes and well-being in humans and animals...
hospital.

In 1951, on private initiative, a Kneipp
Sebastian Kneipp
Sebastian Kneipp was a Bavarian priest and one of the founders of the Naturopathic medicine movement...
spa association was founded, which was the forerunner to the Wittgenstein spa institution (Wittgensteiner Kuranstalt; WKA). In the first year that the WKA Kneipp spa works were open, there were 11,000 overnight stays. Little by little, Berleburg became Germany's second largest Kneipp spa.

In 1971, once the town had been granted state recognition as a Kneipp spa, Berleburg was entitled to use the prefix Bad (lit. "bath") with its name, thereby becoming the town of Bad Berleburg, as it has been known ever since. In 1974 also came recognition as a curative spa.

In 1975, with the Sauerland-Paderborn Law, dealing with municipal reform, the surrounding Amt
Amt (subnational entity)
Amt is a type of administrative division governing a group of municipalities, today only found in Germany, but formerly also common in northern European countries. Its size and functions differ by country and the term is roughly equivalent to a U.S...
of Berleburg was abolished, and a great deal of it then became part of the town of Bad Berleburg, making the town North Rhine-Westphalia's second largest by land area. The communities of Hoheleye, Langewiese, Mollseifen and Neuastenberg were assigned to the newly established Hochsauerland
Hochsauerland
Hochsauerlandkreis is a Kreis in the east of North Rhine-Westphalia, Germany. Neighboring districts are Soest, Paderborn, Höxter, Waldeck-Frankenberg, Siegen-Wittgenstein, Olpe, Märkischer Kreis.- History :...
district. They are today constituent communities of Winterberg
Winterberg
Winterberg is a town in the Hochsauerland district of North Rhine-Westphalia, Germany and a major winter sport resort of the Wintersport Arena Sauerland.-Geography:...
. The communities of Balde, Birkelbach, Birkefehl, Leimstruth and Womelsdorf were transferred to the community of Erndtebrück
Erndtebrück
Erndtebrück is a municipality in the Siegen-Wittgenstein district, in North Rhine-Westphalia, Germany.-Location:Erndtebrück situated on the river Eder in the Rothaargebirge, approx...
. At the same time, the old district of Wittgenstein was dissolved and added to Siegen district.

In 1984, this district's name was changed to Siegen-Wittgenstein, as it is still called now.

The town council's 38 seats are apportioned thus, in accordance with municipal elections held on 26 September 2004:
Note: UWG is a citizens' coalition. 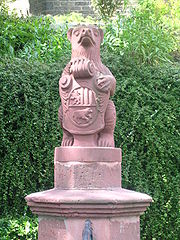 The lion rampant is the mark of the House of Sayn, and the bear stands for the hunt. Some sources, on the other hand, say that it is a canting
Canting arms
Canting arms are heraldic bearings that represent the bearer's name in a visual pun or rebus. The term cant came into the English language from Anglo-Norman cant, meaning song or singing, from Latin cantāre, and English cognates include canticle, chant, accent, incantation and recant.Canting arms –...
symbol ("Bear" is Bär in German
German language
German is a West Germanic language, related to and classified alongside English and Dutch. With an estimated 90 – 98 million native speakers, German is one of the world's major languages and is the most widely-spoken first language in the European Union....
, pronounced the same way as the first syllable of Berleburg).http://www.ngw.nl/int/dld/b/bad-berl.htm The House of Wittgenstein is also represented by the pallets (vertical stripes) from their old arms.

The municipal area is crossed from north to south by Federal Highway (Bundesstraße) 480, joining Bad Berleburg with Winterberg in the north and Erndtebrück in the south.

The Rothaarbahn railway reaches the town from the south, ending there. Until 31 May 1981 there was a connection from Bad Berleburg to Allendorf
Allendorf (Eder)
Allendorf is a municipality in Waldeck-Frankenberg in Hesse, Germany.- Location :Allendorf lies in the upper Eder Valley between Frankenberg and Battenberg west of the Burgwald range and east of the Breite Struth ....
and Frankenberg by the Upper Edertalbahn and the Ruhr-Eder-Bahn.