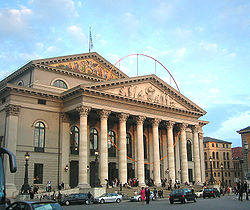 The Bavarian State Opera is an opera
Opera
Opera is an art form in which singers and musicians perform a dramatic work combining text and musical score, usually in a theatrical setting. Opera incorporates many of the elements of spoken theatre, such as acting, scenery, and costumes and sometimes includes dance...
company based in Munich
Munich
Munich The city's motto is "" . Before 2006, it was "Weltstadt mit Herz" . Its native name, , is derived from the Old High German Munichen, meaning "by the monks' place". The city's name derives from the monks of the Benedictine order who founded the city; hence the monk depicted on the city's coat...
, Germany.
Its orchestra is the Bavarian State Orchestra
Bavarian State Orchestra
The Bayerisches Staatsorchester is the orchestra of the Bavarian State Opera.- History :Founded in the times of Ludwig Senfl the orchestra, specializing in musica sacra, belonged to the finest ones in Europe already under Orlando di Lasso . In 1651 the Italian opera was introduced in Munich...
.

The opera company which was founded under Princess Henriette Adelaide of Savoy has been in existence since 1653. In 1753 the Residence Theatre
Cuvilliés Theatre
The Cuvilliés Theatre or Old Residence Theatre is the former court theatre of the Residenz in Munich, southern Germany.- Description :...
was opened as major stage.
While opera performances were also held in the Prinzregententheater
Prinzregententheater
The Prinzregententheater, or Prince Regent's Theatre, is a theatre and opera house located at 12 Prinzregentenplatz in the Bavarian city of Munich, Germany.- Building and History :...
(completed in 1901), the company's home base is the National Theatre Munich on Max-Joseph-Platz
Max-Joseph-Platz
Max-Joseph-Platz is a large square in central Munich which was named after King Maximilian Joseph. Max-Joseph-Platz serves as the western starting point of the royal avenue Maximilianstraße.-Architecture:...
.

Sir Peter Jonas
Peter Jonas (director)
Sir Peter Jonas, CBE, FRCM, FRNCM, FRSA, b.14 October 1946, is a British Arts Administrator and opera company director.-Career:Jonas studied at Worth School, and took an English Literature degree at the University of Sussex...
became the Staatsoper Staatsintendant (General Director) in 1993, the first British Intendant of any major German speaking Opera House. Since 1998 Zubin Mehta
Zubin Mehta
Zubin Mehta is an Indian conductor of western classical music. He is the Music Director for Life of the Israel Philharmonic Orchestra.-Biography:...
served as music director
Music director
A music director may be the director of an orchestra, the director of music for a film, the director of music at a radio station, the head of the music department in a school, the co-ordinator of the musical ensembles in a university or college , the head bandmaster of a military band, the head...
of the Bavarian State Opera and Bavarian State Orchestra. He was succeeded by Kent Nagano
Kent Nagano
__FORCETOC__Kent George Nagano is an American conductor and opera administrator. He is currently the music director of the Orchestre Symphonique de Montréal and the Bavarian State Opera.-Biography:...
in 2006.