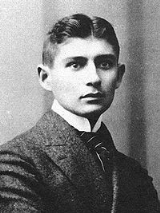 Overview
Franz Kafka was a culturally influential German-language
German language
German is a West Germanic language, related to and classified alongside English and Dutch. With an estimated 90 – 98 million native speakers, German is one of the world's major languages and is the most widely-spoken first language in the European Union....
author of short stories
Short Stories
Short Stories may refer to:*A plural for Short story*Short Stories , an American pulp magazine published from 1890-1959*Short Stories, a 1954 collection by O. E...
and novel
Novel
A novel is a book of long narrative in literary prose. The genre has historical roots both in the fields of the medieval and early modern romance and in the tradition of the novella. The latter supplied the present generic term in the late 18th century....
s. Contemporary critics and academics, including Vladimir Nabokov
Vladimir Nabokov
Vladimir Vladimirovich Nabokov was a multilingual Russian novelist and short story writer. Nabokov wrote his first nine novels in Russian, then rose to international prominence as a master English prose stylist...
, regard Kafka as one of the best writers of the 20th century
20th century in literature
See also: 20th century in poetry, 19th century in literature, other events of the 20th century, 21st century in literature, list of years in literature.Literature of the 20th century refers to world literature produced during the 20th century...
. The term "Kafkaesque" has become part of the English language.

Kafka was born to middle class German-speaking Jewish
Jews
The Jews , also known as the Jewish people, are a nation and ethnoreligious group originating in the Israelites or Hebrews of the Ancient Near East. The Jewish ethnicity, nationality, and religion are strongly interrelated, as Judaism is the traditional faith of the Jewish nation...
parents in Prague
Prague
Prague is the capital and largest city of the Czech Republic. Situated in the north-west of the country on the Vltava river, the city is home to about 1.3 million people, while its metropolitan area is estimated to have a population of over 2.3 million...
, Bohemia
Bohemia
Bohemia is a historical region in central Europe, occupying the western two-thirds of the traditional Czech Lands. It is located in the contemporary Czech Republic with its capital in Prague...
, then part of the Austro-Hungarian Empire
Austria-Hungary
Austria-Hungary , more formally known as the Kingdoms and Lands Represented in the Imperial Council and the Lands of the Holy Hungarian Crown of Saint Stephen, was a constitutional monarchic union between the crowns of the Austrian Empire and the Kingdom of Hungary in...
. The house in which he was born, on the Old Town Square
Old Town Square (Prague)
Old Town Square is a historic square in the Old Town quarter of Prague in the Czech Republic at .Located between Wenceslas Square and the Charles Bridge, Prague's Old Town Square is often bursting at the seams with tourists in the summer. Featuring various architectural styles including the...
next to Prague's Church of St Nicholas, now contains a permanent exhibition devoted to the author.

Most of Kafka's writing, including the large body of his unfinished work, was published posthumously.
Kafka was born into a middle-class Ashkenazi Jewish
Ashkenazi Jews
Ashkenazi Jews, also known as Ashkenazic Jews or Ashkenazim , are the Jews descended from the medieval Jewish communities along the Rhine in Germany from Alsace in the south to the Rhineland in the north. Ashkenaz is the medieval Hebrew name for this region and thus for Germany...
family in Prague (now the Czech Republic).

As Gregor Samsa awoke one morning from uneasy dreams he found himself transformed in his bed into a monstrous vermin.

The true way is along a rope that is not spanned high in the air, but only just above the ground. It seems intended more to cause stumbling than to be walked upon.

All human errors are impatience, the premature breaking off of what is methodical, an apparent fencing in of the apparent thing.

2; Variant translation: All human errors are impatience, a premature breaking off of methodical procedure, an apparent fencing-in of what is apparently at issue.