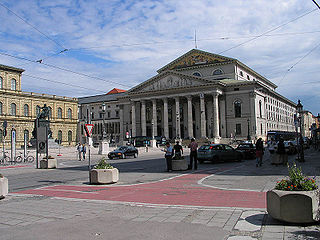 Max-Joseph-Platz is a large square in central Munich
Munich
Munich The city's motto is "" . Before 2006, it was "Weltstadt mit Herz" . Its native name, , is derived from the Old High German Munichen, meaning "by the monks' place". The city's name derives from the monks of the Benedictine order who founded the city; hence the monk depicted on the city's coat...
which was named after King Maximilian Joseph. Max-Joseph-Platz serves as the western starting point of the royal avenue Maximilianstraße
Maximilianstraße (Munich)
The neo-Renaissance Maximilianstraße in Munich is one of the city's four royal avenues. It starts at Max-Joseph-Platz, where the Residenz and the National Theatre are situated, and runs from west to east....
.

The square was constructed with the erection of the National Theatre Munich at its east side, which was opened in 1818. Opposite to its Corinthian columns
Corinthian order
The Corinthian order is one of the three principal classical orders of ancient Greek and Roman architecture. The other two are the Doric and Ionic. When classical architecture was revived during the Renaissance, two more orders were added to the canon, the Tuscan order and the Composite order...
at the west side are middle-class houses. The north side is framed by the Königsbau of the Munich Residence. King Ludwig I of Bavaria
Ludwig I of Bavaria
Ludwig I was a German king of Bavaria from 1825 until the 1848 revolutions in the German states.-Crown prince:...
instructed his architect Leo von Klenze
Leo von Klenze
Leo von Klenze was a German neoclassicist architect, painter and writer...
to build the King's tract in the south of his palace in the style of the Florentine
Florence
Florence is the capital city of the Italian region of Tuscany and of the province of Florence. It is the most populous city in Tuscany, with approximately 370,000 inhabitants, expanding to over 1.5 million in the metropolitan area....
Palazzo Pitti
Palazzo Pitti
The Palazzo Pitti , in English sometimes called the Pitti Palace, is a vast mainly Renaissance palace in Florence, Italy. It is situated on the south side of the River Arno, a short distance from the Ponte Vecchio...
. The facade of the Residenz Theatre
Residenz Theatre
The Residence Theatre or New Residence Theatre of the Residence in Munich was built from 1950 to 1951 by Karl Hocheder...
is situated between the Königsbau and the National Theatre. The south of Max-Joseph-Platz is dominated by the Neo-Renaissance arcades of the former Palais Toerring-Jettenbach, a rococo mansion which originates from 1747.

After World War II a subterranean garage was constructed below the Max-Joseph-Platz, its gateway disturbs the neo-classical appearance of the square.