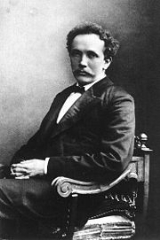 Overview
Richard Georg Strauss was a leading German composer of the late Romantic
Romantic music
Romantic music or music in the Romantic Period is a musicological and artistic term referring to a particular period, theory, compositional practice, and canon in Western music history, from 1810 to 1900....
and early modern eras. He is known for his operas, which include Der Rosenkavalier
Der Rosenkavalier
Der Rosenkavalier is a comic opera in three acts by Richard Strauss to an original German libretto by Hugo von Hofmannsthal. It is loosely adapted from the novel Les amours du chevalier de Faublas by Louvet de Couvrai and Molière’s comedy Monsieur de Pourceaugnac...
and Salome
Salome (opera)
Salome is an opera in one act by Richard Strauss to a German libretto by the composer, based on Hedwig Lachmann’s German translation of the French play Salomé by Oscar Wilde. Strauss dedicated the opera to his friend Sir Edgar Speyer....
; his Lied
Lied
is a German word literally meaning "song", usually used to describe romantic songs setting German poems of reasonably high literary aspirations, especially during the nineteenth century, beginning with Carl Loewe, Heinrich Marschner, and Franz Schubert and culminating with Hugo Wolf...
er, especially his Four Last Songs
Four Last Songs
The Four Last Songs for soprano and orchestra were the final completed works of Richard Strauss, composed in 1948 when the composer was 84. Strauss did not live to hear the premiere, given at the Royal Albert Hall in London on 22 May 1950 by the soprano Kirsten Flagstad accompanied by the...
; and his tone poems and orchestral works, such as Death and Transfiguration, Till Eulenspiegel's Merry Pranks, Also sprach Zarathustra
Also sprach Zarathustra (Richard Strauss)
Also sprach Zarathustra, Op. 30 is a tone poem by Richard Strauss, composed in 1896 and inspired by Friedrich Nietzsche's philosophical treatise of the same name. The composer conducted its first performance on 27 November 1896 in Frankfurt...
, An Alpine Symphony, and Metamorphosen
Metamorphosen
Metamorphosen, Study for 23 Solo Strings, subtitled "In memoriam", is a composition by Richard Strauss, scored for ten violins, five violas, five cellos, and three double basses. It was composed during the closing months of the Second World War, from August 1944 to March 1945. Strauss dedicated it...
. Strauss was also a prominent conductor throughout Germany and Austria.

Strauss, along with Gustav Mahler
Gustav Mahler
Gustav Mahler was a late-Romantic Austrian composer and one of the leading conductors of his generation. He was born in the village of Kalischt, Bohemia, in what was then Austria-Hungary, now Kaliště in the Czech Republic...
, represents the late flowering of German Romanticism
German Romanticism
For the general context, see Romanticism.In the philosophy, art, and culture of German-speaking countries, German Romanticism was the dominant movement of the late 18th and early 19th centuries. German Romanticism developed relatively late compared to its English counterpart, coinciding in its...
after Richard Wagner
Richard Wagner
Wilhelm Richard Wagner was a German composer, conductor, theatre director, philosopher, music theorist, poet, essayist and writer primarily known for his operas...
, in which pioneering subtleties of orchestration are combined with an advanced harmonic style.
Strauss was born on 11 June 1864, in Munich
Munich
Munich The city's motto is "" . Before 2006, it was "Weltstadt mit Herz" . Its native name, , is derived from the Old High German Munichen, meaning "by the monks' place". The city's name derives from the monks of the Benedictine order who founded the city; hence the monk depicted on the city's coat...
, the son of Franz Strauss
Franz Strauss
Franz Joseph Strauss was a German musician. He was a composer, a virtuoso horn player and accomplished performer on the guitar, clarinet and viola...
, who was the principal horn
Horn (instrument)
The horn is a brass instrument consisting of about of tubing wrapped into a coil with a flared bell. A musician who plays the horn is called a horn player ....
player at the Court Opera in Munich.

What are his places of resedint
More
x