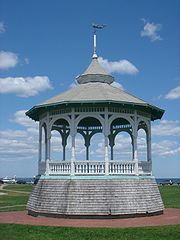 A bandstand is a circular or semicircular structure set in a park
Park
A park is a protected area, in its natural or semi-natural state, or planted, and set aside for human recreation and enjoyment, or for the protection of wildlife or natural habitats. It may consist of rocks, soil, water, flora and fauna and grass areas. Many parks are legally protected by...
, garden
Garden
A garden is a planned space, usually outdoors, set aside for the display, cultivation, and enjoyment of plants and other forms of nature. The garden can incorporate both natural and man-made materials. The most common form today is known as a residential garden, but the term garden has...
, pier
Pier
A pier is a raised structure, including bridge and building supports and walkways, over water, typically supported by widely spread piles or pillars...
, or indoor space, designed to accommodate musical bands performing concert
Concert
A concert is a live performance before an audience. The performance may be by a single musician, sometimes then called a recital, or by a musical ensemble, such as an orchestra, a choir, or a musical band...
s. A simple construction, it both creates an ornamental focal point and also serves acoustic requirements
Acoustics
Acoustics is the interdisciplinary science that deals with the study of all mechanical waves in gases, liquids, and solids including vibration, sound, ultrasound and infrasound. A scientist who works in the field of acoustics is an acoustician while someone working in the field of acoustics...
while providing shelter for the changeable weather, if outdoors.

Many bandstands in the United Kingdom
United Kingdom
The United Kingdom of Great Britain and Northern IrelandIn the United Kingdom and Dependencies, other languages have been officially recognised as legitimate autochthonous languages under the European Charter for Regional or Minority Languages...
originated in the Victorian era
Victorian era
The Victorian era of British history was the period of Queen Victoria's reign from 20 June 1837 until her death on 22 January 1901. It was a long period of peace, prosperity, refined sensibilities and national self-confidence...
as the British brass band
Brass band
A brass band is a musical ensemble generally consisting entirely of brass instruments, most often with a percussion section. Ensembles that include brass and woodwind instruments can in certain traditions also be termed brass bands , but are usually more correctly termed military bands, concert...
movement gained popularity. Smaller bandstands are often not much more than gazebo
Gazebo
A gazebo is a pavilion structure, sometimes octagonal, that may be built, in parks, gardens, and spacious public areas. Gazebos are freestanding or attached to a garden wall, roofed, and open on all sides; they provide shade, shelter, ornamental features in a landscape, and a place to rest...
s. Much larger bandstands such as that at the Hollywood Bowl
Hollywood Bowl
The Hollywood Bowl is a modern amphitheater in the Hollywood area of Los Angeles, California, United States that is used primarily for music performances...
may be called bandshells and usually take a shape similar to a quarter sphere.

A good example of a semi-circular bandstand is the Eastbourne Bandstand
Eastbourne Bandstand
The Eastbourne Bandstand is a bandstand on the seafront of the East Sussex coastal town of Eastbourne. The current bandstand was built in 1935, with its unique semi-circular design and blue domed roof; there is no other in the United Kingdom...
, built in 1935 to replace a circular bandstand that stood on cast iron stilts. Herne Bay, Kent
Herne Bay, Kent
Herne Bay is a seaside town in Kent, South East England, with a population of 35,188. On the south coast of the Thames Estuary, it is north of Canterbury and east of Whitstable. It neighbours the ancient villages of Herne and Reculver and is part of the City of Canterbury local government district...
contains a totally enclosed bandstand with a stage and cafe area, topped with copper
Copper
Copper is a chemical element with the symbol Cu and atomic number 29. It is a ductile metal with very high thermal and electrical conductivity. Pure copper is soft and malleable; an exposed surface has a reddish-orange tarnish...
-clad domes.

There is a very old bandstand at Horsham's Carfax, built in 1892 by Walter Macfarlane & Co at the Saracen Foundry
Saracen Foundry
The Saracen Foundry was the better known name for the Possilpark, Glasgow based foundry company W MacFarlane & Co. Ltd, founded and owned by Walter MacFarlane. Macfarlane's was the most important manufacturer of ornamental ironwork in Scotland....
in Glasgow, and another one in its adjacent park. It was moved slightly from its original location, to better accommodate pedestrians and then refurbished in 1978 with funds raised by the Horsham Society and with council funding. In 1992, the original design was rediscovered in museum archives and it was then restored to its original colour scheme.

In Scotland
Scotland's many ironwork
Ironwork
Ironwork is any weapon, artwork, utensil or architectural feature made of iron especially used for decoration. There are two main types of ironwork wrought iron and cast iron. While the use of iron dates as far back as 4000BC, it was the Hittites who first knew how to extract it and develop weapons...
foundries and manufacturers have built bandstands throughout the United Kingdom
United Kingdom
The United Kingdom of Great Britain and Northern IrelandIn the United Kingdom and Dependencies, other languages have been officially recognised as legitimate autochthonous languages under the European Charter for Regional or Minority Languages...
.

One of the most recent bandstands erected in the UK was the Langholm Town Bandstand. A very contemporary, modern design.

Some of the many other notable bandstands in Scotland itself include those located at:


In arts, entertainment, and literature

The function of the bandstand inspired the names of: