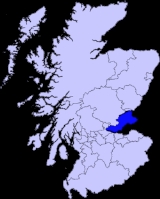 Overview
Fife (ˈfəif; ) is a council area
Council Area
A Council Area is one of the areas defined in Schedule 1 of the Local Government etc. Act 1994 and is under the control of one of the local authorities in Scotland created by that Act.-Legislation :1889...
and former county of Scotland
Scotland
Scotland is a country that is part of the United Kingdom. Occupying the northern third of the island of Great Britain, it shares a border with England to the south and is bounded by the North Sea to the east, the Atlantic Ocean to the north and west, and the North Channel and Irish Sea to the...
. It is situated between the Firth of Tay
Firth of Tay
The Firth of Tay is a firth in Scotland between the council areas of Fife, Perth and Kinross, the City of Dundee and Angus, into which Scotland's largest river in terms of flow, the River Tay, empties....
and the Firth of Forth
Firth of Forth
The Firth of Forth is the estuary or firth of Scotland's River Forth, where it flows into the North Sea, between Fife to the north, and West Lothian, the City of Edinburgh and East Lothian to the south...
, with inland boundaries to Perth and Kinross
Perth and Kinross
Perth and Kinross is one of 32 council areas in Scotland, and a Lieutenancy Area. It borders onto the Aberdeenshire, Angus, Dundee City, Fife, Clackmannanshire, Stirling, Argyll and Bute and Highland council areas. Perth is the administrative centre...
and Clackmannanshire
Clackmannanshire
Clackmannanshire, often abbreviated to Clacks is a local government council area in Scotland, and a lieutenancy area, bordering Perth and Kinross, Stirling and Fife.As Scotland's smallest historic county, it is often nicknamed 'The Wee County'....
. It was originally one of the Pictish
Picts
The Picts were a group of Late Iron Age and Early Mediaeval people living in what is now eastern and northern Scotland. There is an association with the distribution of brochs, place names beginning 'Pit-', for instance Pitlochry, and Pictish stones. They are recorded from before the Roman conquest...
kingdoms
Monarchy
A monarchy is a form of government in which the office of head of state is usually held until death or abdication and is often hereditary and includes a royal house. In some cases, the monarch is elected...
, known as Fib, and is still commonly known as the Kingdom of Fife within Scotland.

It is a lieutenancy area
Lieutenancy areas of Scotland
The lieutenancy areas of Scotland are the areas used for the ceremonial lord-lieutenants, the monarch's representatives, in Scotland. They are different from the local government council areas, the committee areas, the sheriffdoms, the registration counties, the former regions and districts, the...
, and was a county of Scotland until 1975. It was very occasionally known by the anglicisation
Anglicisation
Anglicisation, or anglicization , is the process of converting verbal or written elements of any other language into a form that is more comprehensible to an English speaker, or, more generally, of altering something such that it becomes English in form or character.The term most often refers to...
Fifeshire in old documents and maps compiled by English
England
England is a country that is part of the United Kingdom. It shares land borders with Scotland to the north and Wales to the west; the Irish Sea is to the north west, the Celtic Sea to the south west, with the North Sea to the east and the English Channel to the south separating it from continental...
cartographers and authors.

What is the population of oakley?
More
x