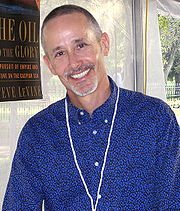 Steven Saylor is an American
United States
The United States of America is a federal constitutional republic comprising fifty states and a federal district...
author
Author
An author is broadly defined as "the person who originates or gives existence to anything" and that authorship determines responsibility for what is created. Narrowly defined, an author is the originator of any written work.-Legal significance:...
of historical novel
Historical novel
According to Encyclopædia Britannica, a historical novel is-Development:An early example of historical prose fiction is Luó Guànzhōng's 14th century Romance of the Three Kingdoms, which covers one of the most important periods of Chinese history and left a lasting impact on Chinese culture.The...
s. He is a graduate of the University of Texas at Austin
University of Texas at Austin
The University of Texas at Austin is a state research university located in Austin, Texas, USA, and is the flagship institution of the The University of Texas System. Founded in 1883, its campus is located approximately from the Texas State Capitol in Austin...
, where he studied history
History
History is the discovery, collection, organization, and presentation of information about past events. History can also mean the period of time after writing was invented. Scholars who write about history are called historians...
and Classics
Classics
Classics is the branch of the Humanities comprising the languages, literature, philosophy, history, art, archaeology and other culture of the ancient Mediterranean world ; especially Ancient Greece and Ancient Rome during Classical Antiquity Classics (sometimes encompassing Classical Studies or...
.

Although he also has written novels about Texas
Texas
Texas is the second largest U.S. state by both area and population, and the largest state by area in the contiguous United States.The name, based on the Caddo word "Tejas" meaning "friends" or "allies", was applied by the Spanish to the Caddo themselves and to the region of their settlement in...
history, Saylor's best-known work is his Roma Sub Rosa
Roma Sub Rosa
Roma Sub Rosa is the title of the series of mystery novels by Steven Saylor set in, and populated by, noteworthy denizens of ancient Rome. The series is noted for its historical authenticity. The phrase "Roma Sub Rosa" means, in Latin, "Rome under the rose"...
series, set in ancient Rome. The novels' hero is a detective named Gordianus the Finder
Gordianus the Finder
Gordianus the Finder is the fictional protagonist of Steven Saylor's Roma Sub Rosa series of mystery novels set in Republican Rome. He lives by his wits, investigating crimes and other cases for Roman advocates such as Marcus Tullius Cicero...
, active during the time of Sulla
Lucius Cornelius Sulla
Lucius Cornelius Sulla Felix , known commonly as Sulla, was a Roman general and statesman. He had the rare distinction of holding the office of consul twice, as well as that of dictator...
, Cicero
Cicero
Marcus Tullius Cicero , was a Roman philosopher, statesman, lawyer, political theorist, and Roman constitutionalist. He came from a wealthy municipal family of the equestrian order, and is widely considered one of Rome's greatest orators and prose stylists.He introduced the Romans to the chief...
, Julius Caesar
Julius Caesar
Gaius Julius Caesar was a Roman general and statesman and a distinguished writer of Latin prose. He played a critical role in the gradual transformation of the Roman Republic into the Roman Empire....
, and Cleopatra
Cleopatra VII of Egypt
Cleopatra VII Philopator was the last pharaoh of Ancient Egypt.She was a member of the Ptolemaic dynasty, a family of Greek origin that ruled Egypt after Alexander the Great's death during the Hellenistic period...
.

Prior to his novel-writing career, he published gay erotic fiction under the pen name Aaron Travis. Saylor has lived with his partner Richard Solomon since 1976 and they officially registered as domestic partners
Domestic partnership
A domestic partnership is a legal or personal relationship between two individuals who live together and share a common domestic life but are neither joined by marriage nor a civil union...
in San Francisco in 1991. The couple split their time between properties in Berkeley, California
Berkeley, California
Berkeley is a city on the east shore of the San Francisco Bay in Northern California, United States. Its neighbors to the south are the cities of Oakland and Emeryville. To the north is the city of Albany and the unincorporated community of Kensington...
, and Austin, Texas
Austin, Texas
Austin is the capital city of the U.S. state of :Texas and the seat of Travis County. Located in Central Texas on the eastern edge of the American Southwest, it is the fourth-largest city in Texas and the 14th most populous city in the United States. It was the third-fastest-growing large city in...
.


Published under his own name: