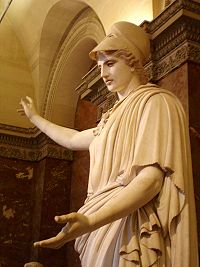 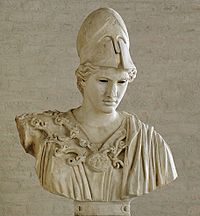 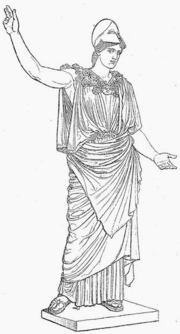 The Athena of Velletri or Velletri Pallas is a type of classical
Classical sculpture
Classical sculpture refers to the forms of sculpture from Ancient Greece and Ancient Rome, as well as the Hellenized and Romanized civilizations under their rule or influence from about 500 BC to fall of Rome in AD 476. It also refers stylistically to modern sculptures done in a classical style....
marble
Marble
Marble is a metamorphic rock composed of recrystallized carbonate minerals, most commonly calcite or dolomite.Geologists use the term "marble" to refer to metamorphosed limestone; however stonemasons use the term more broadly to encompass unmetamorphosed limestone.Marble is commonly used for...
statue
Statue
A statue is a sculpture in the round representing a person or persons, an animal, an idea or an event, normally full-length, as opposed to a bust, and at least close to life-size, or larger...
of Athena
Athena
In Greek mythology, Athena, Athenê, or Athene , also referred to as Pallas Athena/Athene , is the goddess of wisdom, courage, inspiration, civilization, warfare, strength, strategy, the arts, crafts, justice, and skill. Minerva, Athena's Roman incarnation, embodies similar attributes. Athena is...
, wearing a helmet
Helmet
A helmet is a form of protective gear worn on the head to protect it from injuries.Ceremonial or symbolic helmets without protective function are sometimes used. The oldest known use of helmets was by Assyrian soldiers in 900BC, who wore thick leather or bronze helmets to protect the head from...
.

All statues of this type are 1st century Roman
Ancient Rome
Ancient Rome was a thriving civilization that grew on the Italian Peninsula as early as the 8th century BC. Located along the Mediterranean Sea and centered on the city of Rome, it expanded to one of the largest empires in the ancient world....
copies of a lost Greek
Ancient Greece
Ancient Greece is a civilization belonging to a period of Greek history that lasted from the Archaic period of the 8th to 6th centuries BC to the end of antiquity. Immediately following this period was the beginning of the Early Middle Ages and the Byzantine era. Included in Ancient Greece is the...
bronze
Bronze
Bronze is a metal alloy consisting primarily of copper, usually with tin as the main additive. It is hard and brittle, and it was particularly significant in antiquity, so much so that the Bronze Age was named after the metal...
, possibly a bronze of c. 430 BC by Kresilas
Kresilas
Kresilas was a Greek sculptor from Kydonia. He lived in the 5th century BC. He worked in Athens at the time of the Peloponnesian war, as a follower of the idealistic portraiture of Myron.-Pericles statue:...
. The oval face and the sharpness of the eyebrow ridge, nose and eyes mirror those of the bust of the helmeted Pericles
Pericles
Pericles was a prominent and influential statesman, orator, and general of Athens during the city's Golden Age—specifically, the time between the Persian and Peloponnesian wars...
at British Museum
British Museum
The British Museum is a museum of human history and culture in London. Its collections, which number more than seven million objects, are amongst the largest and most comprehensive in the world and originate from all continents, illustrating and documenting the story of human culture from its...
.http://www.britishmuseum.org/explore/highlights/highlight_objects/gr/m/marble_portrait_bust_perikles.aspx That bust is identified with the statue of Pericles that Pliny the Elder (Natural History, XXXIV, 25) attributes to Kresilas and that Pausanias
Pausanias (geographer)
Pausanias was a Greek traveler and geographer of the 2nd century AD, who lived in the times of Hadrian, Antoninus Pius and Marcus Aurelius. He is famous for his Description of Greece , a lengthy work that describes ancient Greece from firsthand observations, and is a crucial link between classical...
(I, 28, 2) records as sited on the acropolis in the 2nd century. This parallel gives us a date and author for this bronze Athena.

This replaces an old identification of the type's original with the cult statue
Cult image
In the practice of religion, a cult image is a human-made object that is venerated for the deity, spirit or daemon that it embodies or represents...
by Alcamenes
Alcamenes
Alcamenes was an ancient Greek sculptor of Lemnos and Athens. He was a younger contemporary of Phidias and noted for the delicacy and finish of his works, among which a Hephaestus and an Aphrodite "of the Gardens" were conspicuous.Pausanias says Alcamenes was an ancient Greek sculptor of Lemnos and...
in the Temple of Hephaestus
Temple of Hephaestus
The Temple of Hephaestus, also known as the Hephaisteion or earlier as the Theseion, is the best-preserved ancient Greek temple; it remains standing largely as built. It is a Doric peripteral temple, and is located at the north-west side of the Agora of Athens, on top of the Agoraios Kolonos hill....
on the Athenian agora
Ancient Agora of Athens
The Ancient Agora of Athens is the best-known example of an ancient Greek agora, located to the northwest of the Acropolis and is bounded on the south by the hill of the Areopagus and on the west by the hill known as the Colonus Agoraeus.-History:The agora in Athens had private housing, until it...
. This identification is also unlikely judging by the statue's extreme height.

Plaster casts of the sculpture (probably taken from the original) have been found in excavations of a Roman copyist's workshop at Baiae
Baiae
Baiae , a frazione of the comune of Bacoli) in the Campania region of Italy was a Roman seaside resort on the Bay of Naples. It was said to have been named after Baius, who was supposedly buried there. Baiae was for several hundred years a fashionable resort, especially towards the end of the Roman...
, and these casts show that Kresilas's bronze was of the same dimensions as the Louvre copy.

Many ancient copies of the bronze have been found (and the Baiae find suggests industrial-scale production of them), but the most famous is the 3.05 m (10 ft) high example found in the ruins of a Roman villa
Roman villa
A Roman villa is a villa that was built or lived in during the Roman republic and the Roman Empire. A villa was originally a Roman country house built for the upper class...
in a vineyard near Velletri
Velletri
Velletri is an Italian town of 53,298 inhabitants. It is a comune in the province of Rome, on the Alban Hills, in Lazio - Italy. It is bounded by other communes of Rocca di Papa, Lariano, Cisterna di Latina, Artena, Aprilia, Nemi, Genzano di Roma, Lanuvio...
in 1797. This example is now in the Louvre
Louvre
The Musée du Louvre – in English, the Louvre Museum or simply the Louvre – is one of the world's largest museums, the most visited art museum in the world and a historic monument. A central landmark of Paris, it is located on the Right Bank of the Seine in the 1st arrondissement...
, with Accession number is Ma 464 (MR 281), but is not currently on display. It has traces of red colour in the hair and around the eyes and mouth, a preparatory layer for a full polychromatic scheme.

Upon rediscovery, it was purchased by Vincenzo Pacetti
Vincenzo Pacetti
Vincenzo Pacetti was an Italian sculptor and restorer from Castel Bolognese, particularly active in collecting and freely restoring and completing classical sculptures such as the Barberini Faun — his most famous work— the Hope Dionysus and the Athena of Velletri and...
, who added the peak of the helmet, the straight forearm, the hands, the feet, the snakes, and a section of the cloak, and polished the overall surface. He then sold it to the French Directory
French Directory
The Directory was a body of five Directors that held executive power in France following the Convention and preceding the Consulate...
, which transported it to Rome, where it was soon seized by Neapolitan
Naples
Naples is a city in Southern Italy, situated on the country's west coast by the Gulf of Naples. Lying between two notable volcanic regions, Mount Vesuvius and the Phlegraean Fields, it is the capital of the region of Campania and of the province of Naples...
armies when they briefly held the city from November to December 1798 during the opening stages of the War of the Second Coalition
War of the Second Coalition
The "Second Coalition" was the second attempt by European monarchs, led by the Habsburg Monarchy of Austria and the Russian Empire, to contain or eliminate Revolutionary France. They formed a new alliance and attempted to roll back France's previous military conquests...
. France then regained it in the Treaty of Florence
Treaty of Florence
The Treaty of Florence was signed on March 28, 1801 between France and the Kingdom of Naples. Naples ceded some central Italian possessions, the island of Elba, and the Athena of Velletri to France. French garrisons were imposed in several Italian towns, and Neapolitan harbours were closed to...
(28 March 1801), and it was displayed at the Louvre
Louvre
The Musée du Louvre – in English, the Louvre Museum or simply the Louvre – is one of the world's largest museums, the most visited art museum in the world and a historic monument. A central landmark of Paris, it is located on the Right Bank of the Seine in the 1st arrondissement...
from December 1803 onwards.