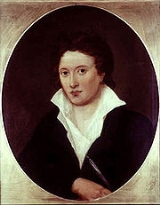 Overview
Percy Bysshe Shelley was one of the major English Romantic poets and is critically regarded as among the finest lyric poets
Lyric poetry
Lyric poetry is a genre of poetry that expresses personal and emotional feelings. In the ancient world, lyric poems were those which were sung to the lyre. Lyric poems do not have to rhyme, and today do not need to be set to music or a beat...
in the English language
English language
English is a West Germanic language that arose in the Anglo-Saxon kingdoms of England and spread into what was to become south-east Scotland under the influence of the Anglian medieval kingdom of Northumbria...
. Shelley was famous for his association with John Keats
John Keats
John Keats was an English Romantic poet. Along with Lord Byron and Percy Bysshe Shelley, he was one of the key figures in the second generation of the Romantic movement, despite the fact that his work had been in publication for only four years before his death.Although his poems were not...
and Lord Byron. The novelist Mary Shelley
Mary Shelley
Mary Shelley was a British novelist, short story writer, dramatist, essayist, biographer, and travel writer, best known for her Gothic novel Frankenstein: or, The Modern Prometheus . She also edited and promoted the works of her husband, the Romantic poet and philosopher Percy Bysshe Shelley...
was his second wife.

You would not easily guessAll the modes of distressWhich torture the tenants of earth;And the various evils,Which like so many devils,Attend the poor souls from their birth.

Cease, cease, wayward Mortal! I dare not unveilThe shadows that float o’er Eternity’s vale;Nought waits for the good but a spirit of Love,That will hail their blest advent to regions above.For Love, Mortal, gleams through the gloom of my sway,And the shades which surround me fly fast at its ray.

Dar’st thou amid the varied To live alone, an isolated thing?

Not the swart Pariah in some Indian grove,Lone, lean, and hunted by his brother’s hate,Hath drunk so deep the cup of bitter fateAs that poor wretch who cannot, cannot love:He bears a load which nothing can remove,A killing, withering weight.

Sweet the rose which lives in Heaven,Although on earth ’tis planted,Where its honours blow,While by earth’s slaves the leaves are rivenWhich die the while they glow.

Here I swear, and as I break my oath may Infinity Eternity blast me, here I swear that never will I forgive Christianity! It is the only point on which I allow myself to encourage revenge... Oh, how I wish I were the Antichrist, that it were mine to crush the Demon, to hurl him to his native Hell never to rise again — I expect to gratify some of this insatiable feeling in Poetry.

I think that the leaf of a tree, the meanest insect on wh. we trample are in themselves arguments more conclusive than any which can be adduced that some vast intellect animates Infinity.

GOVERNMENT has no rights; it is a delegation from several individuals for the purpose of securing their own. It is therefore just, only so far as it exists by their consent, useful only so far as it operates to their well-being.

No man has a right to disturb the public peace, by personally resisting the execution of a law however bad. He ought to acquiesce, using at the same time the utmost powers of his reason, to promote its repeal.