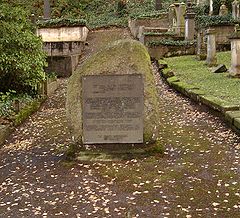 Arnsberg is a town in the Hochsauerland
Hochsauerland
Hochsauerlandkreis is a Kreis in the east of North Rhine-Westphalia, Germany. Neighboring districts are Soest, Paderborn, Höxter, Waldeck-Frankenberg, Siegen-Wittgenstein, Olpe, Märkischer Kreis.- History :...
district, in North Rhine-Westphalia
North Rhine-Westphalia
North Rhine-Westphalia is the most populous state of Germany, with four of the country's ten largest cities. The state was formed in 1946 as a merger of the northern Rhineland and Westphalia, both formerly part of Prussia. Its capital is Düsseldorf. The state is currently run by a coalition of the...
, Germany
Germany
Germany , officially the Federal Republic of Germany , is a federal parliamentary republic in Europe. The country consists of 16 states while the capital and largest city is Berlin. Germany covers an area of 357,021 km2 and has a largely temperate seasonal climate...
. It is the location of the Regierungsbezirk
Regierungsbezirk
In Germany, a Government District, in German: Regierungsbezirk – is a subdivision of certain federal states .They are above the Kreise, Landkreise, and kreisfreie Städte...
Arnsberg
Arnsberg (region)
Arnsberg is one of the five Regierungsbezirke of North Rhine-Westphalia, Germany, located in the south-east of the country. It covers the Sauerland hills as well as the east part of the Ruhr area....
's administration and one of the three local administration offices of the Hochsauerlandkreis.

Arnsberg is located in the north-east of the Sauerland
Sauerland
The Sauerland is a rural, hilly area spreading across most of the south-eastern part of North Rhine-Westphalia, in parts heavily forested and, apart from the major valleys, sparsely inhabited...
in the Ruhr river valley. The river Ruhr makes a sinuosity in the south of the old town of the old city of Arnsberg.
The town is nearly completely encircled by forrest, and in the north there is the natural park "Arnsberger Wald".
The main road to reach Arnsberg is the Federal Motorway 46. It connects Arnsberg to Brilon
Brilon
Brilon is a town in North Rhine-Westphalia, Germany, that belongs to the Hochsauerlandkreis.- Geography :Brilon is situated on the Brilon Heights at an altitude of about 450 m on the upper reaches of the river Möhne...
in the east and (using the Federal Motorway 445
Bundesautobahn 445
is an Autobahn in Germany.It begins in Werl and ends to the Bundesautobahn 46 near Arnsberg. The government of Germany is planning to expand it from Werl to Hamm, where it is supposed to end up in the Bundesautobahn 2...
) Werl
Werl
Werl is a town located in the district of Soest in North Rhine-Westphalia, Germany.-Geography:Werl is easily accessible because it is located between the Sauerland, Münsterland, and the Ruhr Area...
in the west.
The city spans a distance of up to 13 kilometres (8.1 mi) from the southern to the northern limits. 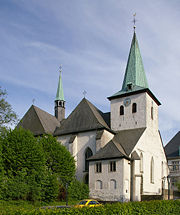 Arnsberg was first mentioned in 789 in the Carolingian records (Urbar) as part of the abbey of Werden.
Arnsberg was built by the counts of Werl
Werl
Werl is a town located in the district of Soest in North Rhine-Westphalia, Germany.-Geography:Werl is easily accessible because it is located between the Sauerland, Münsterland, and the Ruhr Area...
in the 11th century. They built a castle there whose remains can still be visited and are occasionally used for public celebrations. It was completely destroyed in the Seven years war
Seven Years' War
The Seven Years' War was a global military war between 1756 and 1763, involving most of the great powers of the time and affecting Europe, North America, Central America, the West African coast, India, and the Philippines...
in 1769.

In the 12th century, old Arnsberg became the seat of Westphalia
Westphalia
Westphalia is a region in Germany, centred on the cities of Arnsberg, Bielefeld, Dortmund, Minden and Münster.Westphalia is roughly the region between the rivers Rhine and Weser, located north and south of the Ruhr River. No exact definition of borders can be given, because the name "Westphalia"...
n jurisdiction (whose coat of arms is up to the present still used by the Hochsauerlandkreis). Later, the city lost its independence and belonged to the Cologne
Cologne
Cologne is Germany's fourth-largest city , and is the largest city both in the Germany Federal State of North Rhine-Westphalia and within the Rhine-Ruhr Metropolitan Area, one of the major European metropolitan areas with more than ten million inhabitants.Cologne is located on both sides of the...
area when their archbishops reigned the area. In 1816, it came under Prussia
Prussia
Prussia was a German kingdom and historic state originating out of the Duchy of Prussia and the Margraviate of Brandenburg. For centuries, the House of Hohenzollern ruled Prussia, successfully expanding its size by way of an unusually well-organized and effective army. Prussia shaped the history...
n rule and was made a local administrative centre.

The current city of Arnsberg was created in 1975 by merging 14 cities and municipalities into one city. Old Arnsberg itself and Neheim-Hüsten are the two urban parts, while the other parts are very rural. Neheim and Hüsten had been merged in 1941.

In the Second World War
World War II
World War II, or the Second World War , was a global conflict lasting from 1939 to 1945, involving most of the world's nations—including all of the great powers—eventually forming two opposing military alliances: the Allies and the Axis...
, Arnsberg first suffered widespread destruction and catastrophic loss of lives when British bombardment breached the dam of the Möhnesee
Möhnesee
Möhnesee is a municipality in the district of Soest, in North Rhine-Westphalia, Germany.-Geography:The Möhnesee municipality is situated around the Möhne Reservoir , approx...
reservoir in the night from 16 to 17 May 1943 (Operation Chastise
Operation Chastise
Operation Chastise was an attack on German dams carried out on 16–17 May 1943 by Royal Air Force No. 617 Squadron, subsequently known as the "Dambusters", using a specially developed "bouncing bomb" invented and developed by Barnes Wallis...
). The nearby Abbey Himmelpforten was completely washed away.

Later, dozens of Arnsberg citizens were killed in several British air raids
Strategic bombing
Strategic bombing is a military strategy used in a total war with the goal of defeating an enemy nation-state by destroying its economic ability and public will to wage war rather than destroying its land or naval forces...
aimed at destroying the railway viaduct
Viaduct
A viaduct is a bridge composed of several small spans. The term viaduct is derived from the Latin via for road and ducere to lead something. However, the Ancient Romans did not use that term per se; it is a modern derivation from an analogy with aqueduct. Like the Roman aqueducts, many early...
. The targets were finally destroyed on March 19, 1945 using a Grand Slam bomb
Grand Slam bomb
The Grand Slam was a 22,000 lb earthquake bomb used by RAF Bomber Command against strategic targets during the Second World War.Known officially as the Bomb, Medium Capacity, 22,000 lb, it was a scaled up version of the Tallboy bomb and closer to the original size that the bombs' inventor,...
.

Also see: Möhne Reservoir
Möhne Reservoir
The Möhne Reservoir is an artificial lake in North Rhine-Westphalia, some 45 km east of Dortmund. The dam was built between 1908 and 1913 to help control floods, regulate water levels on the Ruhr river downstream, and generate hydropower. Today, the lake is also a tourist attraction...
.

After the local government reforms of 1975 Arnsberg consists of 15 districts:

Arnsberg's population is mostly Roman Catholic
Roman Catholic Church
The Catholic Church, also known as the Roman Catholic Church, is the world's largest Christian church, with over a billion members. Led by the Pope, it defines its mission as spreading the gospel of Jesus Christ, administering the sacraments and exercising charity...
. Catholic churches include the "Probsteikirche" or the "Heilig-Kreuz Kirche"; a Protestant churches
Protestantism
Protestantism is one of the three major groupings within Christianity. It is a movement that began in Germany in the early 16th century as a reaction against medieval Roman Catholic doctrines and practices, especially in regards to salvation, justification, and ecclesiology.The doctrines of the...
is the "Auferstehungskirche". Minor religious groups include a New Apostolic
New Apostolic Church
The New Apostolic Church is a chiliastic church, converted to Protestantism as a free church from the Catholic Apostolic Church. The church has existed since 1879 in Germany and since 1897 in the Netherlands...
congregation. Cemeteries are mostly Catholic but there is also a Jewish
Judaism
Judaism ) is the "religion, philosophy, and way of life" of the Jewish people...
one.

The arms of the city depict a white eagle on a blue field. Earlier it was a white eagle on a red field, used by the counts of Arnsberg and for the first time used by the city in 1278. In the 17th century the red was changed to blue, reflecting the Bavaria
Bavaria
Bavaria, formally the Free State of Bavaria is a state of Germany, located in the southeast of Germany. With an area of , it is the largest state by area, forming almost 20% of the total land area of Germany...
n blue of the House of Wittelsbach.

Arnsberg is twinned
Town twinning
Twin towns and sister cities are two of many terms used to describe the cooperative agreements between towns, cities, and even counties in geographically and politically distinct areas to promote cultural and commercial ties.- Terminology :...
with: Alba Iulia
Alba Iulia
Alba Iulia is a city in Alba County, Transylvania, Romania with a population of 66,747, located on the Mureş River. Since the High Middle Ages, the city has been the seat of Transylvania's Roman Catholic diocese. Between 1541 and 1690 it was the capital of the Principality of Transylvania...
, Romania
Romania
Romania is a country located at the crossroads of Central and Southeastern Europe, on the Lower Danube, within and outside the Carpathian arch, bordering on the Black Sea...
Deventer
Deventer
Deventer is a municipality and city in the Salland region of the Dutch province of Overijssel. Deventer is largely situated on the east bank of the river IJssel, but also has a small part of its territory on the west bank. In 2005 the municipality of Bathmen Deventer is a municipality and city in...
, Netherlands
Netherlands
The Netherlands is a constituent country of the Kingdom of the Netherlands, located mainly in North-West Europe and with several islands in the Caribbean. Mainland Netherlands borders the North Sea to the north and west, Belgium to the south, and Germany to the east, and shares maritime borders...
Fos-sur-Mer
Fos-sur-Mer
Fos-sur-Mer is a commune in the Bouches-du-Rhône department in southern France.-Geography:Fos-sur-Mer is situated about north west of Marseille, on the Mediterranean coast, and to the west of the Étang de Berre. The city has of sand beach.-Population:...
, France
France
The French Republic , The French Republic , The French Republic , (commonly known as France , is a unitary semi-presidential republic in Western Europe with several overseas territories and islands located on other continents and in the Indian, Pacific, and Atlantic oceans. Metropolitan France...
London Borough of Bexley
London Borough of Bexley
The London Borough of Bexley lies in south east Greater London, and is a borough referred to as part of Outer London. It has common borders with the London Borough of Bromley to the south, the London Borough of Greenwich to the west, across the River Thames to the north it borders the London...
, United Kingdom
United Kingdom
The United Kingdom of Great Britain and Northern IrelandIn the United Kingdom and Dependencies, other languages have been officially recognised as legitimate autochthonous languages under the European Charter for Regional or Minority Languages...
Olesno
Olesno
Olesno is a town in Opole Voivodship, Poland about north-east of the city of Opole. It is the capital of Olesno County and seat of the Gmina Olesno.-History:The area near the ancient Amber Road had been settled since the Neolithic era...
, Poland
Poland
Poland , officially the Republic of Poland , is a country in Central Europe bordered by Germany to the west; the Czech Republic and Slovakia to the south; Ukraine, Belarus and Lithuania to the east; and the Baltic Sea and Kaliningrad Oblast, a Russian exclave, to the north...