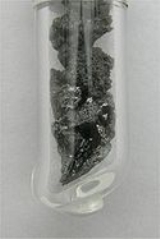 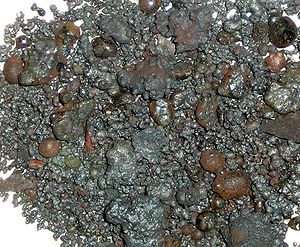 Elemental boron
Boron
Boron is the chemical element with atomic number 5 and the chemical symbol B. Boron is a metalloid. Because boron is not produced by stellar nucleosynthesis, it is a low-abundance element in both the solar system and the Earth's crust. However, boron is concentrated on Earth by the...
can exist in several allotropes
Allotropy
Allotropy or allotropism is the property of some chemical elements to exist in two or more different forms, known as allotropes of these elements...
, the most common of which are crystalline boron and brown amorphous boron. Crystalline boron has four major polymorphs
Polymorphism (materials science)
Polymorphism in materials science is the ability of a solid material to exist in more than one form or crystal structure. Polymorphism can potentially be found in any crystalline material including polymers, minerals, and metals, and is related to allotropy, which refers to chemical elements...
: α, β, γ and T. Whereas the β phase is most stable and others are metastable, the transformation rate is negligible at room temperature, and thus all those phases can exist at ambient conditions.

Crystalline boron is a very hard (Vickers hardness comparable to that of cubic boron nitride
Boron nitride
Boron nitride is a chemical compound with chemical formula BN, consisting of equal numbers of boron and nitrogen atoms. BN is isoelectronic to a similarly structured carbon lattice and thus exists in various crystalline forms...
), black, diamagnetic material with a melting point of 2080 °C. Pure elemental boron is difficult to extract. The earliest methods involved reduction of boric oxide with metals such as magnesium
Magnesium
Magnesium is a chemical element with the symbol Mg, atomic number 12, and common oxidation number +2. It is an alkaline earth metal and the eighth most abundant element in the Earth's crust and ninth in the known universe as a whole...
or aluminum. However the product is almost always contaminated with metal boride
Boride
In chemistry a boride is a chemical compound between boron and a less electronegative element, for example silicon boride . The borides are a very large group of compounds that are generally high melting and are not ionic in nature. Some borides exhibit very useful physical properties. The term...
s. Pure boron can be prepared by reducing volatile boron halides with hydrogen
Hydrogen
Hydrogen is the chemical element with atomic number 1. It is represented by the symbol H. With an average atomic weight of , hydrogen is the lightest and most abundant chemical element, constituting roughly 75% of the Universe's chemical elemental mass. Stars in the main sequence are mainly...
at high temperatures. Very pure boron, for the use in semiconductor industry, is produced by the decomposition of diborane
Diborane
Diborane is the chemical compound consisting of boron and hydrogen with the formula B2H6. It is a colorless gas at room temperature with a repulsively sweet odor. Diborane mixes well with air, easily forming explosive mixtures. Diborane will ignite spontaneously in moist air at room temperature...
at high temperatures and then further purified with the zone melting
Zone melting
Zone melting is a group of similar methods of purifying crystals, in which a narrow region of a crystal is molten, and this molten zone is moved along the crystal...
or Czochralski process
Czochralski process
The Czochralski process is a method of crystal growth used to obtain single crystals of semiconductors , metals , salts, and synthetic gemstones...
es. Even more difficult is to prepare pure single crystals of pure boron phases, because of polymorphism, reactivity of boron with impurities, etc.; typical crystal size is ~0.1 mm.

α-rhombohedral boron has a unit cell of twelve boron atoms. The structure consists of B12 icosahedra in which each boron atom has five nearest neighbors within the icosahedron. If the bonding were the conventional covalent type then each boron would have donated 5 electrons. However, boron has only 3 valence electrons, and it is thought that the bonding in the B12 icosahedra is achieved by the so-called 3-center electron-deficient bonds where the electron charge is accumulated at the center of a triangle formed by 3 adjacent atoms.

The isolated B12 icosahedra are not stable; thus boron is not a molecular solid, but the icosahedra in it are connected by strong covalent bonds.

β-rhombohedral boron has a subcell containing 105–108 atoms — or a unit cell of 320 atoms. Many atoms form B12 icosahedra, but there are also a large number of non-icosahedral atoms as well. For long time, it was unclear whether the α or β phase is most stable at ambient conditions; however, gradually a consensus was reached that β phase as the thermodynamically stable allotrope.

The γ-phase can be described as a NaCl-type arrangement of two types of clusters, B12 icosahedra and B2 pairs. It can be produced by compressing other boron phases to 12–20 GPa, heating to 1500–1800 0C and is quench
Quench
In materials science, quenching is the rapid cooling of a workpiece to obtain certain material properties. It prevents low-temperature processes, such as phase transformations, from occurring by only providing a narrow window of time in which the reaction is both thermodynamically favorable and...
able to ambient conditions. There is evidence of significant charge transfer from B2 pairs to the B12 icosahedra in this structure; in particular, lattice dynamics suggests the presence of significant long-range electrostatic interactions.

Two tetragonal phases have been reported, T-50 (or α-tetragonal boron) and T-192 (or ß-tetragonal boron) with 50 and 192 atoms in the unit cell, respectively. Whereas T-50 has been assigned to a compound (nitride (B50N2) or carbide (B50C2)), T-192 is a genuine pure boron phase. It was produced in 1960 by hydrogen reduction of BBr3 on hot tungsten
Tungsten
Tungsten , also known as wolfram , is a chemical element with the chemical symbol W and atomic number 74.A hard, rare metal under standard conditions when uncombined, tungsten is found naturally on Earth only in chemical compounds. It was identified as a new element in 1781, and first isolated as...
, rhenium
Rhenium
Rhenium is a chemical element with the symbol Re and atomic number 75. It is a silvery-white, heavy, third-row transition metal in group 7 of the periodic table. With an average concentration of 1 part per billion , rhenium is one of the rarest elements in the Earth's crust. The free element has...
or tantalum
Tantalum
Tantalum is a chemical element with the symbol Ta and atomic number 73. Previously known as tantalium, the name comes from Tantalus, a character in Greek mythology. Tantalum is a rare, hard, blue-gray, lustrous transition metal that is highly corrosion resistant. It is part of the refractory...
filaments at temperatures 1270–1550 °C (i.e. chemical vapor deposition
Chemical vapor deposition
Chemical vapor deposition is a chemical process used to produce high-purity, high-performance solid materials. The process is often used in the semiconductor industry to produce thin films. In a typical CVD process, the wafer is exposed to one or more volatile precursors, which react and/or...
). Further studies have reproduced the synthesis and confirmed the absence of impurities in this phase.

Compressing boron above 160 GPa produces a boron phase with an as yet unknown structure. Contrary to other phases, which are semiconductor
Semiconductor
A semiconductor is a material with electrical conductivity due to electron flow intermediate in magnitude between that of a conductor and an insulator. This means a conductivity roughly in the range of 103 to 10−8 siemens per centimeter...
s, this phase is a metal
Metal
A metal , is an element, compound, or alloy that is a good conductor of both electricity and heat. Metals are usually malleable and shiny, that is they reflect most of incident light...
and becomes a superconductor with a critical temperature increasing from 4 K at 160 GPa to 11 K at 250 GPa. This structural transformation occurs at pressures at which theory predicts the icosahedra to dissociate.

Amorphous boron contains B12 regular icosahedra
Icosahedron
In geometry, an icosahedron is a regular polyhedron with 20 identical equilateral triangular faces, 30 edges and 12 vertices. It is one of the five Platonic solids....
that are randomly bonded to each other without long range order. Pure amorphous boron can be produced by thermal decomposition of diborane
Diborane
Diborane is the chemical compound consisting of boron and hydrogen with the formula B2H6. It is a colorless gas at room temperature with a repulsively sweet odor. Diborane mixes well with air, easily forming explosive mixtures. Diborane will ignite spontaneously in moist air at room temperature...
at temperatures below 1000 °C. Annealing at 1000 °C converts amorphous boron to β-rhombohedral boron. Amorphous boron nanowires (30–60 nm thick) or fibers can be produced by magnetron sputtering and laser
Laser
A laser is a device that emits light through a process of optical amplification based on the stimulated emission of photons. The term "laser" originated as an acronym for Light Amplification by Stimulated Emission of Radiation...
-assisted chemical vapor deposition
Chemical vapor deposition
Chemical vapor deposition is a chemical process used to produce high-purity, high-performance solid materials. The process is often used in the semiconductor industry to produce thin films. In a typical CVD process, the wafer is exposed to one or more volatile precursors, which react and/or...
, respectively; and they also convert to β-rhombohedral boron nanowires upon annealing at 1000 °C.
The source of this article is wikipedia, the free encyclopedia.  The text of this article is licensed under the GFDL.