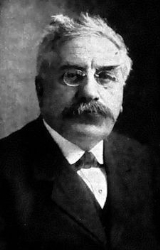 Encyclopedia
Alexandre Millerand was a French socialist
Socialism
Socialism is an economic system characterized by social ownership of the means of production and cooperative management of the economy; or a political philosophy advocating such a system. "Social ownership" may refer to any one of, or a combination of, the following: cooperative enterprises,...
politician
Politician
A politician, political leader, or political figure is an individual who is involved in influencing public policy and decision making...
. He was President of France from 23 September 1920 to 11 June 1924 and Prime Minister of France
Prime Minister of France
The Prime Minister of France in the Fifth Republic is the head of government and of the Council of Ministers of France. The head of state is the President of the French Republic...
20 January to 23 September 1920. His participation in Waldeck-Rousseau's cabinet at the turn of the 20th century, alongside the marquis de Galliffet who had directed the repression of the 1871 Paris Commune
Paris Commune
The Paris Commune was a government that briefly ruled Paris from March 18 to May 28, 1871. It existed before the split between anarchists and Marxists had taken place, and it is hailed by both groups as the first assumption of power by the working class during the Industrial Revolution...
, sparked a debate in the French Section of the Workers' International (SFIO) and in the Second International
Second International
The Second International , the original Socialist International, was an organization of socialist and labour parties formed in Paris on July 14, 1889. At the Paris meeting delegations from 20 countries participated...
about the participation of socialists in "bourgeois governments".

Born in Paris, he was educated for the Bar, and made his reputation by his defence, in company with Georges Laguerre
Jean Henri Georges Laguerre
Jean Henri Georges Laguerre was a French lawyer and politician.Born in Paris, he was called to the bar in 1879 and distinguished himself by brilliant pleadings in favour of socialist and anarchist leaders, defending Prince Kropotkine at Lyon in 1883, Louise Michel in the same year...
, of Ernest Roche and Duc-Quercy, the instigators of the strike
Strike action
Strike action, also called labour strike, on strike, greve , or simply strike, is a work stoppage caused by the mass refusal of employees to work. A strike usually takes place in response to employee grievances. Strikes became important during the industrial revolution, when mass labour became...
at Decazeville
Decazeville
Decazeville is a commune in the Aveyron department in the Midi-Pyrénées region in southern France.The commune was created in the 19th century because of the Industrial Revolution and was named after the Duke of Decazes , the founder of the factory that created the town.-History:The town is built...
in 1883; he then took Laguerre's place on Georges Clemenceau
Georges Clemenceau
Georges Benjamin Clemenceau was a French statesman, physician and journalist. He served as the Prime Minister of France from 1906 to 1909, and again from 1917 to 1920. For nearly the final year of World War I he led France, and was one of the major voices behind the Treaty of Versailles at the...
's paper, La Justice. He was elected to the Chamber of Deputies for the Seine
Seine (département)
Seine was a département of France encompassing Paris and its immediate suburbs. Its préfecture was Paris and its official number was 75. The Seine département was abolished in 1968 and its territory divided among four new départements....
département in 1885 as a Radical Socialist. He was associated with Clemenceau and Camille Pelletan
Camille Pelletan
Charles Camille Pelletan was a French politician and journalist, Minister of Marine in Emile Combes' Bloc des gauches cabinet from 1902 to 1905...
as an arbitrator in the Carmaux
Carmaux
Carmaux is a commune in the Tarn department in southern France.Carmaux was famous for its important coal mining and its glassworks . "In 1892, Jean Jaurès supported the miners of Carmaux when they went on strike over the dismissal of their leader, Jean Baptiste Calvignac."...
strike (1892). He had long had the ear of the Chamber in matters of social legislation, and after the Panama scandals had discredited so many politicians his influence grew.


As member of the executive

He was chief of the Socialist faction (the Parti Socialiste de France in 1899), a group which then mustered sixty members, and edited until 1896 their organ in the press, La Petite République. His programme included the collective ownership of the means of production
Means of production
Means of production refers to physical, non-human inputs used in production—the factories, machines, and tools used to produce wealth — along with both infrastructural capital and natural capital. This includes the classical factors of production minus financial capital and minus human capital...
and the international association of labour, but, when in June 1899 he entered Pierre Waldeck-Rousseau's cabinet of "republican defence" as Minister of Commerce, he limited himself to practical reforms, devoting his attention to the improvement of the mercantile marine, to the development of trade, of technical education, of the postal system, and to the amelioration of the conditions of labour. Labour questions were entrusted to a separate department, the Direction du Travail, and the pension and insurance office was also raised to the status of a "direction".

As labour minister, Millerand was responsible for the introduction of a wide range of reforms, including the reduction in the maximum workday from 11 to 10 hours in 1904, the introduction of an 8-hour workday for postal employees, the prescribing of maximum hours and minimum wages for all work undertaken by public authorities, the bringing of worker’s representatives into the Conseil supérieur de travail, the establishment of arbitration tribunals and inspectors of labour, and the creation of a labour section inside his Ministry of commerce to tackle the problem of social insurance.

The introduction of trade union
Trade union
A trade union, trades union or labor union is an organization of workers that have banded together to achieve common goals such as better working conditions. The trade union, through its leadership, bargains with the employer on behalf of union members and negotiates labour contracts with...
representatives on the Supreme Labour Council, the organization of local labour councils, and the instructions to factory inspectors to put themselves in communication with the councils of the trade unions, were valuable concessions to labour, and he further secured the rigorous application of earlier laws devised for the protection of the working class
Working class
Working class is a term used in the social sciences and in ordinary conversation to describe those employed in lower tier jobs , often extending to those in unemployment or otherwise possessing below-average incomes...
. His name was especially associated with a project for the establishment of old age pensions
Pension
In general, a pension is an arrangement to provide people with an income when they are no longer earning a regular income from employment. Pensions should not be confused with severance pay; the former is paid in regular installments, while the latter is paid in one lump sum.The terms retirement...
, which became law in 1905. In 1898, he became editor of La Lanterne.

His influence with the far left
Far left
Far left, also known as the revolutionary left, radical left and extreme left are terms which refer to the highest degree of leftist positions among left-wing politics...
had already declined, for it was said that his departure from the true Marxist
Marxism
Marxism is an economic and sociopolitical worldview and method of socioeconomic inquiry that centers upon a materialist interpretation of history, a dialectical view of social change, and an analysis and critique of the development of capitalism. Marxism was pioneered in the early to mid 19th...
tradition had disintegrated the party. He was expelled from the group in 1903, and continued to move to the right, being appointed Prime Minister by the conservative
Conservatism
Conservatism is a political and social philosophy that promotes the maintenance of traditional institutions and supports, at the most, minimal and gradual change in society. Some conservatives seek to preserve things as they are, emphasizing stability and continuity, while others oppose modernism...
President Paul Deschanel
Paul Deschanel
Paul Eugène Louis Deschanel was a French statesman. He served as President of France from 18 February 1920 to 21 September 1920.-Biography:...
in 1920. 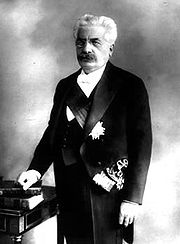 When Deschanel had to resign later that year due to his mental disorder, Millerand emerged as a compromise candidate for President between the Bloc National
National Bloc (France)
The National Bloc was a center-right coalition in France which was in power from 1919 to 1924.- Elections of 1919 :Made up primarily of conservative right wing parties, such as the Fédération républicaine, Alliance démocratique, and Action libérale, the coalition had the support of various radical...
and the remnants of the Bloc des gauches
Bloc des gauches
The Bloc des gauches , aka Bloc républicain was a coalition of Republican political forces created during the French Third Republic in 1899 to contest the 1902 legislative elections...
. Millerand appointed Georges Leygues
Georges Leygues
Georges Leygues was a French politician of the Third Republic. During his time as Minister of Marine he worked with the navy's chief of staff Henri Salaun in unsuccessful attempts to gain naval re-armament priority for government funding over army rearmament such as the Maginot Line.He was born...
, a politician with a long career of ministerial office, as Prime Minister and attempted to strengthen the executive powers of the Presidency. This move was resisted in the Chamber of Deputies and the French Senate
French Senate
The Senate is the upper house of the Parliament of France, presided over by a president.The Senate enjoys less prominence than the lower house, the directly elected National Assembly; debates in the Senate tend to be less tense and generally enjoy less media coverage.-History:France's first...
, and Millerand was forced to appoint a stronger figure, Aristide Briand
Aristide Briand
Aristide Briand was a French statesman who served eleven terms as Prime Minister of France during the French Third Republic and received the 1926 Nobel Peace Prize.- Early life :...
. Briand's appointment was welcomed by both left and right, although the Socialists and the left wing of the Radical Party did not join his government. However, Millerand dismissed Briand after just a year, and appointed the conservative republican Raymond Poincaré
Raymond Poincaré
Raymond Poincaré was a French statesman who served as Prime Minister of France on five separate occasions and as President of France from 1913 to 1920. Poincaré was a conservative leader primarily committed to political and social stability...
.

Millerand was accused of favouring conservatives in spite of the traditional neutrality of French Presidents and the composition of the legislature. On 14 July 1922, Millerand escaped an assassination attempt by Gustave Bouvet
Gustave Bouvet
Gustave Charles Bouvet was a French anarchist who unsuccessfully tried to assassinate Alexandre Millerand, the President of France.Bouvet was raised by priests in Antwerp, and returned at 14 years of age to Paris to live with his parents...
, a young French anarchist
Anarchism
Anarchism is generally defined as the political philosophy which holds the state to be undesirable, unnecessary, and harmful, or alternatively as opposing authority in the conduct of human relations...
. Two years later, Millerand resigned in the face of growing conflict between the elected legislature and the office of the President, following the victory of the Cartel des Gauches
Cartel des Gauches
The Cartel des gauches was the name of the governmental alliance between the Radical-Socialist Party and the socialist French Section of the Workers' International after World War I , which lasted until the end of the Popular Front . The Cartel des gauches twice won general elections, in 1924 and...
. Gaston Doumergue
Gaston Doumergue
Pierre-Paul-Henri-Gaston Doumergue was a French politician of the Third Republic.Doumergue came from a Protestant family. Beginning as a Radical, he turned more towards the political right in his old age. He served as Prime Minister from 9 December 1913 to 2 June 1914...
, who was the president of the Senate at the time, was chosen to replace Millerand.

Alexandre Millerand died in 1943 at Versailles, and was interred in the Passy Cemetery.