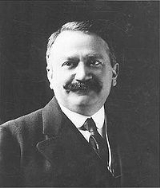 Encyclopedia
Pierre-Paul-Henri-Gaston Doumergue (ɡastɔ̃ dumɛʁɡ; Aigues-Vives, Gard
Gard
Gard is a département located in southern France in the Languedoc-Roussillon region.The department is named after the River Gard, although the formerly Occitan name of the River Gard, Gardon, has been replacing the traditional French name in recent decades, even among French speakers.- History...
, 1 August 1863 18 June 1937 in Aigues-Vives) was a French politician of the Third Republic
French Third Republic
The French Third Republic was the republican government of France from 1870, when the Second French Empire collapsed due to the French defeat in the Franco-Prussian War, to 1940, when France was overrun by Nazi Germany during World War II, resulting in the German and Italian occupations of France...
.

Doumergue came from a Protestant family. Beginning as a Radical, he turned more towards the political right in his old age. He served as Prime Minister from 9 December 1913 to 2 June 1914. He held the portfolio for the colonies
Minister of Overseas France
The Minister of Overseas France is a cabinet member in the Government of France responsible for overseeing French overseas departments and territories .The position is currently held by Brice Hortefeux, who is also the Minister of the Interior...
through the ministries of Viviani and Briand
Aristide Briand
Aristide Briand was a French statesman who served eleven terms as Prime Minister of France during the French Third Republic and received the 1926 Nobel Peace Prize.- Early life :...
until the Ribot
Alexandre Ribot
Alexandre-Félix-Joseph Ribot was a French politician, four times Prime Minister.-Biography:He was born in Saint-Omer, Pas-de-Calais.After a brilliant academic career at the University of Paris, where he was lauréat of the faculty of law, he rapidly made his mark at the bar...
ministry of March, 1917, when he was sent to Russia
Russia
Russia or , officially known as both Russia and the Russian Federation , is a country in northern Eurasia. It is a federal semi-presidential republic, comprising 83 federal subjects...
to persuade the Kerensky
Alexander Kerensky
Alexander Fyodorovich Kerensky was a major political leader before and during the Russian Revolutions of 1917.Kerensky served as the second Prime Minister of the Russian Provisional Government until Vladimir Lenin was elected by the All-Russian Congress of Soviets following the October Revolution...
government not to make a separate peace with Germany and Austria
Austria
Austria , officially the Republic of Austria , is a landlocked country of roughly 8.4 million people in Central Europe. It is bordered by the Czech Republic and Germany to the north, Slovakia and Hungary to the east, Slovenia and Italy to the south, and Switzerland and Liechtenstein to the...
. He was elected the twelfth President
President of the French Republic
The President of the French Republic colloquially referred to in English as the President of France, is France's elected Head of State....
of France on 13 June 1924, the only Protestant
Protestantism
Protestantism is one of the three major groupings within Christianity. It is a movement that began in Germany in the early 16th century as a reaction against medieval Roman Catholic doctrines and practices, especially in regards to salvation, justification, and ecclesiology.The doctrines of the...
to hold that office. He served until 13 June 1931, and again was Prime Minister in a conservative national unity government, following the riots of 6 February 1934
6 February 1934 crisis
The 6 February 1934 crisis refers to an anti-parliamentarist street demonstration in Paris organized by far-right leagues that culminated in a riot on the Place de la Concorde, near the seat of the French National Assembly...
. This government lasted from 6 February to 8 November 1934.