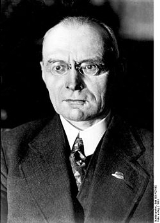 Encyclopedia
Alexander Ernst Alfred Hermann Freiherr von Falkenhausen (October 29, 1878 – July 31, 1966) was a German
Germany
Germany , officially the Federal Republic of Germany , is a federal parliamentary republic in Europe. The country consists of 16 states while the capital and largest city is Berlin. Germany covers an area of 357,021 km2 and has a largely temperate seasonal climate...
general. He was the head of the military government of Belgium
Belgium
Belgium , officially the Kingdom of Belgium, is a federal state in Western Europe. It is a founding member of the European Union and hosts the EU's headquarters, and those of several other major international organisations such as NATO.Belgium is also a member of, or affiliated to, many...
from 1940–44 during its occupation by Germany in World War II
World War II
World War II, or the Second World War , was a global conflict lasting from 1939 to 1945, involving most of the world's nations—including all of the great powers—eventually forming two opposing military alliances: the Allies and the Axis...
.

He is related to Ludwig von Falkenhausen
Ludwig von Falkenhausen
Ludwig Freiherr von Falkenhausen was a German general most notable for his activities during World War I.- Biography :Falkenhausen was born in Guben. His parents were the Prussian Lieutenant-General D...
, who was the governor-general
Governor-General
A Governor-General, is a vice-regal person of a monarch in an independent realm or a major colonial circonscription. Depending on the political arrangement of the territory, a Governor General can be a governor of high rank, or a principal governor ranking above "ordinary" governors.- Current uses...
of Belgium
Belgium
Belgium , officially the Kingdom of Belgium, is a federal state in Western Europe. It is a founding member of the European Union and hosts the EU's headquarters, and those of several other major international organisations such as NATO.Belgium is also a member of, or affiliated to, many...
during the German occupation, from 1917 until 1918, during the First World War
World War I
World War I , which was predominantly called the World War or the Great War from its occurrence until 1939, and the First World War or World War I thereafter, was a major war centred in Europe that began on 28 July 1914 and lasted until 11 November 1918...
, and a direct male line descendant of Karl Wilhelm Friedrich, Margrave of Brandenburg-Ansbach
Karl Wilhelm Friedrich, Margrave of Brandenburg-Ansbach
Charles William Frederick , nicknamed the Wild Markgrave, was Margrave of the Principality of Ansbach from 1729 to his death.- Life :...
, by his mistress
Mistress (lover)
A mistress is a long-term female lover and companion who is not married to her partner; the term is used especially when her partner is married. The relationship generally is stable and at least semi-permanent; however, the couple does not live together openly. Also the relationship is usually,...
Elisabeth Wünsch.

In his youth, Alexander already showed interest in Eastern Asia and its culture. He travelled and studied in Japan, Northern China, Korea and Indochina for a few years (1909–1911).

Falkenhausen was commissioned as a second lieutenant in the German Army in 1897 and served as a military attaché in Japan
Japan
Japan is an island nation in East Asia. Located in the Pacific Ocean, it lies to the east of the Sea of Japan, China, North Korea, South Korea and Russia, stretching from the Sea of Okhotsk in the north to the East China Sea and Taiwan in the south...
prior to the First World War. He was awarded the Pour le Mérite
Pour le Mérite
The Pour le Mérite, known informally as the Blue Max , was the Kingdom of Prussia's highest military order for German soldiers until the end of World War I....
during the war while serving with the Ottoman
Ottoman Empire
The Ottoman EmpireIt was usually referred to as the "Ottoman Empire", the "Turkish Empire", the "Ottoman Caliphate" or more commonly "Turkey" by its contemporaries...
Army in Palestine
Palestine
Palestine is a conventional name, among others, used to describe the geographic region between the Mediterranean Sea and the Jordan River, and various adjoining lands....
. After the war he stayed in service and later headed the Dresden Infantry School in 1927.

In 1930, von Falkenhausen retired from service and went to China to serve as Chiang Kai-Shek
Chiang Kai-shek
Chiang Kai-shek was a political and military leader of 20th century China. He is known as Jiǎng Jièshí or Jiǎng Zhōngzhèng in Mandarin....
's military advisor in 1934. In 1937 Nazi Germany
Nazi Germany
Nazi Germany , also known as the Third Reich , but officially called German Reich from 1933 to 1943 and Greater German Reich from 26 June 1943 onward, is the name commonly used to refer to the state of Germany from 1933 to 1945, when it was a totalitarian dictatorship ruled by...
officially allied themselves with the Empire of Japan
Empire of Japan
The Empire of Japan is the name of the state of Japan that existed from the Meiji Restoration on 3 January 1868 to the enactment of the post-World War II Constitution of...
, whom by then had launched a war against the Republic of China
Republic of China
The Republic of China , commonly known as Taiwan , is a unitary sovereign state located in East Asia. Originally based in mainland China, the Republic of China currently governs the island of Taiwan , which forms over 99% of its current territory, as well as Penghu, Kinmen, Matsu and other minor...
during the Second Sino-Japanese War
Second Sino-Japanese War
The Second Sino-Japanese War was a military conflict fought primarily between the Republic of China and the Empire of Japan. From 1937 to 1941, China fought Japan with some economic help from Germany , the Soviet Union and the United States...
. The Nazi party, as a goodwill gesture to Japan recognized the Japanese puppet state of Manchukuo
Manchukuo
Manchukuo or Manshū-koku was a puppet state in Manchuria and eastern Inner Mongolia, governed under a form of constitutional monarchy. The region was the historical homeland of the Manchus, who founded the Qing Empire in China...
and withdrew German support to China, including forcing Falkenhausen to resign his advisor post by threatening to have his family back in Germany punished for treachery. After a brief goodbye dinner party with Chiang Kai-Shek's family, Falkenhausen promised to Chiang Kai-Shek that he would never reveal any battle plans he had taught him to the Japanese.

According to some sources (especially from Communist Chinese during late 1930s), Falkenhausen still kept contact with Chiang Kai-Shek after his return to Germany and would occasionally send him European luxury items and food to the Chiang household and his officers.

Recalled to active duty in 1938, he served as an infantry general on the Western Front until his appointment as military governor for Belgium in May 1940. While serving as military governor his administration published 17 decrees against the Jewish population of Belgium as preparatory measures leading in June 1942 to the Final Solution and the deportation of 28,900 Jews.

His deputy for economic affairs, Eggert Reeder
Eggert Reeder
SS-Gruppenführer Eggert Reeder was a German jurist, civil servant, and district President of several regions...
was responsible for the destruction of "Jewish influence" in the Belgian economy, leading to mass unemployment of Jewish workers, especially in the diamond business. Some 2250 of these unemployed were thus sent to forced labour camps in Northern France in order to build the Atlantic Wall for the TODT organisation. Some 43,000 non-Jewish Belgians were also deported to German camps of which 13,000 died. Hundreds of resistance fighters were shot by the German army during the occupation.


Involvement in the conspiracy against Hitler

Von Falkenhausen was a close friend of two anti-Hitler conspirators, Carl Friedrich Goerdeler
Carl Friedrich Goerdeler
Carl Friedrich Goerdeler was a monarchist conservative German politician, executive, economist, civil servant and opponent of the Nazi regime...
and Field Marshal Erwin von Witzleben
Erwin von Witzleben
Job-Wilhelm Georg Erdmann Erwin von Witzleben was a German army officer and in the Second World War an Army commander and a conspirator in the July 20 Plot.-Early years:...
, and soon came to detest Adolf Hitler
Adolf Hitler
Adolf Hitler was an Austrian-born German politician and the leader of the National Socialist German Workers Party , commonly referred to as the Nazi Party). He was Chancellor of Germany from 1933 to 1945, and head of state from 1934 to 1945...
and the Nazi
Nazism
Nazism, the common short form name of National Socialism was the ideology and practice of the Nazi Party and of Nazi Germany...
regime, offering his support to von Witzleben for a planned coup d'état. After the failure of the July 20 Plot
July 20 Plot
On 20 July 1944, an attempt was made to assassinate Adolf Hitler, Führer of the Third Reich, inside his Wolf's Lair field headquarters near Rastenburg, East Prussia. The plot was the culmination of the efforts of several groups in the German Resistance to overthrow the Nazi-led German government...
in 1944, von Falkenhausen spent the rest of the war transferred from one concentration camp to another. In late April 1945 he was transferred to Tyrol
Transport of concentration camp inmates to Tyrol
The Transport of Inmates of German Concentration Camps to Tyrol happened in late April 1945 and led to the only time such prisoners were liberated by German troops.- Transfer and liberation:...
together with about 140 other prominent inmates of the Dachau concentration camp, where the SS left the prisoners behind. He was liberated by the Fifth U.S. Army on May 5, 1945.

Falkenhausen and Reeder were both sent to Belgium for trial in 1948, where they were held in jail.

Placed on trial in Brussels
Brussels
Brussels , officially the Brussels Region or Brussels-Capital Region , is the capital of Belgium and the de facto capital of the European Union...
from 9 March 1951 and defended by lawyer Ernst Achenbach
Ernst Achenbach
Ernst Achenbach was a German lawyer and politician of the Nazi Party, and after World War II, the Free Democratic Party.-Life and work:...
(1909–1991), they were tried for their role in the deportation of more than 30,000 Jews from Belgium, and not for their deaths in Auschwitz. During his trial, von Falkenhausen was vouched for by a Chinese woman named Qian Xiuling who was living in Belgium, who together with various Belgian Jews provided copious evidence that both men had tried to save Belgian and Jewish lives. They were both found guilty on 9 July, and sentenced to 12 years hard labour in Germany. But on return to West Germany
West Germany
West Germany is the common English, but not official, name for the Federal Republic of Germany or FRG in the period between its creation in May 1949 to German reunification on 3 October 1990....
, having served one third of their sentence as required by Belgian law, on 30 July they were pardoned by Chancellor Konrad Adenauer
Konrad Adenauer
Konrad Hermann Joseph Adenauer was a German statesman. He was the chancellor of the West Germany from 1949 to 1963. He is widely recognised as a person who led his country from the ruins of World War II to a powerful and prosperous nation that had forged close relations with old enemies France,...
(1876–1967).