Encyclopedia
Nassau is a town located in the German
Germany
Germany , officially the Federal Republic of Germany , is a federal parliamentary republic in Europe. The country consists of 16 states while the capital and largest city is Berlin. Germany covers an area of 357,021 km2 and has a largely temperate seasonal climate...
Land
States of Germany
Germany is made up of sixteen which are partly sovereign constituent states of the Federal Republic of Germany. Land literally translates as "country", and constitutionally speaking, they are constituent countries...
(State) of Rhineland-Palatinate
Rhineland-Palatinate
Rhineland-Palatinate is one of the 16 states of the Federal Republic of Germany. It has an area of and about four million inhabitants. The capital is Mainz. English speakers also commonly refer to the state by its German name, Rheinland-Pfalz ....
. It lies in the Lahn River valley between the cities of Bad Ems
Bad Ems
Bad Ems is a town in Rhineland-Palatinate, Germany. It is the county seat of the Rhein-Lahn rural district and is well known as a bathing resort on the river Lahn...
and Limburg an der Lahn
Limburg an der Lahn
Limburg an der Lahn is the district seat of Limburg-Weilburg in Hesse, Germany.-Location:Limburg lies in western Hesse between the Taunus and the Westerwald on the river Lahn....
. Nassau is the seat of the Verbandsgemeinde
Verbandsgemeinde
A Verbandsgemeinde is an administrative unit in the German Bundesländer of Rhineland-Palatinate and Saxony-Anhalt.-Rhineland-Palatinate:...
("collective municipality") of Nassau
Nassau (Verbandsgemeinde)
Nassau is a Verbandsgemeinde in the Rhein-Lahn-Kreis, in Rhineland-Palatinate, Germany. Its seat is in Nassau.The Verbandsgemeinde Nassau consists of the following Ortsgemeinden :...
. The town is on the German-Dutch holiday road, the Orange Route
Orange Route
The Orange Route is a holiday route, that runs from Amsterdam in the Netherlands through North and Central Germany and returns to Amsterdam. It is 2,400 kilometres long and crossess the Netherlands and nine German federal states...
. As of 2002, it had a population of 5,209.

Nassau was first mentioned as the Villa Nassova estate of the Bishopric of Worms
Bishopric of Worms
The Bishopric of Worms was an ecclesiastical principality of the Holy Roman Empire. Located on both banks of the Rhine around Worms just north of the union of that river with the Neckar, it was largely surrounded by the Palatinate. Worms had been the seat of a bishop from Roman times...
in a 915 deed. It received town privileges
Town privileges
Town privileges or city rights were important features of European towns during most of the second millennium.Judicially, a town was distinguished from the surrounding land by means of a charter from the ruling monarch that defined its privileges and laws. Common privileges were related to trading...
rights together with nearby Dausenau
Dausenau
Dausenau is a municipality in the district of Rhein-Lahn, in Rhineland-Palatinate, in western Germany.Dausenau was one of the oldest possessions of the counts of Nassau and the arms thus show the lion of Nassau. The village was granted city rights in 1348, but these west later lost again...
and Scheuern in 1348 by Emperor Charles IV. Count Dudo-Heinrich of Laurenburg
Laurenburg
Laurenburg is a municipality in the Rhein-Lahn district of Rhineland-Palatinate, in western Germany. The town, a health resort situated in the lower Lahn River valley, belongs to the Diez Municipal Association.-History:...
had the Burg Nassau
Burg Nassau
Nassau Castle, located in Nassau, Rhineland-Palatinate, Germany, was the original seat of the House of Nassau. The ruins of the castle are situated on a rock outcropping about above the Lahn River...
built about 1100 and his descendants began to call themselves the Counts of Nassau
House of Nassau
The House of Nassau is a diversified aristocratic dynasty in Europe. It is named after the lordship associated with Nassau Castle, located in present-day Nassau, Rhineland-Palatinate, Germany. The lords of Nassau were originally titled Count of Nassau, then elevated to the princely class as...
. Count Adolf of Nassau was elected King of the Romans
King of the Romans
King of the Romans was the title used by the ruler of the Holy Roman Empire following his election to the office by the princes of the Kingdom of Germany...
from 1292 until his death on 2 July, 1298. The Counts of Nassau married also into the line of the neighbouring Counts of Arnstein (Obernhof
Obernhof
Obernhof is a municipality in the district of Rhein-Lahn, in Rhineland-Palatinate, in western Germany....
/Attenhausen
Attenhausen
Attenhausen is a municipality in the district of Rhein-Lahn, in Rhineland-Palatinate, in western Germany....
), founders of the monastery at Arnstein. After the dissolution of the Holy Roman Empire
Holy Roman Empire
The Holy Roman Empire was a realm that existed from 962 to 1806 in Central Europe.It was ruled by the Holy Roman Emperor. Its character changed during the Middle Ages and the Early Modern period, when the power of the emperor gradually weakened in favour of the princes...
in 1806, the town became part of the Duchy of Nassau.

Nassau suffered heavily from bombings by American B-26 Marauders during World War II
World War II
World War II, or the Second World War , was a global conflict lasting from 1939 to 1945, involving most of the world's nations—including all of the great powers—eventually forming two opposing military alliances: the Allies and the Axis...
. It was rebuilt after the war by architect Gerhard Rauch. Despite the ancient and eventful history of this town, it currently has only slightly over 5,000 inhabitants. The town of Nassau is the original namesake of the Duchy of Nassau, the royal House of Orange-Nassau
House of Orange-Nassau
The House of Orange-Nassau , a branch of the European House of Nassau, has played a central role in the political life of the Netherlands — and at times in Europe — since William I of Orange organized the Dutch revolt against Spanish rule, which after the Eighty Years' War...
, the Prussia
Prussia
Prussia was a German kingdom and historic state originating out of the Duchy of Prussia and the Margraviate of Brandenburg. For centuries, the House of Hohenzollern ruled Prussia, successfully expanding its size by way of an unusually well-organized and effective army. Prussia shaped the history...
n province of Hessen Nassau. Its name has also spawned a multitude of other places in the Americas
Americas
The Americas, or America , are lands in the Western hemisphere, also known as the New World. In English, the plural form the Americas is often used to refer to the landmasses of North America and South America with their associated islands and regions, while the singular form America is primarily...
, such as Nassau
Nassau, Bahamas
Nassau is the capital, largest city, and commercial centre of the Commonwealth of the Bahamas. The city has a population of 248,948 , 70 percent of the entire population of The Bahamas...
, the capital city of the Bahamas
The Bahamas
The Bahamas , officially the Commonwealth of the Bahamas, is a nation consisting of 29 islands, 661 cays, and 2,387 islets . It is located in the Atlantic Ocean north of Cuba and Hispaniola , northwest of the Turks and Caicos Islands, and southeast of the United States...
, and Nassau County, New York
Nassau County, New York
Nassau County is a suburban county on Long Island, east of New York City in the U.S. state of New York, within the New York Metropolitan Area. As of the 2010 census, the population was 1,339,532...
, in the United States
United States
The United States of America is a federal constitutional republic comprising fifty states and a federal district...
. The name has also been used for ship
Ship
Since the end of the age of sail a ship has been any large buoyant marine vessel. Ships are generally distinguished from boats based on size and cargo or passenger capacity. Ships are used on lakes, seas, and rivers for a variety of activities, such as the transport of people or goods, fishing,...
s, building
Building
In architecture, construction, engineering, real estate development and technology the word building may refer to one of the following:...
s, and even a type of bet
Bet
Bet or BET may refer to:* A wager in gambling* Basic Economics Test * Bet , the second letter in many Semitic alphabets, including Aramaic, Hebrew, Phoenician and Syriac* Brunauer-Emmett-Teller isotherm. See BET_theory...
used in golf
Golf
Golf is a precision club and ball sport, in which competing players use many types of clubs to hit balls into a series of holes on a golf course using the fewest number of strokes....
.

The Counts of Nassau married also into the line of the neighbouring Counts of Arnstein (Obernhof / Attenhausen), founders of the monastery at Arnstein. 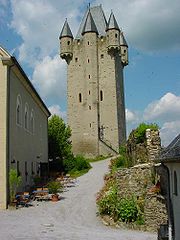 Located in Nassau, south of the Lahn River, is the Nassau Castle. It is the eponymous ancestral seat of the counts of Nassau and thus the joint ancestral castle of the Grand Dukes of Luxembourg and Dutch royal house of Nassau. In the town is the Steinische Hof, the seat of the Reichsfreiherren (Baron
Baron
Baron is a title of nobility. The word baron comes from Old French baron, itself from Old High German and Latin baro meaning " man, warrior"; it merged with cognate Old English beorn meaning "nobleman"...
s) vom und zum Stein, and birthplace of the Prussian Reformers and Minister Heinrich Friedrich Karl, Reichsfreiherr vom und zum Stein.

The Imperial Baron Heinrich Friedrich Karl vom und zum Stein, Prussian statesman and reformer, was born in Nassau on October 25, 1757. Here he wrote his famous Nassauer Memorandum of 1807. Stein descended from an ancient aristocratic dynasty, who had been residents of Nassau since the 12th century. The family estate lies in the centre of the town, called the Steinische Hof, which today is still in the possession of the descendants of the reformer, the Counts von Kanitz.