Air travel is a form of travel
Travel
Travel is the movement of people or objects between relatively distant geographical locations. 'Travel' can also include relatively short stays between successive movements.-Etymology:...
in vehicles such as airplane
Fixed-wing aircraft
A fixed-wing aircraft is an aircraft capable of flight using wings that generate lift due to the vehicle's forward airspeed. Fixed-wing aircraft are distinct from rotary-wing aircraft in which wings rotate about a fixed mast and ornithopters in which lift is generated by flapping wings.A powered...
s, helicopter
Helicopter
A helicopter is a type of rotorcraft in which lift and thrust are supplied by one or more engine-driven rotors. This allows the helicopter to take off and land vertically, to hover, and to fly forwards, backwards, and laterally...
s, hot air balloon
Hot air balloon
The hot air balloon is the oldest successful human-carrying flight technology. It is in a class of aircraft known as balloon aircraft. On November 21, 1783, in Paris, France, the first untethered manned flight was made by Jean-François Pilâtre de Rozier and François Laurent d'Arlandes in a hot air...
s, blimp
Blimp
A blimp, or non-rigid airship, is a floating airship without an internal supporting framework or keel. A non-rigid airship differs from a semi-rigid airship and a rigid airship in that it does not have any rigid structure, neither a complete framework nor a partial keel, to help the airbag...
s, glider
Glider aircraft
Glider aircraft are heavier-than-air craft that are supported in flight by the dynamic reaction of the air against their lifting surfaces, and whose free flight does not depend on an engine. Mostly these types of aircraft are intended for routine operation without engines, though engine failure can...
s, hang gliding, parachuting
Parachuting
Parachuting, also known as skydiving, is the action of exiting an aircraft and returning to earth with the aid of a parachute. It may or may not involve a certain amount of free-fall, a time during which the parachute has not been deployed and the body gradually accelerates to terminal...
or anything else that can sustain flight. 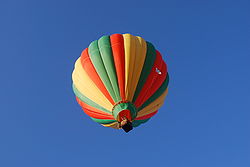 Most air travel starts and ends at a commercial airport
Airport
An airport is a location where aircraft such as fixed-wing aircraft, helicopters, and blimps take off and land. Aircraft may be stored or maintained at an airport...
. The typical procedure is check-in
Airport check-in
Airport check-in uses service counters found at commercial airports handling commercial air travel. The check-in is normally handled by an airline itself or a handling agent working on behalf of an airline...
, border control
Border control
Border controls are measures used by a country to monitor or regulate its borders.The control of the flow of many people, animals and goods across a border may be controlled by government Customs services. Security is enforced by various kinds of Border Guards and Coast Guards...
, airport security
Airport security
Airport security refers to the techniques and methods used in protecting airports and aircraft from crime.Large numbers of people pass through airports. This presents potential targets for terrorism and other forms of crime due to the number of people located in a particular location...
baggage and passenger check before entering the gate, boarding
Boarding (transport)
Boarding is a term to describe the entry of passengers onto a vehicle, usually in public transportation. Boarding starts with entering the vehicle and ends with the seating of each passenger and closure of the doors...
, flying
Flight
Flight is the process by which an object moves either through an atmosphere or beyond it by generating lift or propulsive thrust, or aerostatically using buoyancy, or by simple ballistic movement....
and pick-up of luggage and - limited to international flights - another border control at the host country's border
Border
Borders define geographic boundaries of political entities or legal jurisdictions, such as governments, sovereign states, federated states and other subnational entities. Some borders—such as a state's internal administrative borders, or inter-state borders within the Schengen Area—are open and...
.