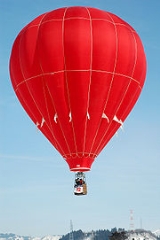 Overview
The hot air balloon is the oldest successful human-carrying flight
Flight
Flight is the process by which an object moves either through an atmosphere or beyond it by generating lift or propulsive thrust, or aerostatically using buoyancy, or by simple ballistic movement....
technology. It is in a class of aircraft known as balloon aircraft
Balloon (aircraft)
A balloon is a type of aircraft that remains aloft due to its buoyancy. A balloon travels by moving with the wind. It is distinct from an airship, which is a buoyant aircraft that can be propelled through the air in a controlled manner....
. On November 21, 1783, in Paris
Paris
Paris is the capital and largest city in France, situated on the river Seine, in northern France, at the heart of the Île-de-France region...
, France
France
The French Republic , The French Republic , The French Republic , (commonly known as France , is a unitary semi-presidential republic in Western Europe with several overseas territories and islands located on other continents and in the Indian, Pacific, and Atlantic oceans. Metropolitan France...
, the first untethered manned flight was made by Jean-François Pilâtre de Rozier and François Laurent d'Arlandes
François Laurent d'Arlandes
François Laurent le Vieux d'Arlandes was a French marquis, soldier and a pioneer of hot air ballooning. He and Jean-François Pilâtre de Rozier made the first manned free balloon flight on 21 November 1783, in a Montgolfier balloon....
in a hot air balloon created on December 14, 1782 by the Montgolfier brothers
Montgolfier brothers
Joseph-Michel Montgolfier and Jacques-Étienne Montgolfier were the inventors of the montgolfière-style hot air balloon, globe aérostatique. The brothers succeeded in launching the first manned ascent, carrying Étienne into the sky...
. Hot air balloons that can be propelled through the air rather than just being pushed along by the wind
Wind
Wind is the flow of gases on a large scale. On Earth, wind consists of the bulk movement of air. In outer space, solar wind is the movement of gases or charged particles from the sun through space, while planetary wind is the outgassing of light chemical elements from a planet's atmosphere into space...
are known as airship
Airship
An airship or dirigible is a type of aerostat or "lighter-than-air aircraft" that can be steered and propelled through the air using rudders and propellers or other thrust mechanisms...
s or, more specifically, thermal airship
Thermal airship
A thermal airship is an airship that generates its lift via the difference in density due to a temperature differential between the gas inside its envelope and the ambient air. Currently all thermal airships use hot air, as used in a hot air balloon, as their lifting gas...
s.

A hot air balloon consists of a bag called the envelope
Aerostat
An aerostat is a craft that remains aloft primarily through the use of buoyant lighter than air gases, which impart lift to a vehicle with nearly the same overall density as air. Aerostats include free balloons, airships, and moored balloons...
that is capable of containing heated air.

How is lift created in a hot air balloon

I am looking to start a buisness with a balloon. there is no other buisness like this so i will not disclose what it intails. my question is if i want...
More

What are the modifications of the hot air balloon ever since it was invented?

What is your opinion on hot air balloons? Why?
More
x