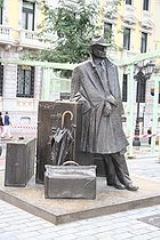 Tour and Travel in Bali island

Visiting New York This Spring? Find the Best Events and Things to Do Including Broadway Shows to See

What Are MicroRNA Detection Assays?
More

"A good traveler has no fixed plans, and is not intent on arriving." ~ Lao Tzu|Lao Tzu

"Anything we fully do is an alone journey." ~ Natalie Goldberg

"Don't listen to what they say. Go see." ~ Chinese_proverbs|Chinese proverb

"Curiosity is the best learning tool one can posses." ~ S M Neel

"It's only when we realize that life is taking us nowhere that it begins to have meaning." ~ P. D. Ouspensky

"if you're not willing to be changed by a place, there's no point in going."

"Life is like stepping onto a boat that is about to sail out to sea and sink." ~ Shunryu Suzuki