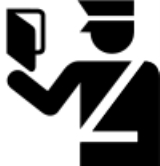 Border controls are measures used by a country
Country
A country is a region legally identified as a distinct entity in political geography. A country may be an independent sovereign state or one that is occupied by another state, as a non-sovereign or formerly sovereign political division, or a geographic region associated with a previously...
to monitor or regulate its border
Border
Borders define geographic boundaries of political entities or legal jurisdictions, such as governments, sovereign states, federated states and other subnational entities. Some borders—such as a state's internal administrative borders, or inter-state borders within the Schengen Area—are open and...
s.

The control of the flow of many people, animals and goods across a border may be controlled by government Customs services. Security is enforced by various kinds of Border Guard
Border guard
The border guard, frontier guard, border patrol, border police, or frontier police of a country is a national security agency that performs border control, i.e., enforces the security of the country's national borders....
s and Coast Guard
Coast guard
A coast guard or coastguard is a national organization responsible for various services at sea. However the term implies widely different responsibilities in different countries, from being a heavily armed military force with customs and security duties to being a volunteer organization tasked with...
s. Official designations, jurisdictions and subordinations of these agencies vary.

The degree of strictness of border controls depends on the country and the border concerned.

Recently went to Algadonas, Mexico for medicine. The exit back into the states has been changed sense we were there last. I am in kidney failure, rece...

What are some of the border policies?
More
x