Encyclopedia
Agkistrodon piscivorus is a venomous snake
Venomous snake
"Poisonous snake" redirects here. For true poisonous snakes, see Rhabdophis.Venomous snakes are snakes which have venom glands and specialized teeth for the injection of venom...
, a species
Species
In biology, a species is one of the basic units of biological classification and a taxonomic rank. A species is often defined as a group of organisms capable of interbreeding and producing fertile offspring. While in many cases this definition is adequate, more precise or differing measures are...
of pit viper
Crotalinae
The Crotalinae, commonly known as "pit vipers" or crotaline snakes, are a subfamily of venomous vipers found in Asia and the Americas. They are distinguished by the presence of a heat-sensing pit organ located between the eye and the nostril on either side of the head...
, found in the southeastern United States
United States
The United States of America is a federal constitutional republic comprising fifty states and a federal district...
. Adults are large and capable of delivering a painful and potentially fatal bite. When antagonized they will stand their ground by coiling their bodies and displaying their fangs. Although their aggression has been exaggerated, on rare occasions territorial males will approach intruders in an aggressive manner. This is the world's only semi-aquatic viper, usually found in or near water, particularly in slow-moving and shallow lakes, streams, and marshes. The snake is a strong swimmer and will even enter the sea, successfully colonizing islands off both the Atlantic and Gulf coasts. The common names for the species include variants on water moccasin, swamp moccasin or black moccasin; also cottonmouth, gapper, or simply viper. Many of the common names refer to the threat display, where this species will often stand its ground and gape at an intruder, exposing the white lining of its mouth.

The diet consists mainly of fish and frogs, but is otherwise highly varied and, uniquely, has even been reported to include carrion
Carrion
Carrion refers to the carcass of a dead animal. Carrion is an important food source for large carnivores and omnivores in most ecosystems. Examples of carrion-eaters include vultures, hawks, eagles, hyenas, Virginia Opossum, Tasmanian Devils, coyotes, Komodo dragons, and burying beetles...
. The specific name is derived from the Latin words piscis and voro, which mean "fish" and "to eat". Three subspecies
Subspecies
Subspecies in biological classification, is either a taxonomic rank subordinate to species, ora taxonomic unit in that rank . A subspecies cannot be recognized in isolation: a species will either be recognized as having no subspecies at all or two or more, never just one...
are currently recognized, including the nominate subspecies described here. 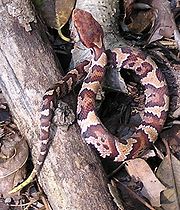 This is the largest species of the genus Agkistrodon
Agkistrodon
Agkistrodon is a genus of venomous pit vipers found in North America from the United States south to northern Costa Rica. The name is derived from the Greek words ἄγκιστρον 'fishhook' and ὁδοὐς 'tooth', and is likely a reference to the fangs...
. Adults commonly exceed 80 cm (31.5 in) in length, females growing smaller than males. Occasionally, individuals may exceed 180 cm (71 in) in length, especially in the eastern part of the range. According to Gloyd and Conant (1990), the largest recorded specimen of A. p. piscivorus was 188 cm (74 in) in length, based on a specimen caught in the Dismal Swamp
Great Dismal Swamp
The Great Dismal Swamp is a marshy area on the Coastal Plain Region of southeastern Virginia and northeastern North Carolina between Norfolk, Virginia, and Elizabeth City, North Carolina in the United States. It is located in parts of southern Chesapeake and Suffolk in Virginia, as well as northern...
region and given to the Philadelphia Zoological Garden
Philadelphia Zoo
The Philadelphia Zoo, located in Philadelphia, Pennsylvania, on the west bank of the Schuylkill River, was the first zoo in the United States. Chartered by the Commonwealth of Pennsylvania on March 21, 1859, its opening was delayed by the American Civil War until July 1, 1874...
. It should be noted, however, that this snake had apparently been injured during capture, died several days later and was measured when straight and relaxed.

The broad head is distinct from the neck, the snout blunt in profile with the rim of the top of the head extending forwards slightly further than the mouth. The body has a heavy build and a tail that is moderately long and slender. On top of the head, a generalized pattern of nine symmetrical head plates is present, although the parietal plates are often fragmented, especially towards the rear. A loreal scale is absent. There are 6-9 supralabials and 8-12 infralabials. At midbody, there are 23-27 rows of dorsal scales
Dorsal scales
In snakes, the dorsal scales are the longitudinal series of plates that encircle the body, but do not include the ventral scales.When counting dorsal scales, numbers are often given for three points along the body, for example 19:21:17...
. All dorsal scale rows have keels
Keeled scales
Keeled scales refer to reptile scales that, rather than being smooth, have a ridge down the center that may or may not extend to the tip of the scale, making them rough to the touch...
, although those on the lowermost scale rows are weak. In males/females, the ventral scales
Ventral scales
In snakes, the ventral scales are the enlarged and transversely elongated scales that extend down the underside of the body from the neck to the anal scale. When counting them, the first is the anteriormost ventral scale that contacts the paraventral row of dorsal scales on either side...
number 130-145/128-144 and the subcaudals 38-54/36-50. Many of the latter may be divided.

Though the majority of specimens are almost or even totally black, (with the exception of head and facial markings) the color pattern may consist of a brown, gray, tan, yellowish olive or blackish ground color, which is overlaid with a series of 10-17 crossbands that are dark brown to almost black. These crossbands, which usually have black edges, are sometimes broken along the dorsal midline to form a series of staggered half bands on either side of the body. These crossbands are visibly lighter in the center, almost matching the ground color, often contain irregular dark markings, and extend well down onto the ventral scales. The dorsal banding pattern fades with age, so that older individuals are an almost uniform olive brown, grayish brown or black. The belly is white, yellowish white or tan, marked with dark spots, and becomes darker posteriorly. The amount of dark pigment on the belly varies from virtually nothing to almost completely black. The head is a more or less uniform brown color, especially in A. p. piscivorus. Subadult specimens may exhibit the same kind of dark, parietal spots that are characteristic of A. contortrix
Agkistrodon contortrix
Agkistrodon contortrix is a species of venomous snake found in North America, a member of the Crotalinae subfamily. The more common name for the species is "copperhead". The behavior of Agkistrodon contortrix may lead to accidental encounters with humans...
, but sometimes these are still visible in adults. Eastern populations have a broad dark postocular stripe, bordered with pale pigment above and below, that is faint or absent in western populations. The underside of the head is generally whitish, cream or tan.

Juvenile and subadult specimens generally have a more contrasting color pattern, with dark crossbands on a lighter ground color. The ground color is then tan, brown or reddish brown. The tip of the tail is usually yellowish, becoming greenish yellow or greenish in subadults, and then black in adults. On some juveniles, the banding pattern can also be seen on the tail.

The watersnakes of the genus Nerodia
Nerodia
Nerodia is a genus of nonvenomous colubrid snakes commonly referred to as water snakes.- Description :Nerodia species vary greatly, but all are relatively heavy-bodied snakes, sometimes growing to 1.2 m or larger. They have flattened heads, with small eyes that have round pupils, and keeled...
are also similar in appearance, being thick-bodied with large heads, but they have round pupils, no loreal pit
Loreal pit
The Loreal pit is the deep depression, or fossa, in the loreal area on either side of the head in crotaline snakes . It is located behind the nostril and in front of the eye, but below the line that runs between the centers of each. It is the external opening to an extremely sensitive infrared...
, a single anal plate, subcaudal scales that are divided throughout and a distinctive overall color pattern.

This is a list of common name
Common name
A common name of a taxon or organism is a name in general use within a community; it is often contrasted with the scientific name for the same organism...
s for Agkistrodon piscivorus, some of which also refer to other species:

Catesby
Mark Catesby
Mark Catesby was an English naturalist. Between 1731 and 1743 Catesby published his Natural History of Carolina, Florida and the Bahama Islands, the first published account of the flora and fauna of North America...
(1743) referred to it as the "water viper", while Lacépède (1789) called it "le piscivore." The first appearance of "water moccasin" and "cotton mouth" was in Holbrook's
John Edwards Holbrook
John Edwards Holbrook American zoologist, herpetologist, physician, and naturalist, was born in Beaufort, South Carolina, the son of Silas Holbrook, a teacher, and Mary Edwards....
North American Herpetology (1838, 1842). 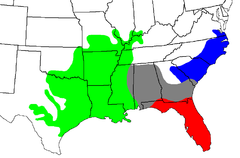 Found in the eastern United States
United States
The United States of America is a federal constitutional republic comprising fifty states and a federal district...
from Virginia
Virginia
The Commonwealth of Virginia , is a U.S. state on the Atlantic Coast of the Southern United States. Virginia is nicknamed the "Old Dominion" and sometimes the "Mother of Presidents" after the eight U.S. presidents born there...
, south through the Florida
Florida
Florida is a state in the southeastern United States, located on the nation's Atlantic and Gulf coasts. It is bordered to the west by the Gulf of Mexico, to the north by Alabama and Georgia and to the east by the Atlantic Ocean. With a population of 18,801,310 as measured by the 2010 census, it...
peninsula and west to Arkansas
Arkansas
Arkansas is a state located in the southern region of the United States. Its name is an Algonquian name of the Quapaw Indians. Arkansas shares borders with six states , and its eastern border is largely defined by the Mississippi River...
, eastern and southern Oklahoma
Oklahoma
Oklahoma is a state located in the South Central region of the United States of America. With an estimated 3,751,351 residents as of the 2010 census and a land area of 68,667 square miles , Oklahoma is the 28th most populous and 20th-largest state...
, and east and central Texas
Texas
Texas is the second largest U.S. state by both area and population, and the largest state by area in the contiguous United States.The name, based on the Caddo word "Tejas" meaning "friends" or "allies", was applied by the Spanish to the Caddo themselves and to the region of their settlement in...
. A few records exist of the species being found along the Rio Grande
Rio Grande
The Rio Grande is a river that flows from southwestern Colorado in the United States to the Gulf of Mexico. Along the way it forms part of the Mexico – United States border. Its length varies as its course changes...
in Texas, but these are thought to represent disjunct populations, now possibly eradicated. The type locality given is "Carolina," although Schmidt (1953) proposed that this be restricted to the area around Charleston, South Carolina
Charleston, South Carolina
Charleston is the second largest city in the U.S. state of South Carolina. It was made the county seat of Charleston County in 1901 when Charleston County was founded. The city's original name was Charles Towne in 1670, and it moved to its present location from a location on the west bank of the...
.
x