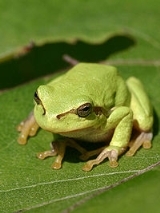 Encyclopedia
The genus
Genus
In biology, a genus is a low-level taxonomic rank used in the biological classification of living and fossil organisms, which is an example of definition by genus and differentia...
Hyla is one of approximately 38 genera in the New World
New World
The New World is one of the names used for the Western Hemisphere, specifically America and sometimes Oceania . The term originated in the late 15th century, when America had been recently discovered by European explorers, expanding the geographical horizon of the people of the European middle...
family of tree frog
Tree frog
Hylidae is a wide-ranging family of frogs commonly referred to as "tree frogs and their allies". However, the hylids include a diversity of frog species, many of which do not live in trees, but are terrestrial or semi-aquatic.-Characteristics:...
s (Hylidae). The word Hyla translates to "tree," and tree frogs are indeed arboreal. They have a very broad distribution; species can be found in Europe
Europe
Europe is, by convention, one of the world's seven continents. Comprising the westernmost peninsula of Eurasia, Europe is generally 'divided' from Asia to its east by the watershed divides of the Ural and Caucasus Mountains, the Ural River, the Caspian and Black Seas, and the waterways connecting...
, Asia
Asia
Asia is the world's largest and most populous continent, located primarily in the eastern and northern hemispheres. It covers 8.7% of the Earth's total surface area and with approximately 3.879 billion people, it hosts 60% of the world's current human population...
, Africa
Africa
Africa is the world's second largest and second most populous continent, after Asia. At about 30.2 million km² including adjacent islands, it covers 6% of the Earth's total surface area and 20.4% of the total land area...
, and across the Americas
Americas
The Americas, or America , are lands in the Western hemisphere, also known as the New World. In English, the plural form the Americas is often used to refer to the landmasses of North America and South America with their associated islands and regions, while the singular form America is primarily...
.

There were more than 300 described species in this genus, but after a major revision of the Hylidae family most of these have been moved to new genera so the genus now only contains 33 species".