Encyclopedia
The AEX index, derived from Amsterdam Exchange index, is a stock market index
Stock market index
A stock market index is a method of measuring a section of the stock market. Many indices are cited by news or financial services firms and are used as benchmarks, to measure the performance of portfolios such as mutual funds....
composed of Dutch
Netherlands
The Netherlands is a constituent country of the Kingdom of the Netherlands, located mainly in North-West Europe and with several islands in the Caribbean. Mainland Netherlands borders the North Sea to the north and west, Belgium to the south, and Germany to the east, and shares maritime borders...
companies that trade on Euronext Amsterdam
Amsterdam Stock Exchange
The Amsterdam Stock Exchange is the former name for the stock exchange based in Amsterdam. It merged on 22 September 2000 with the Brussels Stock Exchange and the Paris Stock Exchange to form Euronext, and is now known as Euronext Amsterdam.-History:...
, formerly known as the Amsterdam Stock Exchange. Started in 1983, the index is composed of a maximum of 25 of the most actively traded securities
Security (finance)
A security is generally a fungible, negotiable financial instrument representing financial value. Securities are broadly categorized into:* debt securities ,* equity securities, e.g., common stocks; and,...
on the exchange. It is one of the main national indices of the pan-European stock exchange group Euronext
Euronext
Euronext N.V. is a pan-European stock exchange based in Amsterdam and with subsidiaries in Belgium, France, Netherlands, Portugal and the United Kingdom. In addition to equities and derivatives markets, the Euronext group provides clearing and information services...
alongside Brussels
Brussels
Brussels , officially the Brussels Region or Brussels-Capital Region , is the capital of Belgium and the de facto capital of the European Union...
' BEL20
BEL20
The BEL20 is the benchmark stock market index of Euronext Brussels. In general, the index consists of a minimum of 10 and a maximum of 20 companies traded at the Brussels Stock Exchange. Since 20 June 2011, the BEL20 has contained 20 listings.-Rules:...
, Paris
Paris
Paris is the capital and largest city in France, situated on the river Seine, in northern France, at the heart of the Île-de-France region...
's CAC 40
CAC 40
The CAC 40 is a benchmark French stock market index. The index represents a capitalization-weighted measure of the 40 most significant values among the 100 highest market caps on the Paris Bourse...
and Lisbon
Lisbon
Lisbon is the capital city and largest city of Portugal with a population of 545,245 within its administrative limits on a land area of . The urban area of Lisbon extends beyond the administrative city limits with a population of 3 million on an area of , making it the 9th most populous urban...
's PSI-20
PSI-20
The PSI-20 is a benchmark stock market index of companies that trade on Euronext Lisbon, the main stock exchange of Portugal. The index tracks the prices of the twenty listings with the largest market capitalisation and share turnover in the PSI Geral, the general stock market of the Lisbon exchange...
.

The AEX started from a base level of 100 index points on 3 January 1983 (a corresponding value of 45.378 is used for historic comparisons due to the adoption of the Euro
Euro
The euro is the official currency of the eurozone: 17 of the 27 member states of the European Union. It is also the currency used by the Institutions of the European Union. The eurozone consists of Austria, Belgium, Cyprus, Estonia, Finland, France, Germany, Greece, Ireland, Italy, Luxembourg,...
). The index's peak to date is 703.18, reached on 5 September 2000 at the height of the dot-com bubble
Dot-com bubble
The dot-com bubble was a speculative bubble covering roughly 1995–2000 during which stock markets in industrialized nations saw their equity value rise rapidly from growth in the more...
. The index value more than halved over the following three years before recovering in line with most global financial markets.

The AEX index enjoyed its second largest one-day loss on September 29, 2008, when the index closed down almost 9%. The decade between 1998 and 2008 has been bad for the AEX index, as it has been the worst performing stock index except for the OMX Iceland 15
OMX Iceland 15
The OMX Iceland 15 is a defunct stock market index which consisted of a maximum of 15 companies listed on the OMX Iceland Stock Exchange with the highest market capitalization. At the final official review of the index effective in January 2009, 12 companies made up the index, four of which were...
. The preceding years were a lot better compared to the rest of the world.

As of 2011, the AEX index composition is reviewed four times a year - a full "annual" review in March and interim "quarterly" reviews in June, September and December. Any changes made as a result of the reviews take effect on the third Friday of the month. Previously reviews were held in March and September only. Prior to 2008, index changes were made only annually in March.

At the main March review date, the 23 companies listed on Euronext Amsterdam's regulated market with the highest share
Stock
The capital stock of a business entity represents the original capital paid into or invested in the business by its founders. It serves as a security for the creditors of a business since it cannot be withdrawn to the detriment of the creditors...
turnover (in Euro
Euro
The euro is the official currency of the eurozone: 17 of the 27 member states of the European Union. It is also the currency used by the Institutions of the European Union. The eurozone consists of Austria, Belgium, Cyprus, Estonia, Finland, France, Germany, Greece, Ireland, Italy, Luxembourg,...
s) over the previous year are admitted to the index. Of the companies ranked between 24th and 27th, a further two are selected with preference given to existing constituents of the index. Companies which have fewer than 25% of shares considered free float on Euronext Amsterdam are, however, ineligible for inclusion. Unlike some other Europe
Europe
Europe is, by convention, one of the world's seven continents. Comprising the westernmost peninsula of Eurasia, Europe is generally 'divided' from Asia to its east by the watershed divides of the Ural and Caucasus Mountains, the Ural River, the Caspian and Black Seas, and the waterways connecting...
an benchmark equity indices (such as the OMXS30
OMX Stockholm 30
The OMX Stockholm 30 is a stock market index for the Stockholm Stock Exchange. It is a market value-weighted index that consists of the 30 most-traded stock classes.- Composition :...
), if a company has more than one class of shares traded on the exchange, only the most actively traded of these will be accepted into the AEX. If a company or companies are removed from the index due to delisting, acquisition
Mergers and acquisitions
Mergers and acquisitions refers to the aspect of corporate strategy, corporate finance and management dealing with the buying, selling, dividing and combining of different companies and similar entities that can help an enterprise grow rapidly in its sector or location of origin, or a new field or...
or another reason, no replacements are made until the next review date.

At the three interim reviews in June, September and December, no changes are made to the AEX unless either the index has seen one or more constituents removed, or a non-constituent possesses a share turnover ranked 15th or higher overall over the previous 12 months. If vacancies are to be filled, the highest-ranking non-AEX companies are selected to join the index.

The AEX is a market value-weighted index
Market value-weighted index
A capitalization-weighted index is an index whose components are weighted according to the total market value of their outstanding shares. Also called a market-value-weighted index...
. At each main annual review, the index weightings of companies in the index are capped at 15%, but range freely with share price
Share price
A share price is the price of a single share of a number of saleable stocks of a company. Once the stock is purchased, the owner becomes a shareholder of the company that issued the share.-Behavior of share prices:...
subsequently. The index weights are calculated with respect to the closing prices of the relevant companies on March 1. At the interim reviews, weightings after adjustment are left as close as possible to those of the previous day and are not re-capped.

The index comprises a basket
Basket (finance)
A basket is an economic term for a group of several securities created for the purpose of simultaneous buying or selling. Baskets are frequently used for program trading.Certain specific products can be seen as specialized "baskets"....
of shares, the numbers of which are based on the constituent weights and index value at the time of readjustment. The value of the index at any given time, It, is calculated using the following formula:

with t the day of calculation; N the number of constituent shares in the index (usually 25); Qi,t the number of shares of company i on day t; Fi,t the free float factor of share i; fi,t the capping factor of share i (exactly 1 for all companies not subject to the 15% cap); Ci,t the price of share i on day t; and dt the index divisor (a factor calculated from the base capitalisation of the index, which is updated to reflect corporate actions and other index changes.

The index is composed of the following listings as of the quarterly interim review effective 20 June 2011, when Wereldhave
Wereldhave
Wereldhave N.V. is a Dutch real estate investment company founded in 1930, and headquartered in The Hague. The company focuses on investments in commercial property. In 2010 the firm recorded a profit of €89 million, against a market capitalisation of around €1.6 billion...
was removed from the index to bring the number of constituents down to 25 (TNT N.V.
TNT N.V.
TNT N.V., more commonly known as TNT, is an international express and mail delivery services company with headquarters in Hoofddorp, Netherlands. In the Netherlands, TNT operates the national postal service under the name TNT Post. The group also offers postal services in eight other European...
having split into PostNL
PostNL
PostNL is a mail, parcel and e-commerce corporation with operations in the Netherlands, Germany, Italy, and the United Kingdom. It is listed at Euronext Amsterdam. Formerly a subsidiary of TNT N.V., it became an independent company upon TNT's demerger in May 2011.- History :As decided by a general...
and TNT Express
TNT Express
TNT Express N.V. is an international express and cargo delivery services company with headquarters in Hoofddorp, Netherlands. The firm has fully owned operations in 65 countries and delivers documents, parcels and pieces of freight to over 200 countries...
during the previous quarter). The September 2011 review saw no changes to the index. 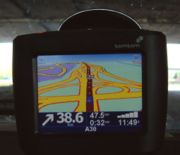