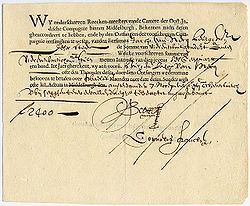 The Amsterdam Stock Exchange is the former name for the stock exchange
Stock exchange
A stock exchange is an entity that provides services for stock brokers and traders to trade stocks, bonds, and other securities. Stock exchanges also provide facilities for issue and redemption of securities and other financial instruments, and capital events including the payment of income and...
based in Amsterdam
Amsterdam
Amsterdam is the largest city and the capital of the Netherlands. The current position of Amsterdam as capital city of the Kingdom of the Netherlands is governed by the constitution of August 24, 1815 and its successors. Amsterdam has a population of 783,364 within city limits, an urban population...
. It merged on 22 September 2000 with the Brussels Stock Exchange
Brussels Stock Exchange
The Brussels Stock Exchange was founded in Brussels, Belgium, by Napoleonic decree in 1801. On September 22, 2000, the BSE merged with Paris Bourse, Lisbon Stock Exchange and the stock exchanges of Amsterdam, to form Euronext N.V., the first pan-European exchange for equities and derivatives,...
and the Paris Stock Exchange to form Euronext
Euronext
Euronext N.V. is a pan-European stock exchange based in Amsterdam and with subsidiaries in Belgium, France, Netherlands, Portugal and the United Kingdom. In addition to equities and derivatives markets, the Euronext group provides clearing and information services...
, and is now known as Euronext Amsterdam.

The Amsterdam Stock Exchange is considered the oldest in the world. It was established in 1602 by the Dutch East India Company
Dutch East India Company
The Dutch East India Company was a chartered company established in 1602, when the States-General of the Netherlands granted it a 21-year monopoly to carry out colonial activities in Asia...
(Verenigde Oostindische Compagnie, or "VOC") for dealings in its printed stock
Stock
The capital stock of a business entity represents the original capital paid into or invested in the business by its founders. It serves as a security for the creditors of a business since it cannot be withdrawn to the detriment of the creditors...
s and bonds
Bond (finance)
In finance, a bond is a debt security, in which the authorized issuer owes the holders a debt and, depending on the terms of the bond, is obliged to pay interest to use and/or to repay the principal at a later date, termed maturity...
. It was subsequently renamed the Amsterdam Bourse and was the first to formally begin trading in securities
Security (finance)
A security is generally a fungible, negotiable financial instrument representing financial value. Securities are broadly categorized into:* debt securities ,* equity securities, e.g., common stocks; and,...
.

The European Option Exchange (EOE) was founded in 1978 in Amsterdam as a futures
Futures contract
In finance, a futures contract is a standardized contract between two parties to exchange a specified asset of standardized quantity and quality for a price agreed today with delivery occurring at a specified future date, the delivery date. The contracts are traded on a futures exchange...
and options
Option (finance)
In finance, an option is a derivative financial instrument that specifies a contract between two parties for a future transaction on an asset at a reference price. The buyer of the option gains the right, but not the obligation, to engage in that transaction, while the seller incurs the...
exchange. In 1983 it started a stock market index
Stock market index
A stock market index is a method of measuring a section of the stock market. Many indices are cited by news or financial services firms and are used as benchmarks, to measure the performance of portfolios such as mutual funds....
, called the EOE index, consisting of the 25 largest companies that trade on the stock exchange.

In 1997 the Amsterdam Stock Exchange and the EOE merged, and its blue chip index was renamed AEX
AEX index
The AEX index, derived from Amsterdam Exchange index, is a stock market index composed of Dutch companies that trade on Euronext Amsterdam, formerly known as the Amsterdam Stock Exchange. Started in 1983, the index is composed of a maximum of 25 of the most actively traded securities on the exchange...
, for "Amsterdam EXchange". It is now managed by Euronext Amsterdam.