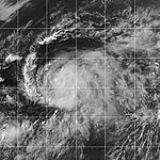 Encyclopedia
The 2003 Pacific hurricane season produced an unusually large number of tropical cyclone
Tropical cyclone
A tropical cyclone is a storm system characterized by a large low-pressure center and numerous thunderstorms that produce strong winds and heavy rain. Tropical cyclones strengthen when water evaporated from the ocean is released as the saturated air rises, resulting in condensation of water vapor...
s which affected Mexico
Mexico
The United Mexican States , commonly known as Mexico , is a federal constitutional republic in North America. It is bordered on the north by the United States; on the south and west by the Pacific Ocean; on the southeast by Guatemala, Belize, and the Caribbean Sea; and on the east by the Gulf of...
. The most notable cyclones the year were Hurricanes Ignacio
Hurricane Ignacio (2003)
Hurricane Ignacio was the latest-forming first hurricane of a Pacific hurricane season since reliable satellite observation began in 1966. The ninth tropical storm of the 2003 Pacific hurricane season, Ignacio developed out of a tropical wave on August 22 a short distance off the coast of Mexico...
and Marty
Hurricane Marty (2003)
Hurricane Marty was the deadliest tropical cyclone of the 2003 Pacific hurricane season. Forming on September 18, it became the 13th tropical storm and fourth hurricane of the year...
, which killed 2 and 12 people in Mexico, respectively, and were collectively responsible for about $1 billion (2003 USD
United States dollar
The United States dollar , also referred to as the American dollar, is the official currency of the United States of America. It is divided into 100 smaller units called cents or pennies....
) in damage. Three other Pacific storms, two of which were hurricanes, and three Atlantic storms
2003 Atlantic hurricane season
The 2003 Atlantic hurricane season was an active Atlantic hurricane season with tropical activity before and after the official bounds of the season – the first such occurrence in 50 years. The season produced 21 tropical cyclones, of which 16 developed into named storms; seven...
also had a direct impact on Mexico. The only other significant storm of the season was Hurricane Jimena
Hurricane Jimena (2003)
Hurricane Jimena was the tenth named storm and second hurricane of the 2003 Pacific hurricane season. Jimena formed on August 28 in the far Eastern Pacific Ocean as a tropical depression and moved westward where it rapidly became a hurricane the following day...
, which passed just to the south of Hawaii
Hawaii (island)
The Island of Hawaii, also called the Big Island or Hawaii Island , is a volcanic island in the North Pacific Ocean...
, the first storm to directly threaten Hawaii
Hawaii
Hawaii is the newest of the 50 U.S. states , and is the only U.S. state made up entirely of islands. It is the northernmost island group in Polynesia, occupying most of an archipelago in the central Pacific Ocean, southwest of the continental United States, southeast of Japan, and northeast of...
for several years.

The season officially started on May 15, 2003 in the eastern Pacific
Pacific Ocean
The Pacific Ocean is the largest of the Earth's oceanic divisions. It extends from the Arctic in the north to the Southern Ocean in the south, bounded by Asia and Australia in the west, and the Americas in the east.At 165.2 million square kilometres in area, this largest division of the World...
, and on June 1, 2003 in the central Pacific, and lasted until November 30, 2003. These dates conventionally delimit the period of each year when most tropical cyclones form in the northeastern Pacific Ocean. The season saw 16 tropical storms form, of which 7 became hurricanes, which is about average. However, this season was the first Pacific hurricane season since 1977
1977 Pacific hurricane season
The 1977 Pacific hurricane season was, at the time, the least active in recorded history. Only eight tropical storms formed, and four hurricanes; they would be tied and surpassed, respectively, by the 2010 Pacific hurricane season. There were no major hurricanes; the next time this happened would...
to have no systems become major hurricanes by reaching Category 3 or higher on the Saffir-Simpson Hurricane Scale
Saffir-Simpson Hurricane Scale
The Saffir–Simpson Hurricane Scale , or the Saffir–Simpson Hurricane Wind Scale , classifies hurricanes — Western Hemisphere tropical cyclones that exceed the intensities of tropical depressions and tropical storms — into five categories distinguished by the intensities of their sustained winds...
.

No central Pacific names were used; the first name used would have been Ioke.