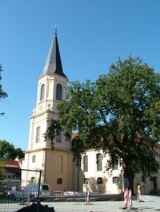 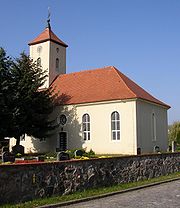 Zossen is a German
Germany
Germany , officially the Federal Republic of Germany , is a federal parliamentary republic in Europe. The country consists of 16 states while the capital and largest city is Berlin. Germany covers an area of 357,021 km2 and has a largely temperate seasonal climate...
town in the district of Teltow-Fläming
Teltow-Fläming
Teltow-Fläming is a Kreis in the southwestern part of Brandenburg, Germany. Neighboring districts are Dahme-Spreewald, Elbe-Elster, the districts Wittenberg in Saxony-Anhalt, the district Potsdam-Mittelmark, and the Bundesland Berlin.-Geography:The district is named after the two main regions...
in Brandenburg
Brandenburg
Brandenburg is one of the sixteen federal-states of Germany. It lies in the east of the country and is one of the new federal states that were re-created in 1990 upon the reunification of the former West Germany and East Germany. The capital is Potsdam...
, south of Berlin
Berlin
Berlin is the capital city of Germany and is one of the 16 states of Germany. With a population of 3.45 million people, Berlin is Germany's largest city. It is the second most populous city proper and the seventh most populous urban area in the European Union...
, and next to the B96 highway
Bundesstraße 96
The Bundesstraße 96 is a federal highway in Germany. It begins in Zittau in the Saxony, close to the border triangle between Germany, Poland, and the Czech Republic, heads north through Berlin and ends in Sassnitz on the island of Rügen in the Baltic Sea...
. Zossen consists of several smaller municipalities, which were grouped together in 2003 to form the city.

Since the 2003 municipal reform, Zossen consists of the following districts and municipalities:

Zossen, like most places in Brandenburg, was originally a Slavic
Slavic peoples
The Slavic people are an Indo-European panethnicity living in Eastern Europe, Southeast Europe, North Asia and Central Asia. The term Slavic represents a broad ethno-linguistic group of people, who speak languages belonging to the Slavic language family and share, to varying degrees, certain...
settlement. Its name may derive from Sosna meaning pine
Pine
Pines are trees in the genus Pinus ,in the family Pinaceae. They make up the monotypic subfamily Pinoideae. There are about 115 species of pine, although different authorities accept between 105 and 125 species.-Etymology:...
, a tree quite common in the region.

In 1875 Zossen station opened at the railway line from Berlin to Dresden
Dresden
Dresden is the capital city of the Free State of Saxony in Germany. It is situated in a valley on the River Elbe, near the Czech border. The Dresden conurbation is part of the Saxon Triangle metropolitan area....
and the Prussian
Kingdom of Prussia
The Kingdom of Prussia was a German kingdom from 1701 to 1918. Until the defeat of Germany in World War I, it comprised almost two-thirds of the area of the German Empire...
military railway to the artillery range at Kummersdorf-Gut in present-day Am Mellensee
Am Mellensee
Am Mellensee is a municipality in the Teltow-Fläming district of Brandenburg, Germany. The municipality, south of Berlin, is the home of the Benedictine Abbey of St. Gertrud. An Associated Press story appearing in the August 1, 2011 online version of the St. Louis Post-Dispatch detailed the...
. Between 1901 and 1904, Zossen adopted the use of different high-speed vehicles, such as electric locomotives and trams, for transportation to and from Berlin-Marienfelde
Marienfelde
Marienfelde is a locality in southwest Berlin. It is a mixed industrial and residential area, and part of the borough of Tempelhof-Schöneberg.-Transportation and industry:...
. These vehicles were powered by an alternating current of 15kV and used a variable frequency. The power was transmitted by three vertical overhead lines.

In 1910 a proving ground and a garrison of the Imperial German Army
German Army (German Empire)
The German Army was the name given the combined land forces of the German Empire, also known as the National Army , Imperial Army or Imperial German Army. The term "Deutsches Heer" is also used for the modern German Army, the land component of the German Bundeswehr...
was established at the Waldstadt section of the Wünsdorf community. In World War I it was the site of several prisoner-of-war camp
Prisoner-of-war camp
A prisoner-of-war camp is a site for the containment of combatants captured by their enemy in time of war, and is similar to an internment camp which is used for civilian populations. A prisoner of war is generally a soldier, sailor, or airman who is imprisoned by an enemy power during or...
s, including the "crescent
Crescent
In art and symbolism, a crescent is generally the shape produced when a circular disk has a segment of another circle removed from its edge, so that what remains is a shape enclosed by two circular arcs of different diameters which intersect at two points .In astronomy, a crescent...
camp" (Halbmondlager) for Muslim
Muslim
A Muslim, also spelled Moslem, is an adherent of Islam, a monotheistic, Abrahamic religion based on the Quran, which Muslims consider the verbatim word of God as revealed to prophet Muhammad. "Muslim" is the Arabic term for "submitter" .Muslims believe that God is one and incomparable...
fighters of the Triple Entente
Triple Entente
The Triple Entente was the name given to the alliance among Britain, France and Russia after the signing of the Anglo-Russian Entente in 1907....
, where the first wooden mosque
Mosque
A mosque is a place of worship for followers of Islam. The word is likely to have entered the English language through French , from Portuguese , from Spanish , and from Berber , ultimately originating in — . The Arabic word masjid literally means a place of prostration...
in Germany was erected. From 1939 to 1945, Wünsdorf hosted the underground headquarters of the German Wehrmacht
Wehrmacht
The Wehrmacht – from , to defend and , the might/power) were the unified armed forces of Nazi Germany from 1935 to 1945. It consisted of the Heer , the Kriegsmarine and the Luftwaffe .-Origin and use of the term:...
(OKW) and Army's High Command (OKH). After World War II the area until 1994 was the site of a Soviet
Soviet Union
The Soviet Union , officially the Union of Soviet Socialist Republics , was a constitutionally socialist state that existed in Eurasia between 1922 and 1991....
military camp, and since then has been returned to civilian use as the Wünsdorf-Waldstadt book town
Book town
A book town is a town or village with a large number of second-hand or antiquarian book shops. These shops, and sometimes also literary festivals, attract bibliophile tourists to them...
.