Encyclopedia
Zongzi is a traditional Chinese food, made of glutinous rice
Glutinous rice
Glutinous rice is a type of short-grained Asian rice that is especially sticky when cooked. It is called glutinous Glutinous rice (Oryza sativa var. glutinosa or Oryza glutinosa; also called sticky rice, sweet rice, waxy rice, botan rice, biroin chal, mochi rice, and pearl rice, and pulut) is a...
stuffed with different fillings and wrapped in bamboo
Bamboo
Bamboo is a group of perennial evergreens in the true grass family Poaceae, subfamily Bambusoideae, tribe Bambuseae. Giant bamboos are the largest members of the grass family....
or reed
Reed (plant)
Reed is a generic polyphyletic botanical term used to describe numerous tall, grass-like plants of wet places, which are the namesake vegetation of reed beds...
leaves. They are cooked by steaming or boiling. Laotians, Thais, and Cambodians (known as nom asom) also have similar traditional dishes. In the Western world
Western world
The Western world, also known as the West and the Occident , is a term referring to the countries of Western Europe , the countries of the Americas, as well all countries of Northern and Central Europe, Australia and New Zealand...
, they are also known as rice dumplings. In Indonesia and Malaysia, they are known as bakcang, bacang, or zang , a loanword from Hakka
Hakka
The Hakka , sometimes Hakka Han, are Han Chinese who speak the Hakka language and have links to the provincial areas of Guangdong, Jiangxi, Guangxi, Sichuan, Hunan and Fujian in China....
, a Chinese dialect commonly used among Indonesian-Chinese, rather than Mandarin. Along the same lines, zongzi are more popularly known as machang among Chinese Filipino
Chinese Filipino
A Chinese Filipino derived from two words: "Tsino" and "Pinoy" ) is a Philippine national of Chinese ethnicity but born/raised in the Philippines....
s. 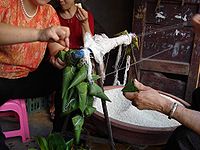 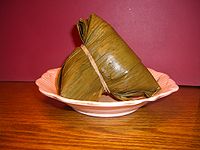 Zongzi are traditionally eaten during the Dragon Boat Festival
Dragon Boat Festival
Duanwu Festival, also known as Dragon Boat Festival and the Double Fifth, is a traditional and statutory holiday originating in China and associated with a number of East Asian and Southeast Asian societies...
(Mandarin: Duānwǔ; Cantonese: Tuen Ng), which falls on the fifth day of the fifth month of the lunar calendar
Lunar calendar
A lunar calendar is a calendar that is based on cycles of the lunar phase. A common purely lunar calendar is the Islamic calendar or Hijri calendar. A feature of the Islamic calendar is that a year is always 12 months, so the months are not linked with the seasons and drift each solar year by 11 to...
(approximately late-May to mid-June), commemorating the death of Qu Yuan
Qu Yuan
Qu Yuan was a Chinese poet who lived during the Warring States Period in ancient China. He is famous for his contributions to the poetry collection known as the Chu-ci...
, a famous Chinese poet from the kingdom of Chu
Chu (state)
The State of Chu was a Zhou Dynasty vassal state in present-day central and southern China during the Spring and Autumn period and Warring States Period . Its ruling house had the surname Nai , and clan name Yan , later evolved to surname Mi , and clan name Xiong...
who lived during the Warring States period
Warring States Period
The Warring States Period , also known as the Era of Warring States, or the Warring Kingdoms period, covers the Iron Age period from about 475 BC to the reunification of China under the Qin Dynasty in 221 BC...
. Known for his patriotism, Qu Yuan tried unsuccessfully to warn his king and countrymen against the expansionism
Expansionism
In general, expansionism consists of expansionist policies of governments and states. While some have linked the term to promoting economic growth , more commonly expansionism refers to the doctrine of a state expanding its territorial base usually, though not necessarily, by means of military...
of their Qin
Qin (state)
The State of Qin was a Chinese feudal state that existed during the Spring and Autumn and Warring States Periods of Chinese history...
neighbors. When the Qin
Qin (state)
The State of Qin was a Chinese feudal state that existed during the Spring and Autumn and Warring States Periods of Chinese history...
general Bai Qi
Bai Qi
Bái Qǐ was an outstanding military leader of the State of Qin during the Warring States Period of Chinese history. Born in Mei , as commander of the Qin army for more than 30 years, Bai Qi was responsible for the deaths of a total over 890,000 enemy soldiers, earning him the nickname Ren Tu...
took Yingdu, the Chu capital, in 278 BC, Qu Yuan's grief was so intense that he drowned himself in the Miluo river
Miluo River
The Miluo River is an important river in the Dongting Lake watershed. It is famous as the location of the ritual suicide in 278 BC of Qu Yuan, a poet of Chu state during the Warring States period, in protest against the corruption of the era....
after penning the Lament for Ying
Lament for Ying
Lament for Ying is a poem written by noted Chinese poet Qu Yuan in around 278 BCE. It is from the "Nine Declarations" section of the Chuci poetry anthology, compiled in ancient China.-Background:...
. According to legend, packets of rice were thrown into the river to prevent the fish
Fish
Fish are a paraphyletic group of organisms that consist of all gill-bearing aquatic vertebrate animals that lack limbs with digits. Included in this definition are the living hagfish, lampreys, and cartilaginous and bony fish, as well as various extinct related groups...
from eating the poet's body.

The shape of zongzi range from being relatively tetrahedral in northern China to cylindrical in southern China. Wrapping a zongzi neatly is a skill that is passed down through families
Family
In human context, a family is a group of people affiliated by consanguinity, affinity, or co-residence. In most societies it is the principal institution for the socialization of children...
, as are the recipes. Making zongzi is traditionally a family event of which everyone helps out.

While traditional zongzi are wrapped in bamboo
Bamboo
Bamboo is a group of perennial evergreens in the true grass family Poaceae, subfamily Bambusoideae, tribe Bambuseae. Giant bamboos are the largest members of the grass family....
leaves, the leaves of lotus
Nelumbo nucifera
Nelumbo nucifera, known by a number of names including Indian Lotus, Sacred Lotus, Bean of India, or simply Lotus, is a plant in the monogeneric family Nelumbonaceae...
, maize
Maize
Maize known in many English-speaking countries as corn or mielie/mealie, is a grain domesticated by indigenous peoples in Mesoamerica in prehistoric times. The leafy stalk produces ears which contain seeds called kernels. Though technically a grain, maize kernels are used in cooking as a vegetable...
, banana
Banana
Banana is the common name for herbaceous plants of the genus Musa and for the fruit they produce. Bananas come in a variety of sizes and colors when ripe, including yellow, purple, and red....
, canna
Canna (plant)
Canna is a genus of nineteen species of flowering plants. The closest living relations to cannas are the other plant families of the order Zingiberales, that is the gingers, bananas, marantas, heliconias, strelitzias, etc.Canna is the only genus in the family Cannaceae...
, shell ginger
Alpinia zerumbet
Alpinia zerumbet is a Chinese perennial plant of the ginger family ....
and pandan
Pandanus
Pandanus is a genus of monocots with about 600 known species. They are numerous palmlike dioecious trees and shrubs native of the Old World tropics and subtropics. They are classified in the order Pandanales, family Pandanaceae.-Overview:...
leaves sometimes are used as substitutes in other countries. Each kind of leaf imparts its own unique smell and flavor to the rice.

The fillings used for zongzi vary from region to region, but the rice
Rice
Rice is the seed of the monocot plants Oryza sativa or Oryza glaberrima . As a cereal grain, it is the most important staple food for a large part of the world's human population, especially in East Asia, Southeast Asia, South Asia, the Middle East, and the West Indies...
used is always glutinous rice
Glutinous rice
Glutinous rice is a type of short-grained Asian rice that is especially sticky when cooked. It is called glutinous Glutinous rice (Oryza sativa var. glutinosa or Oryza glutinosa; also called sticky rice, sweet rice, waxy rice, botan rice, biroin chal, mochi rice, and pearl rice, and pulut) is a...
(also called "sticky rice" or "sweet rice"). Depending on the region, the rice may be lightly precooked by stir-frying or soaked in water before using. 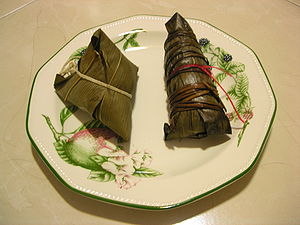 Zongzi need to be steamed
Steaming
Steaming is a method of cooking using steam. Steaming is considered a healthy cooking technique and capable of cooking almost all kinds of food.-Method:...
or boiled
Boiling
Boiling is the rapid vaporization of a liquid, which occurs when a liquid is heated to its boiling point, the temperature at which the vapor pressure of the liquid is equal to the pressure exerted on the liquid by the surrounding environmental pressure. While below the boiling point a liquid...
for several hours depending on how the rice is made prior to being added, along with the fillings. However, as the modes of zongzi styles have traveled and become mixed, today one can find all kinds of zongzi at traditional markets, and their types are not confined to which side of the Yellow River
Yellow River
The Yellow River or Huang He, formerly known as the Hwang Ho, is the second-longest river in China and the sixth-longest in the world at the estimated length of . Originating in the Bayan Har Mountains in Qinghai Province in western China, it flows through nine provinces of China and empties into...
they originated from. 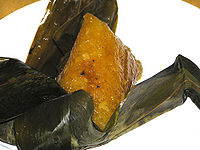