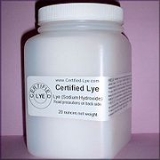 Solid dry lye is commonly available as flakes, pellets, microbeads, and coarse powder (most commonly flakes). It is also available as solution, often dissolved in water. Lye is valued for its use in food preparation, soap making, biodiesel
Biodiesel
Biodiesel refers to a vegetable oil- or animal fat-based diesel fuel consisting of long-chain alkyl esters. Biodiesel is typically made by chemically reacting lipids with an alcohol....
production, and household uses, such as oven cleaner and drain opener. 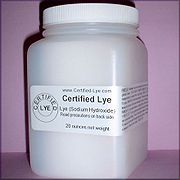 Lye is used to cure
Curing (food preservation)
Curing refers to various food preservation and flavoring processes, especially of meat or fish, by the addition of a combination of salt, nitrates, nitrite or sugar. Many curing processes also involve smoking, the process of flavoring, or cooking...
many types of food, such as lutefisk
Lutefisk
Lutefisk or Lutfisk is a traditional dish of the Nordic countries and parts of the Midwest United States. It is made from aged stockfish or dried/salted whitefish and lye . It is gelatinous in texture, and has an extremely strong, pungent odor...
, green olives, canned mandarin oranges, hominy
Hominy
Hominy or nixtamal is dried maize kernels which have been treated with an alkali in a process called nixtamalization.The English term hominy is derived from the Powhatan language word for maize. Many other Native American cultures also made hominy and integrated it into their diet...
, lye roll
Lye roll
thumb|right|Typical lye roll.Lye rolls are a baked specialty in Germany , Austria, and Switzerland. They are made by glazing bread rolls with a lye solution before baking...
s, century egg
Century egg
Century egg or pidan , also known as preserved egg, hundred-year egg, thousand-year egg, thousand-year-old egg, and millennium egg, is a Chinese cuisine ingredient made by preserving duck, chicken or quail eggs in a mixture of clay, ash, salt, lime, and rice hulls for several weeks to several...
s, and pretzels. It is also used as a tenderizer in the crust of baked Cantonese moon cakes, and in lye-water "zongzi" (glutinous rice dumplings wrapped in palm leaves), in chewy southern Chinese noodles popular in Hong Kong and southern China, and in Japanese ramen. In the United States
United States
The United States of America is a federal constitutional republic comprising fifty states and a federal district...
, food-grade lye must meet the requirements outlined in the Food Chemicals Codex (FCC), as prescribed by the U.S. Food and Drug Administration (FDA). Lower grades of lye are commonly used as drain openers and oven cleaners and should not be used for food preparation.
Lye is a strong alkali, producing highly basic solutions. 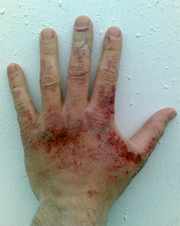 Solid sodium hydroxide or solutions containing high concentrations of sodium hydroxide may cause chemical burns, permanent injury or scarring, and blindness. Lye may be harmful or fatal if swallowed.

The combination of aluminium
Aluminium
Aluminium or aluminum is a silvery white member of the boron group of chemical elements. It has the symbol Al, and its atomic number is 13. It is not soluble in water under normal circumstances....
and sodium hydroxide results in a large production of hydrogen gas: 2Al(s) + 6NaOH(aq) → 3H2(g) + 2Na3AlO3(aq). Hydrogen gas is flammable; mixing lye (sodium hydroxide) and aluminium in a closed container is therefore dangerous. In addition to aluminium, lye (sodium hydroxide) may also react with magnesium
Magnesium
Magnesium is a chemical element with the symbol Mg, atomic number 12, and common oxidation number +2. It is an alkaline earth metal and the eighth most abundant element in the Earth's crust and ninth in the known universe as a whole...
, zinc
Zinc
Zinc , or spelter , is a metallic chemical element; it has the symbol Zn and atomic number 30. It is the first element in group 12 of the periodic table. Zinc is, in some respects, chemically similar to magnesium, because its ion is of similar size and its only common oxidation state is +2...
(galvanized), tin
Tin
Tin is a chemical element with the symbol Sn and atomic number 50. It is a main group metal in group 14 of the periodic table. Tin shows chemical similarity to both neighboring group 14 elements, germanium and lead and has two possible oxidation states, +2 and the slightly more stable +4...
, chromium
Chromium
Chromium is a chemical element which has the symbol Cr and atomic number 24. It is the first element in Group 6. It is a steely-gray, lustrous, hard metal that takes a high polish and has a high melting point. It is also odorless, tasteless, and malleable...
, brass
Brass
Brass is an alloy of copper and zinc; the proportions of zinc and copper can be varied to create a range of brasses with varying properties.In comparison, bronze is principally an alloy of copper and tin...
, and bronze
Bronze
Bronze is a metal alloy consisting primarily of copper, usually with tin as the main additive. It is hard and brittle, and it was particularly significant in antiquity, so much so that the Bronze Age was named after the metal...
to produce hydrogen
Hydrogen
Hydrogen is the chemical element with atomic number 1. It is represented by the symbol H. With an average atomic weight of , hydrogen is the lightest and most abundant chemical element, constituting roughly 75% of the Universe's chemical elemental mass. Stars in the main sequence are mainly...
gas and is therefore dangerous.

Lye is a deliquescent salt and has a strong affinity for moisture. Lye will deliquesce (dissolve or melt) when exposed to open air. It will absorb a relatively large amount of water from the atmosphere (air) if exposed to it. Eventually, it will absorb enough water to form a liquid solution because it will dissolve in the water it absorbs.

Hygroscopic substances are often used as desiccant
Desiccant
A desiccant is a hygroscopic substance that induces or sustains a state of dryness in its local vicinity in a moderately well-sealed container....
s to draw moisture away from water-sensitive items. Desiccants should never be placed inside a canister of lye because lye has much stronger hygroscopic properties than activated carbon
Carbon
Carbon is the chemical element with symbol C and atomic number 6. As a member of group 14 on the periodic table, it is nonmetallic and tetravalent—making four electrons available to form covalent chemical bonds...
and silica gel
Silica gel
Silica gel is a granular, vitreous, porous form of silica made synthetically from sodium silicate. Despite its name, silica gel is a solid. It is a naturally occurring mineral that is purified and processed into either granular or beaded form...
(the most common ingredients in commercial desiccant packets) and will pull and absorb the water from the desiccant packets.

Lye should be stored in air-tight plastic containers. Glass should never be used for storage as lye will slowly eat away at this material. The containers should be labeled to indicate the potential danger of the contents and stored away from children, pets, heat, and moisture.
The source of this article is wikipedia, the free encyclopedia.  The text of this article is licensed under the GFDL.