Encyclopedia
Yorkshire Pudding is a dish that originated in Yorkshire
Yorkshire
Yorkshire is a historic county of northern England and the largest in the United Kingdom. Because of its great size in comparison to other English counties, functions have been increasingly undertaken over time by its subdivisions, which have also been subject to periodic reform...
, England
England
England is a country that is part of the United Kingdom. It shares land borders with Scotland to the north and Wales to the west; the Irish Sea is to the north west, the Celtic Sea to the south west, with the North Sea to the east and the English Channel to the south separating it from continental...
. It is made from batter
Batter (cooking)
Batter is a semi-liquid mixture of one or more flours combined with liquids such as water, milk or eggs used to prepare various foods. Often a leavening agent such as baking powder is included to aerate and fluff up the batter as it cooks, or the mixture may be naturally fermented for this purpose...
and usually served with roast meat
Roasting
Roasting is a cooking method that uses dry heat, whether an open flame, oven, or other heat source. Roasting usually causes caramelization or Maillard browning of the surface of the food, which is considered by some as a flavor enhancement. Roasting uses more indirect, diffused heat , and is...
and gravy
Gravy
Gravy is a sauce made often from the juices that run naturally from meat or vegetables during cooking. In North America the term can refer to a wider variety of sauces and gravy is often thicker than in Britain...
. 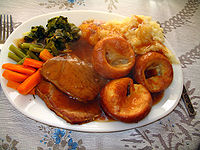 When wheat flour
Wheat flour
Wheat flour is a powder made from the grinding of wheat used for human consumption. More wheat flour is produced than any other flour. Wheat varieties are called "clean," "white," or "brown" if they have high gluten content, and they are called "soft" or "weak" flour if gluten content is low...
began to come into common use for making cakes and puddings, cooks in the north of England devised a means of making use of the fat that dropped into the dripping pan to cook a batter pudding while the meat roasted. In 1737 a recipe for 'A dripping pudding' was published in "The Whole Duty of a Woman":
Similar instructions were published in 1747 in ‘The Art of Cookery Made Plain and Simple’ by Hannah Glasse
Hannah Glasse
Hannah Glasse was an English cookery writer of the 18th century. She is best known for her cookbook, The Art of Cookery, first published in 1747...
under the title of 'Yorkshire pudding'. It was she who re-invented and re-named the original version, called Dripping Pudding, which had been cooked in England for centuries, although these puddings were much flatter than the puffy versions known today.

The Yorkshire pudding is a staple of the British
Great Britain
Great Britain or Britain is an island situated to the northwest of Continental Europe. It is the ninth largest island in the world, and the largest European island, as well as the largest of the British Isles...
Sunday lunch
Sunday roast
The Sunday roast is a traditional British main meal served on Sundays , consisting of roasted meat, roast potato or mashed potato, with accompaniments such as Yorkshire pudding, stuffing, vegetables and gravy....
and in some cases is eaten as a separate course prior to the main meat dish. This was the traditional method of eating the pudding and is still common in parts of Yorkshire today. Because the rich gravy from the roast meat drippings was used up with the first course, the main meat and vegetable course was often served with a parsley or white sauce
Béchamel sauce
Béchamel sauce , also known as white sauce, is one of the mother sauces of French cuisine and is used in many recipes of Italian cuisine, for example lasagne. It is used as the base for other sauces . It is traditionally made by whisking scalded milk gradually into a white roux...
.

It is often claimed that the purpose of the dish was to provide a cheap way to fill the diners - the Yorkshire pudding being much cheaper than the other constituents of the meal - thus stretching a lesser amount of the more expensive ingredients as the Yorkshire pudding was traditionally served first.

There are other uses for Yorkshire pudding. In various parts of the country - but particularly in the North - it is served as a snack with jam, or as a 'pudding' in the true sense, sometimes with jam and ice cream.

Yorkshire pudding is cooked by pouring a thin batter
Batter (cooking)
Batter is a semi-liquid mixture of one or more flours combined with liquids such as water, milk or eggs used to prepare various foods. Often a leavening agent such as baking powder is included to aerate and fluff up the batter as it cooks, or the mixture may be naturally fermented for this purpose...
made from milk (or water), flour and eggs into oiled then preheated baking pans or muffin tins. A popular batter is one-third cup milk, one-third cup flour per egg.