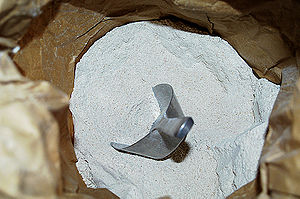 Wheat flour is a powder made from the grinding of wheat
Wheat
Wheat is a cereal grain, originally from the Levant region of the Near East, but now cultivated worldwide. In 2007 world production of wheat was 607 million tons, making it the third most-produced cereal after maize and rice...
used for human consumption. More wheat flour is produced than any other flour. Wheat varieties are called "clean," "white," or "brown" if they have high gluten content, and they are called "soft" or "weak" flour if gluten
Gluten
Gluten is a protein composite found in foods processed from wheat and related grain species, including barley and rye...
content is low. Hard flour, or bread flour, is high in gluten, with 12% to 14% gluten content, and has elastic toughness that holds its shape well once baked. Soft flour is comparatively low in gluten and so results in a finer or crumbly texture. Soft flour is usually divided into cake flour, which is the lowest in gluten, and pastry flour, which has slightly more gluten than cake flour.

In terms of the parts of the grain (the grass fruit
Caryopsis
In botany, a caryopsis is a type of simple dry fruit — one that is monocarpelate and indehiscent and resembles an achene, except that in a caryopsis the pericarp is fused with the thin seed coat....
) used in flour—the endosperm or protein/starchy part, the germ or protein/vitamin-rich part, and the bran or fibre part—there are three general types of flour. White flour is made from the endosperm only. Whole grain
Whole grain
Whole grains are cereal grains that contain cereal germ, endosperm, and bran, in contrast to refined grains, which retain only the endosperm. Whole grains can generally be sprouted while refined grains generally will not sprout. Whole-meal products are made by grinding whole grains in order to make...
or wholemeal flour is made from the entire grain, including bran
Bran
Bran is the hard outer layer of grain and consists of combined aleurone and pericarp. Along with germ, it is an integral part of whole grains, and is often produced as a by-product of milling in the production of refined grains. When bran is removed from grains, the grains lose a portion of their...
, endosperm
Endosperm
Endosperm is the tissue produced inside the seeds of most flowering plants around the time of fertilization. It surrounds the embryo and provides nutrition in the form of starch, though it can also contain oils and protein. This makes endosperm an important source of nutrition in human diet...
, and germ
Cereal germ
The germ of a cereal is the reproductive part that germinates to grow into a plant; it is the embryo of the seed. Along with bran, germ is often a by-product of the milling that produces refined grain products. Cereal grains and their components, such as wheat germ, rice bran, and maize may be used...
. A germ flour is made from the endosperm and germ, excluding the bran.