Encyclopedia
The Yankee class is the NATO classification for a type of nuclear-powered submarine
Submarine
A submarine is a watercraft capable of independent operation below the surface of the water. It differs from a submersible, which has more limited underwater capability...
that was constructed by the Soviet Union
Soviet Union
The Soviet Union , officially the Union of Soviet Socialist Republics , was a constitutionally socialist state that existed in Eurasia between 1922 and 1991....
from 1968 onward. 34 units were produced under Project 667A Navaga (after the fish
Navaga
Navaga is a relatively small species of fish in the cod family Gadidae. It inhabits the European arctic and subarctic waters of the Barents, White and Kara Seas, from the Kola Bay to the Ob river estuary....
) and Project 667AU Nalim ("burbot
Burbot
The burbot is the only gadiform fish inhabiting freshwaters. It is also known as mariah, the lawyer, and eelpout. It is closely related to the marine common ling and the cusk...
"). 24 were built at Severodvinsk
Severodvinsk
Severodvinsk is a city in the north of Arkhangelsk Oblast, Russia, located in the delta of the Northern Dvina River, west of Arkhangelsk. Administratively, it is incorporated as a town of oblast significance . Municipally, it is incorporated as Severodvinsk Urban Okrug. The city was founded as...
for the Northern Fleet while the remaining 10 built in Komsomolsk-na-Amurye
Komsomolsk-on-Amur
Komsomolsk-on-Amur is a city in Khabarovsk Krai, Russia, situated on the left bank of Amur River. It is located on the BAM railway line, northeast of Khabarovsk. Population: -Geography and climate:...
for the Pacific Fleet
Pacific Fleet (Russia)
The Pacific Fleet is the part of the Russian Navy that is stationed in the Pacific Ocean, which formerly secured the Far Eastern borders of the Soviet Union. The fleet headquarters is located at Vladivostok and a number of fleet bases are located in the Vladivostok area...
. Two Northern Fleet units were transferred to the Pacific. The lead unit K-137 Leninets, receiving its honorific name 11 April 1970, two and one half years after being commissioned.

The Yankees were the first class of Soviet subs to have comparable ballistic missile
Ballistic missile
A ballistic missile is a missile that follows a sub-orbital ballistic flightpath with the objective of delivering one or more warheads to a predetermined target. The missile is only guided during the relatively brief initial powered phase of flight and its course is subsequently governed by the...
firepower to their American
United States
The United States of America is a federal constitutional republic comprising fifty states and a federal district...
counterparts. Yankee subs were quieter than their Hotel-class predecessors and had smoother lines that improved their submerged performance. The ships were armed with 16 ballistic missiles during the Cold War
Cold War
The Cold War was the continuing state from roughly 1946 to 1991 of political conflict, military tension, proxy wars, and economic competition between the Communist World—primarily the Soviet Union and its satellite states and allies—and the powers of the Western world, primarily the United States...
, and served in the Soviet front lines: in the 1970s up to three Yankees were continually stationed in a "patrol box" east of Bermuda
Bermuda
Bermuda is a British overseas territory in the North Atlantic Ocean. Located off the east coast of the United States, its nearest landmass is Cape Hatteras, North Carolina, about to the west-northwest. It is about south of Halifax, Nova Scotia, Canada, and northeast of Miami, Florida...
and off the US Pacific coast. Their forward deployment was seen as a balance against the presence of American and NATO nuclear weapons in Western Europe.

One ship of the class, K-219
Soviet submarine K-219
K-219 was a Navaga-class ballistic missile submarine of the Soviet Navy. She carried 16 SS-N-6 liquid-fuel missiles powered by UDMH with IRFNA, equipped with an estimated 34 nuclear warheads....
, was lost on October 6, 1986 after an explosion and fire on board. The ship had been near Bermuda, and sank due to loss of buoyancy due to flooding. Four crewmen died before rescue arrived. At least one other ship in the class was involved in a collision with an American submarine. As a result of the SALT I and START I/II
START II
START II was a bilateral treaty between the United States of America and Russia on the Reduction and Limitation of Strategic Offensive Arms. It was signed by United States President George H. W...
treaties, all boats of the Yankee-class have been decommissioned and/or disarmed.

There were eight different versions of the Yankee subs (all of which are no longer in service): 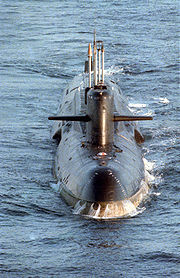 In the Tom Clancy
Tom Clancy
Thomas Leo "Tom" Clancy, Jr. is an American author, best known for his technically detailed espionage, military science, and techno thriller storylines set during and in the aftermath of the Cold War, along with video games on which he did not work, but which bear his name for licensing and...
book The Hunt for Red October
The Hunt for Red October
The Hunt for Red October is a 1984 novel by Tom Clancy. The story follows the intertwined adventures of Soviet submarine captain Marko Aleksandrovich Ramius and CIA analyst Jack Ryan.The novel was originally published by the U.S...
, Yankee-class submarines, along with the rest of the Soviet SSBN
Ballistic missile submarine
A ballistic missile submarine is a submarine equipped to launch ballistic missiles .-Description:Ballistic missile submarines are larger than any other type of submarine, in order to accommodate SLBMs such as the Russian R-29 or the American Trident...
fleet, return to their home ports to avoid confusing Soviet hunters during the frantic search for the Red October.

During an October 1986 episode of Saturday Night Live
Saturday Night Live
Saturday Night Live is a live American late-night television sketch comedy and variety show developed by Lorne Michaels and Dick Ebersol. The show premiered on NBC on October 11, 1975, under the original title of NBC's Saturday Night.The show's sketches often parody contemporary American culture...
, Weekend Update
Weekend Update
Weekend Update is a Saturday Night Live sketch that comments on and parodies current events. It is the show's longest running recurring sketch, having been on since the show's first broadcast, and is typically presented in the middle of the show immediately after the first musical performance...
"anchor" Dennis Miller
Dennis Miller
Dennis Miller is an American stand-up comedian, political commentator, actor, sports commentator, and television and radio personality. He is known for his critical assessments laced with pop culture references...
referred to K-219 (which had recently sunk near Bermuda) as Chernobyl
Chernobyl
Chernobyl or Chornobyl is an abandoned city in northern Ukraine, in Kiev Oblast, near the border with Belarus. The city had been the administrative centre of the Chernobyl Raion since 1932....
Breeze and suggested he had been the Soviet Union's intended entry into the America's Cup
America's Cup
The America’s Cup is a trophy awarded to the winner of the America's Cup match races between two yachts. One yacht, known as the defender, represents the yacht club that currently holds the America's Cup and the second yacht, known as the challenger, represents the yacht club that is challenging...
yacht race.
The source of this article is wikipedia, the free encyclopedia.  The text of this article is licensed under the GFDL.