K-219 was a Navaga-class ballistic missile submarine
Yankee class submarine
The Yankee class is the NATO classification for a type of nuclear-powered submarine that was constructed by the Soviet Union from 1968 onward. 34 units were produced under Project 667A Navaga and Project 667AU Nalim...
(NATO reporting name
NATO reporting name
NATO reporting names are classified code names for military equipment of the Eastern Bloc...
"Yankee I") of the Soviet Navy
Soviet Navy
The Soviet Navy was the naval arm of the Soviet Armed Forces. Often referred to as the Red Fleet, the Soviet Navy would have played an instrumental role in a Warsaw Pact war with NATO, where it would have attempted to prevent naval convoys from bringing reinforcements across the Atlantic Ocean...
. She carried 16 (later 15) SS-N-6
R-27 (missile)
The R-27 Zyb was a submarine-launched ballistic missile developed by the Soviet Union and employed by the Soviet Navy from 1968 through 1988. NATO assigned the missile the reporting name SS-N-6 Serb. In the USSR, it was given the GRAU index 4K10...
liquid-fuel missiles powered by UDMH with IRFNA
Red fuming nitric acid
Red fuming nitric acid is a storable oxidizer used as a rocket propellant. It consists mainly of nitric acid , also containing 13% dinitrogen tetroxide and 3% water. The dissolved nitrogen dioxide is very concentrated and can be found at room temperature...
, equipped with an estimated 34 nuclear warheads.

K-219 was involved in what has become one of the most controversial submarine incidents in the Cold War
Cold War
The Cold War was the continuing state from roughly 1946 to 1991 of political conflict, military tension, proxy wars, and economic competition between the Communist World—primarily the Soviet Union and its satellite states and allies—and the powers of the Western world, primarily the United States...
.

On 3 October 1986, while on patrol 680 miles (1,094.4 km) northeast of Bermuda
Bermuda
Bermuda is a British overseas territory in the North Atlantic Ocean. Located off the east coast of the United States, its nearest landmass is Cape Hatteras, North Carolina, about to the west-northwest. It is about south of Halifax, Nova Scotia, Canada, and northeast of Miami, Florida...
, K-219 suffered an explosion and fire in a missile tube. The seal in a missile hatch cover failed, allowing seawater to leak into the missile tube and react with residue from the missile's liquid fuel. The Soviet Navy claimed that the leak was caused by a collision with the submarine
Submarine
A submarine is a watercraft capable of independent operation below the surface of the water. It differs from a submersible, which has more limited underwater capability...
. Augusta was certainly operating in proximity, but the United States Navy
United States Navy
The United States Navy is the naval warfare service branch of the United States Armed Forces and one of the seven uniformed services of the United States. The U.S. Navy is the largest in the world; its battle fleet tonnage is greater than that of the next 13 largest navies combined. The U.S...
denies any collision. K-219 had previously experienced a similar casualty; one of her missile tubes was already disabled and welded shut, having been permanently sealed after an explosion caused by reaction between seawater leaking into the silo and missile fuel residue. 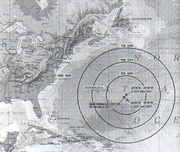 The authors of the book Hostile Waters
Hostile Waters (book)
Hostile Waters is a 1997 nonfiction book by Peter Huchthausen, Igor Kurdin and R. Alan White that describes the 1986 loss of the Soviet submarine K-219 off Bermuda....
reconstructed the incident from descriptions by the survivors, ships' logs, the official investigations, and participants both ashore and afloat from the Soviet and the American sides. Shortly after 0530 Moscow time, seawater leaking into silo six of K-219 reacted with missile fuel, producing nitric acid
Nitric acid
Nitric acid , also known as aqua fortis and spirit of nitre, is a highly corrosive and toxic strong acid.Colorless when pure, older samples tend to acquire a yellow cast due to the accumulation of oxides of nitrogen. If the solution contains more than 86% nitric acid, it is referred to as fuming...
. K-219 weapons officer Alexander Petrachkov attempted to cope with this by disengaging the hatch cover and venting the missile tube to the sea. Shortly after 0532, an explosion occurred in silo six. The remains of the RSM-25 rocket and its two warheads were ejected from silo six into the sea.

Three sailors were killed outright in the explosion. The vessel surfaced to permit its twin nuclear reactors to be shut down, which was only accomplished when a 19-year old enlisted seaman, Sergei Preminin
Sergei Preminin
Sergei Preminin was a Russian sailor who sacrificed his life on the submarine K-219, when he manually prevented an impending meltdown by means of a reactor SCRAM.-Biography:Preminin's father was an electrician and his mother worked in a flax factory...
, sacrificed his life to secure one of the onboard reactors. He had secured it and tried to reach his comrades on the other side of a door, but he couldn't open it and died in the reactor compartment. Captain Second Rank Igor Britanov
Igor Britanov
Captain Second Rank Igor Anatolievich Britanov, Soviet Navy was the captain of the Soviet missile submarine K-219 when it sank off the coast of Bermuda on October 3, 1986.-The incident on K-219:...
was ordered to have the ship towed by a Soviet freighter back to Gadzhievo, her home port, some 7000 kilometres (4,349.6 mi) away.

Although a towline was attached, towing attempts were unsuccessful, and after subsequent poison gas leaks into the final aft compartments and against orders, Britanov ordered the crew to evacuate onto the towing ship. Britanov remained aboard K-219.

Displeased with Britanov's inability to repair his submarine and continue his patrol, Moscow ordered Valery Pshenichny, K-219’s security officer, to assume command, transfer the surviving crew back to the submarine, and return to duty. Before those orders could be carried out, however, the flooding reached a point beyond recovery and on 6 October 1986 the K-219 sank to the bottom of the Hatteras Abyssal Plain
Abyssal plain
An abyssal plain is an underwater plain on the deep ocean floor, usually found at depths between 3000 and 6000 metres. Lying generally between the foot of a continental rise and a mid-ocean ridge, abyssal plains cover more than 50% of the Earth’s surface. They are among the flattest, smoothest...
, more than three miles down. in a depth of about 6,000 m (18,000 ft). While the proximate cause of the sinking is unknown, some evidence indicates Britanov may have scuttled her. K-219s full complement of nuclear weapons was lost along with the vessel.

In 1988, the Soviet hydrographic research ship Keldysh
Akademik Mstislav Keldysh
The R/V Akademik Mstislav Keldysh is a 6,240 ton Russian scientific research vessel. It is best known as the support vessel of the Mir submersibles. The vessel has made over 50 voyages, is owned by the Moscow-based Shirshov Institute of Oceanology of the Russian Academy of Science and is...
positioned itself over the wreck of K-219, and found the submarine sitting upright on the sandy bottom. It had broken in two aft of the conning tower. Several missile silo hatches had been forced open, and the missiles, along with the nuclear warheads they contained, were gone.

Preminin was posthumously awarded the Order of the Red Star
Order of the Red Star
Established on 6 April 1930, the Order of the Red Star was an order of the Soviet Union, given to Red Army and Soviet Navy personnel for "exceptional service in the cause of the defense of the Soviet Union in both war and peace". It was established by Resolution of the Presidium of the CEC of the...
for his bravery in securing the reactors. Britanov was charged with negligence, sabotage, and treason. He was never imprisoned, but waited for his trial in Sverdlovsk
Yekaterinburg
Yekaterinburg is a major city in the central part of Russia, the administrative center of Sverdlovsk Oblast. Situated on the eastern side of the Ural mountain range, it is the main industrial and cultural center of the Urals Federal District with a population of 1,350,136 , making it Russia's...
. In May 1987, after a new Defense Minister took office in Moscow, the charges against Britanov were dismissed.

In 1997, the British
United Kingdom
The United Kingdom of Great Britain and Northern IrelandIn the United Kingdom and Dependencies, other languages have been officially recognised as legitimate autochthonous languages under the European Charter for Regional or Minority Languages...
BBC
BBC
The British Broadcasting Corporation is a British public service broadcaster. Its headquarters is at Broadcasting House in the City of Westminster, London. It is the largest broadcaster in the world, with about 23,000 staff...
television film Hostile Waters
Hostile Waters (film)
Hostile Waters is a British 1997 television film about the loss of the K-219, a Yankee I class nuclear ballistic missile sub. The film stars Rutger Hauer as the commander of K-219 and claims to be based on the true story. The film was produced by World Productions for the BBC and HBO, in...
, co-produced with HBO and starring Rutger Hauer, Martin Sheen
Martin Sheen
Ramón Gerardo Antonio Estévez , better known by his stage name Martin Sheen, is an American film actor best known for his performances in the films Badlands and Apocalypse Now , and in the television series The West Wing from 1999 to 2006.He is considered one of the best actors never to be...
, and Max von Sydow
Max von Sydow
Max von Sydow is a Swedish actor. He has also held French citizenship since 2002. He has starred in many films and had supporting roles in dozens more...
, was released in the United States by Warner Bros.
Warner Bros.
Warner Bros. Entertainment, Inc., also known as Warner Bros. Pictures or simply Warner Bros. , is an American producer of film and television entertainment.One of the major film studios, it is a subsidiary of Time Warner, with its headquarters in Burbank,...
It was based on the book by the same name mentioned above, which claimed to describe the loss of K-219. In 2001, Captain Britanov filed suit, claiming Warner Bros. did not seek or get his permission to use his story or his character, and that the film did not portray the events accurately and made him look incompetent. After three years of hearing, the court ruled in Britanov's favor. Russian media reported a settlement on the order of several tens of thousands of dollar
United States dollar
The United States dollar , also referred to as the American dollar, is the official currency of the United States of America. It is divided into 100 smaller units called cents or pennies....
s.

The former Soviet Union claimed that the damage to K-219 was caused by a collision with Augusta. Officially, the U.S. Government continues to deny that this was the case. The U.S. Navy issued the following statement regarding the book and film:

The United States Navy normally does not comment on submarine operations, but in the case, because the scenario is so outrageous, the Navy is compelled to respond.
The United States Navy categorically denies that any U.S. submarine collided with the Russian Yankee submarine (K-219) or that the Navy had anything to do with the cause of the casualty that resulted in the loss of the Russian Yankee submarine.

An article on the US Navy's website posted by Captain 1st Rank (Ret.) Igor Kurdin (former XO of K-219) and Lieutenant Commander Wayne Grasdock denied any collision between K-219 and Augusta. Captain Britanov himself also denies a collision. He has stated that he was not asked to be a guest speaker at Russian functions because he refuses to follow the Russian government's interpretation of the K-219 incident.