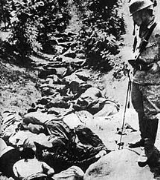 Before the adoption of Hanyu Pinyin, the city's name was typically Romanized
Romanization of Chinese
The romanization of Mandarin Chinese is the use of the Latin alphabet to write Chinese. Because Chinese is a tonal language with a logographic script, its characters do not represent phonemes directly. There have been many systems of romanization throughout history...
as Suchow, although also appearing as Hsu-chou, Hsuchow, and Hsüchow.

Liu Bang, first emperor of the Han Dynasty
Han Dynasty
The Han Dynasty was the second imperial dynasty of China, preceded by the Qin Dynasty and succeeded by the Three Kingdoms . It was founded by the rebel leader Liu Bang, known posthumously as Emperor Gaozu of Han. It was briefly interrupted by the Xin Dynasty of the former regent Wang Mang...
(206 BC–AD 220), was born in Pei County, Xuzhou. At the beginning of the Han Dynasty, Xuzhou became part of the Kingdom of Chu, a principality ruled by relatives of the royal Liu family. Initially, Liu Bang allowed his relatives to rule parts of the country since they were assumed to be the most trustworthy. However, the Kingdom of Chu under third generation ruler Liu Wu rebelled against the central authority during the Rebellion of the Seven Princes and was defeated. His tomb was recently excavated near Xuzhou.

After the Yellow River
Yellow River
The Yellow River or Huang He, formerly known as the Hwang Ho, is the second-longest river in China and the sixth-longest in the world at the estimated length of . Originating in the Bayan Har Mountains in Qinghai Province in western China, it flows through nine provinces of China and empties into...
began to change course during the Song Dynasty
Song Dynasty
The Song Dynasty was a ruling dynasty in China between 960 and 1279; it succeeded the Five Dynasties and Ten Kingdoms Period, and was followed by the Yuan Dynasty. It was the first government in world history to issue banknotes or paper money, and the first Chinese government to establish a...
(AD 960–1279), heavy silting at the Yellow River estuary forced the river to channel its flow into the lower Huai River tributary. The region became barren thereafter due to persistent flooding, nutrient depletion and salination of the once fertile soil.


These are further divided into 157 township-level divisions.

Xuzhou is located in the southeast of the North China Plain
North China Plain
The North China Plain is based on the deposits of the Yellow River and is the largest alluvial plain of eastern Asia. The plain is bordered on the north by the Yanshan Mountains and on the west by the Taihang Mountains edge of the Shanxi plateau. To the south, it merges into the Yangtze Plain...
. Xuzhou has a monsoon
Monsoon
Monsoon is traditionally defined as a seasonal reversing wind accompanied by corresponding changes in precipitation, but is now used to describe seasonal changes in atmospheric circulation and precipitation associated with the asymmetric heating of land and sea...
-influenced humid subtropical climate
Humid subtropical climate
A humid subtropical climate is a climate zone characterized by hot, humid summers and mild to cool winters...
(Koppen
Köppen climate classification
The Köppen climate classification is one of the most widely used climate classification systems. It was first published by Crimea German climatologist Wladimir Köppen in 1884, with several later modifications by Köppen himself, notably in 1918 and 1936...
Cwa), with cool winters, warm springs, long, hot and humid summers, and crisp autumns. Monthly daily averages range from 0.4 °C (32.7 °F) in January to 27.1 °C (80.8 °F) in July. Snow may occur during winter, though rarely heavily. Precipitation is light in winter, and the annual total of 830 millimetres (32.7 in) is heavily concentrated from May to September.

The most important industries in Xuzhou are machinery, energy and food production.

Xuzhou cuisine is closely related to Shandong cuisine
Shandong cuisine
Shandong cuisine , in Chinese more commonly known as Lu cuisine , is one the Eight Culinary Traditions of China and is also ranked among the four most influential among these . It is derived from the native cooking styles of Shandong, an eastern coastal province of China...
's Jinan
Jinan
Jinan is the capital of Shandong province in Eastern China. The area of present-day Jinan has played an important role in the history of the region from the earliest beginnings of civilisation and has evolved into a major national administrative, economic, and transportation hub...
-style. Xuzhou's most well known foods include bǎzi ròu (pork belly, and other items stewed in a thick broth), sha tang
Sha tang
Sha tang is a dish that originated in the city of Xuzhou in Jiangsu Province, but which also has origins in south-eastern Shandong Province. The original version of the soup was made with wild fowl, but the base is now chicken broth, thickened with various grains, and flavored with black...
(

Another one of Xuzhou's famous dishes is di guo (地锅) style cooking which places ingredients with a spicy sauce in a deep black skillet and cooks little pieces of flatbread on the side or top. Common staples of 地锅 style cooking include: chicken, fish, lamb, pork rib and eggplant.

Tourist attractions in Xuzhou include Yunlong Mountain (Cloud Dragon Mountain) and the nearby Yunlong Lake, which set near the downtown region. There are also Xuzhou Museum and Han Dynasty Stone Carvings museum next to the Yunlong Mountain.

The most important places of interest in Xuzhou are the relics of Han Dynasty, including Terracotta Army of Han, Mausoleum of the Emperors of Han and the art of stone graving.

Xuzhou Guanyin Airport serves the area with scheduled passenger flights to major airports in China including Beijing, Shanghai, Nanjing, Hong Kong and many other cities.

The Xuzhou Railway Station is one of the largest Chinese railway stations. Xuzhou is one of the most important railway hubs in China. It is the interchange station of Jinghu Railway
Jinghu railway
The Beijing–Shanghai Railway or Jinghu railway is a railway line in China between Beijing and Shanghai. The line has a total length of 1,462 kilometres and connects the municipalities of Beijing, Tianjin, and Shanghai, as well as the provinces of Hebei, Shandong, Anhui and Jiangsu...
, Longhai Railway and Hasan Railway. There is also a constructing hub of express railway in the eastern suburb of Xuzhou, which will be the hub of Jinghu Express Railway and Xulan Express Railway.

Saint-Etienne
Saint-Étienne
Saint-Étienne is a city in eastern central France. It is located in the Massif Central, southwest of Lyon in the Rhône-Alpes region, along the trunk road that connects Toulouse with Lyon...
, France (March 27, 1984) Handa, Aichi
Handa, Aichi
is a city located in Aichi, Japan, which was founded on October 1, 1937. As of 2003, the city has an estimated population of 114,336 and the density of 2,421.35 persons per km²...
, Japan (May 27, 1993) Newark, New Jersey
Newark, New Jersey
Newark is the largest city in the American state of New Jersey, and the seat of Essex County. As of the 2010 United States Census, Newark had a population of 277,140, maintaining its status as the largest municipality in New Jersey. It is the 68th largest city in the U.S...
, United States (April 21, 1993) Leoben
Leoben
Leoben is a Styrian city in central Austria, located by the Mur river. With a population of about 25,000 it is a local industrial center and hosts the University of Leoben which specialises in mining...
, Austria (August 29, 1994) Bochum
Bochum
Bochum is a city in North Rhine-Westphalia, western Germany. It is located in the Ruhr area and is surrounded by the cities of Essen, Gelsenkirchen, Herne, Castrop-Rauxel, Dortmund, Witten and Hattingen.-History:...
, Germany (September 16, 1994) Greater Dandenong, Australia (September 12, 1996) Osasco
Osasco
Osasco is a municipality and city in São Paulo State, Brazil, is located in the Greater São Paulo and ranking 5th in population among São Paulo municipalities. The current mayor is Emidio Pereira de Souza ....
, Brazil Trumbull, Connecticut
Trumbull, Connecticut
Trumbull, a town in Fairfield County, Connecticut in the New England region of the United States, is bordered by the towns of Monroe, Shelton, Stratford, Bridgeport, Fairfield and Easton along Connecticut's Gold Coast. The population was 36,018 according to the 2010 census.Family Circle magazine...
, United States Kirovograd, Ukraine (August 31, 1996) Ryazan
Ryazan
Ryazan is a city and the administrative center of Ryazan Oblast, Russia. It is located on the Oka River southeast of Moscow. Population: The strategic bomber base Dyagilevo is just west of the city, and the air base of Alexandrovo is to the southeast as is the Ryazan Turlatovo Airport...
, Russia (May 3, 1998) Erfurt
Erfurt
Erfurt is the capital city of Thuringia and the main city nearest to the geographical centre of Germany, located 100 km SW of Leipzig, 150 km N of Nuremberg and 180 km SE of Hannover. Erfurt Airport can be reached by plane via Munich. It lies in the southern part of the Thuringian...
, Germany (November 26, 2005) Lanciano
Lanciano
Lanciano is a town and comune in the province of Chieti, part of the Abruzzo region of central Italy. It has 36,570 inhabitants as of 2008.The city is also known for the first recorded alleged Catholic Eucharistic Miracle.-History:...
, Italy (August 27, 2006) Érd
Érd
Érd is city and urban county in Pest county, Budapest metropolitan area, Hungary.-History:The area has been inhabited since ancient times. Archaeological findings indicate that prehistoric men lived here 50,000 years ago....
, Hungary (July 12, 2011)