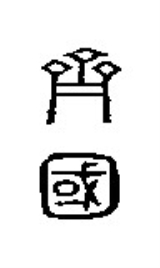 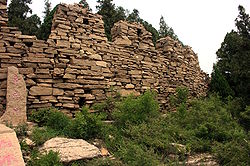 Qi was a powerful state during the Spring and Autumn Period and Period of the Warring States in ancient China
China
Chinese civilization may refer to:* China for more general discussion of the country.* Chinese culture* Greater China, the transnational community of ethnic Chinese.* History of China* Sinosphere, the area historically affected by Chinese culture...
. Its capital was Linzi
Linzi
Linzi was the capital of Qi from 859 BC to 221 BC during the Spring and Autumn Period and Warring States Period in China. The ruins of the city lie in modern day Linzi District, Shandong, China. The city was one of the largest and richest in China during the Spring and Autumn Period...
, now part of the modern day city of Zibo
Zibo
Zibo is a prefecture-level city in central Shandong province, People's Republic of China. It borders the provincial capital of Jinan to the west, Laiwu and Tai'an to the southwest, Linyi to the south, Weifang to the east, Dongying to the northeast, and Binzhou the north.Located in the middle part...
in Shandong Province.

Qi was founded around in 1046 B.C.
1040s BC
-Events and trends:* 1048 BC—Medon, King of Athens, dies after a reign of 20 years and is succeeded by his son Acastus.* 1046 BC—Following the Battle of Muye, King Wu of Zhou overthrows the Shang Dynasty Chinese King Di Xin and founds the Zhou Dynasty .* 1044 BC—On the death of Smendes I, king of...
as one of the many vassal states of the Zhou Dynasty
Zhou Dynasty
The Zhou Dynasty was a Chinese dynasty that followed the Shang Dynasty and preceded the Qin Dynasty. Although the Zhou Dynasty lasted longer than any other dynasty in Chinese history, the actual political and military control of China by the Ji family lasted only until 771 BC, a period known as...
. The first ruler of Qi was Jiang Shang, the most powerful official during that time. The Jiang family ruled Qi for several centuries before it was replaced by the Tian family in 386 BC
386 BC
Year 386 BC was a year of the pre-Julian Roman calendar. At the time, it was known as the Year of the Tribunate of Camillus, Cornelius, Fidenas, Cincinnatus, Pulvillus and Poplicola...
. In 221 BC, Qi was the last state of pre-Imperial China to be conquered by the State of Qin
Qin (state)
The State of Qin was a Chinese feudal state that existed during the Spring and Autumn and Warring States Periods of Chinese history...
, the final obstacle which allowed the Qin Dynasty
Qin Dynasty
The Qin Dynasty was the first imperial dynasty of China, lasting from 221 to 207 BC. The Qin state derived its name from its heartland of Qin, in modern-day Shaanxi. The strength of the Qin state was greatly increased by the legalist reforms of Shang Yang in the 4th century BC, during the Warring...
to consolidate the first centralized and imperial empire over China.

In 632 Qi helped Jin defeat Chu at the Battle of Chengpu
Battle of Chengpu
The Battle of Chengpu took place in 632 BC between the State of Jin and the State of Chu and its allies during the Spring and Autumn Period of Chinese history. It was the first great battle in the protracted conflict between the states of the Yellow River valley, and the states of the Yangtze...
. In 589 Qi was defeated by Jin. In 579 the four great powers of Qin (west), Jin (center), Chu (south) and Qi (east) met to declare a truce and limit their military strength. In 546 a similar four-power conference recognized several smaller states as satellites of Qi, Jin and Qin.


Subjects of House of Jiang