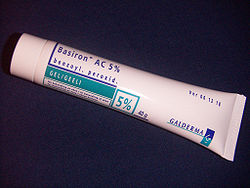 Benzoyl peroxide is an organic compound
Organic compound
An organic compound is any member of a large class of gaseous, liquid, or solid chemical compounds whose molecules contain carbon. For historical reasons discussed below, a few types of carbon-containing compounds such as carbides, carbonates, simple oxides of carbon, and cyanides, as well as the...
in the peroxide
Organic peroxide
Organic peroxides are organic compounds containing the peroxide functional group . If the R' is hydrogen, the compound is called an organic hydroperoxide. Peresters have general structure RCOOR. The O-O bond easily breaks and forms free radicals of the form RO·...
family. It consists of two benzoyl groups bridged by a peroxide
Peroxide
A peroxide is a compound containing an oxygen–oxygen single bond or the peroxide anion .The O−O group is called the peroxide group or peroxo group. In contrast to oxide ions, the oxygen atoms in the peroxide ion have an oxidation state of −1.The simplest stable peroxide is hydrogen peroxide...
link. Its structural formula
Structural formula
The structural formula of a chemical compound is a graphical representation of the molecular structure, showing how the atoms are arranged. The chemical bonding within the molecule is also shown, either explicitly or implicitly...
is [C6H5C(O)]2O2. It is one of the most important organic peroxides in terms of applications and the scale of its production. Benzoyl peroxide is used as an acne treatment, for improving flour, for bleaching hair and teeth, for polymerising polyester and many other uses.

Benzoyl peroxide was the first organic peroxide prepared by intentional synthesis. It was prepared by treating benzoyl chloride
Benzoyl chloride
Benzoyl chloride, also known as benzenecarbonyl chloride, is an organochlorine compound with the formula C6H5COCl. It is a colourless, fuming liquid with an irritating odour...
with barium peroxide
Barium peroxide
Barium peroxide is the chemical compound with the formula BaO2. This grey-white solid is one of the most common inorganic peroxides. Barium peroxide is an oxidizing agent, which is used for bleaching...
, a reaction that probably follows this stoichiometry
Stoichiometry
Stoichiometry is a branch of chemistry that deals with the relative quantities of reactants and products in chemical reactions. In a balanced chemical reaction, the relations among quantities of reactants and products typically form a ratio of whole numbers...
:

The oxygen-oxygen bond in peroxides is weak. Thus benzoyl peroxide readily undergoes homolysis
Homolysis
In general it means breakdown to equal pieces There are separate meanings for the word in chemistry and biology.-Homolysis in chemistry:...
(symmetrical scission), forming free radicals
Radical (chemistry)
Radicals are atoms, molecules, or ions with unpaired electrons on an open shell configuration. Free radicals may have positive, negative, or zero charge...
:


The symbol • indicates that the products are radicals; i.e., they contain at least one unpaired electron. Such species are highly reactive. The homolysis is usually induced by heating. The half-life
Half-life
Half-life, abbreviated t½, is the period of time it takes for the amount of a substance undergoing decay to decrease by half. The name was originally used to describe a characteristic of unstable atoms , but it may apply to any quantity which follows a set-rate decay.The original term, dating to...
of benzoyl peroxide is one hour at 92 °C. At 131 °C, the half-life is one minute.

Benzoyl peroxide breaks down in contact with skin, producing benzoic acid
Benzoic acid
Benzoic acid , C7H6O2 , is a colorless crystalline solid and the simplest aromatic carboxylic acid. The name derived from gum benzoin, which was for a long time the only source for benzoic acid. Its salts are used as a food preservative and benzoic acid is an important precursor for the synthesis...
and oxygen, neither of which is significantly toxic. It is important to note that the safety of the decomposition products does not mean that the substance itself is safe, as it is benzoyl peroxide's action as an oxidizing agent that is of importance. Hydrogen peroxide can be corrosive due to its oxidizing properties, but decomposes to form water and oxygen. Sodium hypochlorite (commonly known as "bleach") also shares these properties, but decomposes to form harmless products such as sodium chloride
Sodium chloride
Sodium chloride, also known as salt, common salt, table salt or halite, is an inorganic compound with the formula NaCl. Sodium chloride is the salt most responsible for the salinity of the ocean and of the extracellular fluid of many multicellular organisms...
.

Benzoyl peroxide for acne
Acne
Acne is a general term used for acneiform eruptions. It is usually used as a synonym for acne vulgaris, but may also refer to:*Acne aestivalis*Acne conglobata*Acne cosmetica*Acne fulminans*Acne keloidalis nuchae*Acne mechanica...
treatment is typically applied to the affected areas in gel or cream form, in concentrations of 2.5% increasing through the usually effective 5% to up to 10%. Research suggests that 5 and 10% concentrations are not significantly more effective than 2.5%, and 2.5% is usually better tolerated, though the majority of major studies comparing it to other treatments use the higher concentrations. It commonly causes initial dryness and sometimes irritation, although the skin
Skin
-Dermis:The dermis is the layer of skin beneath the epidermis that consists of connective tissue and cushions the body from stress and strain. The dermis is tightly connected to the epidermis by a basement membrane. It also harbors many Mechanoreceptors that provide the sense of touch and heat...
develops tolerance after a week or so. A small percentage of people are much more sensitive
Hypersensitivity
Hypersensitivity refers to undesirable reactions produced by the normal immune system, including allergies and autoimmunity. These reactions may be damaging, uncomfortable, or occasionally fatal. Hypersensitivity reactions require a pre-sensitized state of the host. The four-group classification...
to it and liable to suffer burning, itching, peeling and possibly swelling
Swelling (medical)
In medical parlance, swelling is the transient enlargement or protuberance in the body and may include tumors. According to cause, it may be congenital, traumatic, inflammatory, neoplastic or miscellaneous....
. It is sensible to apply the lowest concentration and build up as appropriate. Once tolerance is achieved, increasing the quantity or concentration and gaining tolerance at a higher level may give better subsequent acne clearance. Benzoyl peroxide works as a peeling agent, increasing skin turnover and clearing pores, thus reducing the bacterial count there as well as directly as an antimicrobial. It is often combined with salicylic acid
Salicylic acid
Salicylic acid is a monohydroxybenzoic acid, a type of phenolic acid and a beta hydroxy acid. This colorless crystalline organic acid is widely used in organic synthesis and functions as a plant hormone. It is derived from the metabolism of salicin...
, sulfur
Sulfur
Sulfur or sulphur is the chemical element with atomic number 16. In the periodic table it is represented by the symbol S. It is an abundant, multivalent non-metal. Under normal conditions, sulfur atoms form cyclic octatomic molecules with chemical formula S8. Elemental sulfur is a bright yellow...
, erythromycin
Erythromycin
Erythromycin is a macrolide antibiotic that has an antimicrobial spectrum similar to or slightly wider than that of penicillin, and is often used for people who have an allergy to penicillins. For respiratory tract infections, it has better coverage of atypical organisms, including mycoplasma and...
or clindamycin
Clindamycin
Clindamycin rINN is a lincosamide antibiotic. It is usually used to treat infections with anaerobic bacteria but can also be used to treat some protozoal diseases, such as malaria...
(antibiotics), giving rise to a combination drug, in benzoyl peroxide/clindamycin
Benzoyl peroxide/clindamycin
The drug combination benzoyl peroxide/clindamycin is a topical gel used for the treatment of acne. It is sold under the trade names Duac and BenzaClin...
. It can also be given with adapalene
Adapalene
Adapalene is a third-generation topical retinoid primarily used in the treatment of mild-moderate acne and is also used to treat keratosis pilaris as well as other skin conditions.- History :Adapalene was approved in 1996 by the U.S...
(a synthetic retinoid
Retinoid
The retinoids are a class of chemical compounds that are related chemically to vitamin A. Retinoids are used in medicine, primarily due to the way they regulate epithelial cell growth....
) in adapalene/benzoyl peroxide, a unique formulation considering most retinoids are deactivated by peroxides and acids.

Other common uses for benzoyl peroxide include dyeing hair, and as an active ingredient in teeth whitening systems. It is also used in the preparation of flour
Flour
Flour is a powder which is made by grinding cereal grains, other seeds or roots . It is the main ingredient of bread, which is a staple food for many cultures, making the availability of adequate supplies of flour a major economic and political issue at various times throughout history...
, and can be used as an initiator
Initiator
An initiator can refer to:* A person that takes an initiative in making something happen.* Modulated neutron initiator, a neutron source used in some nuclear weapons...
and catalyst for polyester
Polyester
Polyester is a category of polymers which contain the ester functional group in their main chain. Although there are many polyesters, the term "polyester" as a specific material most commonly refers to polyethylene terephthalate...
thermoset resins (as an alternative to the much more hazardous methyl ethyl ketone peroxide
Methyl ethyl ketone peroxide
Methyl ethyl ketone peroxide is an organic peroxide, a high explosive similar to acetone peroxide. MEKP is a colorless, oily liquid whereas acetone peroxide is a white powder at STP; MEKP is slightly less sensitive to shock and temperature, and more stable in storage.Dilute solutions of 30 to 60%...
).

In the U.S., the typical concentration for benzoyl peroxide is 2.5% to 10% for both prescription
Prescription drug
A prescription medication is a licensed medicine that is regulated by legislation to require a medical prescription before it can be obtained. The term is used to distinguish it from over-the-counter drugs which can be obtained without a prescription...
and over-the-counter drug
Over-the-counter drug
Over-the-counter drugs are medicines that may be sold directly to a consumer without a prescription from a healthcare professional, as compared to prescription drugs, which may be sold only to consumers possessing a valid prescription...
preparations that are used in treatment for acne. Higher concentrations are used for hair bleach and teeth whitening. Benzoyl peroxide, like most peroxide
Peroxide
A peroxide is a compound containing an oxygen–oxygen single bond or the peroxide anion .The O−O group is called the peroxide group or peroxo group. In contrast to oxide ions, the oxygen atoms in the peroxide ion have an oxidation state of −1.The simplest stable peroxide is hydrogen peroxide...
s, is a powerful bleaching agent
Bleach
Bleach refers to a number of chemicals that remove color, whiten, or disinfect, often via oxidation. Common chemical bleaches include household chlorine bleach , lye, oxygen bleach , and bleaching powder...
. Contact with fabric
Fabric
A fabric is a textile material, short for "textile fabric".Fabric may also refer to:*Fabric , the spatial and geometric configuration of elements within a rock*Fabric , a nightclub in London, England...
s or hair
Hair
Hair is a filamentous biomaterial, that grows from follicles found in the dermis. Found exclusively in mammals, hair is one of the defining characteristics of the mammalian class....
can cause permanent color dampening almost immediately. Even secondary contact can cause bleaching. For example, contact with a towel that has been used to wash off benzoyl peroxide-containing hygiene products.
In the paint industry, Benzoyl peroxide is used as a hardener in order to start the polymerization process in resins for instance PMMA resins can be polymerized with DiBenzoyl Peroxide.

In a 1977 study using a human maximization test, 76% of subjects acquired a contact sensitization to benzoyl peroxide. Formulations of 5% and 10% were used.

Unlike most organic compounds, benzoyl peroxide is potentially explosive, and, hence, it can cause fires without external ignition. The hazard is acute for the pure material, and for this reason, the compound is generally used as a solution or a paste. For example, cosmetics contain only a few percent of benzoyl peroxide and, thus, pose virtually no explosion risk.
The source of this article is wikipedia, the free encyclopedia.  The text of this article is licensed under the GFDL.