Encyclopedia
A way up structure, way up criterion, or geopetal indicator is a characteristic relationship observed in a sedimentary or volcanic rock, or sequence of rocks, that makes it possible to determine whether they are the right way up (i.e. in the attitude in which they were originally deposited) or have been overturned by subsequent deformation. This technique is particularly important in areas affected by thrusting
Thrust fault
A thrust fault is a type of fault, or break in the Earth's crust across which there has been relative movement, in which rocks of lower stratigraphic position are pushed up and over higher strata. They are often recognized because they place older rocks above younger...
and where there is a lack of other indications of the relative ages of beds within the sequence, such as in the Precambrian
Precambrian
The Precambrian is the name which describes the large span of time in Earth's history before the current Phanerozoic Eon, and is a Supereon divided into several eons of the geologic time scale...
where fossils are rare.

The original definition comes from Bruno Sander in 1936, translated from German to English in 1951, which states:

Geopetal Fabrics - All the widely distributed spacial characters of a fabric that enable us to determine what was the relation of "top" to "bottom" at the time when the rock was formed are termed geopetal fabrics. Such fabrics are mechanical and chemical internal deposition; grains on a boundary surface; cross-bedding, etc. 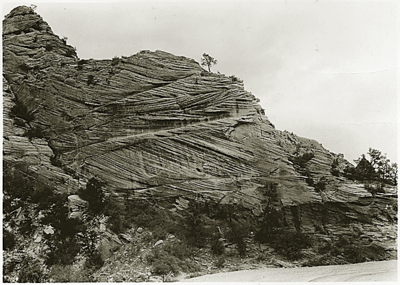 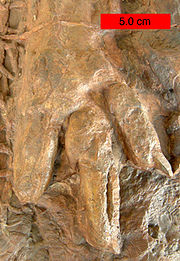 In general, geopetal seems to be used in the U.S., while way up structure is used in the UK (see talk page for more info). "Geopetal structure", in some circles, is used exclusively for the void fill example, and nothing else. Some geologists use neither term, and might use something else, like topping indicator.
The source of this article is wikipedia, the free encyclopedia.  The text of this article is licensed under the GFDL.