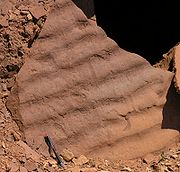 In geology
Geology
Geology is the science comprising the study of solid Earth, the rocks of which it is composed, and the processes by which it evolves. Geology gives insight into the history of the Earth, as it provides the primary evidence for plate tectonics, the evolutionary history of life, and past climates...
, ripple marks are sedimentary structures
Sedimentary structures
Sedimentary structures are those structures formed during sediment deposition.Sedimentary structures such as cross bedding, graded bedding and ripple marks are utilized in stratigraphic studies to indicate original position of strata in geologically complex terrains and understand the depositional...
(i.e. bedform
Bedform
A bedform is a depositional feature on the bed of a river or other body of flowing water that is formed by the movement of the bed material due to the flow. Bedforms are characteristic to the flow parameters, and are particularly to flow depth and velocity, and therefore the Froude...
s of the lower flow regime) and indicate agitation by water
Water
Water is a chemical substance with the chemical formula H2O. A water molecule contains one oxygen and two hydrogen atoms connected by covalent bonds. Water is a liquid at ambient conditions, but it often co-exists on Earth with its solid state, ice, and gaseous state . Water also exists in a...
(current
Ocean current
An ocean current is a continuous, directed movement of ocean water generated by the forces acting upon this mean flow, such as breaking waves, wind, Coriolis effect, cabbeling, temperature and salinity differences and tides caused by the gravitational pull of the Moon and the Sun...
or waves) or wind
Wind
Wind is the flow of gases on a large scale. On Earth, wind consists of the bulk movement of air. In outer space, solar wind is the movement of gases or charged particles from the sun through space, while planetary wind is the outgassing of light chemical elements from a planet's atmosphere into space...
.

Normal ripples: Or impact ripples occur in the lower part of the lower flow regime sands with grain sizes between 0.3-2.5 mm and normal ripples form wavelengths of 7-14 cm Normal ripples have straight or slightly sinuous crests approximately transverse to the direction of the wind.

Megaripples: Occur in the upper part of the lower flow regime where sand with bimodal particle size distribution forms unusually long wavelengths of 1-25 m where the wind is not strong enough to move the larger particles but strong enough to move the smaller grains by saltation
Saltation (geology)
In geology, saltation is a specific type of particle transport by fluids such as wind or water. It occurs when loose material is removed from a bed and carried by the fluid, before being transported back to the surface...
.

Crest: The point on a wave with the maximum value or height. It is the location at the peak of the wave cycle as shown in picture to the left.

Trough: The opposite of a crest, so the minimum value or height in a wave. It is the location at the very lowest point of a wave cycle also shown in picture to left.

Lee: The lee side has a steeper slope than the stoss. The lee is always on the back side of the ripple, which is also on the opposite side of where the current flow meets the ripple. The current flows down the lee side.

Stoss: The stoss is the side of a wave or ripple that has a gentle slope versus a steeper slope. Current always flows up the stoss side and down the lee side. This can be used to determine current flow during the time of ripple formation.